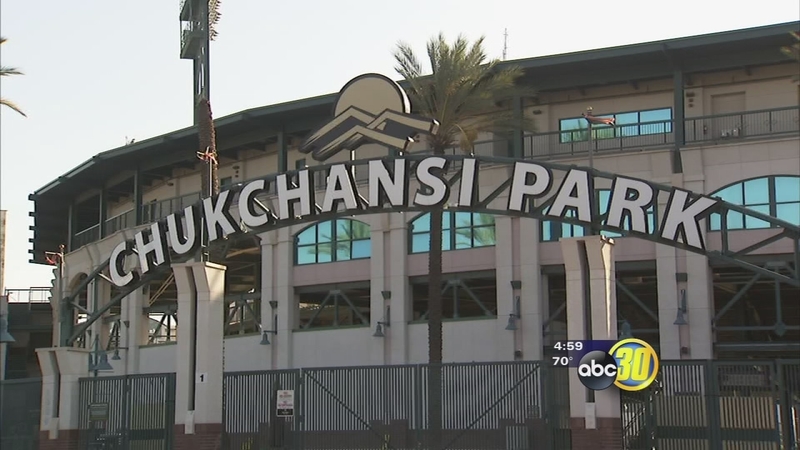 FRESNO, Calif. (KFSN) -- The stadium in downtown Fresno carries the name of Chukchansi -- even now, a year since the feds shut down the casino. But now there's a $1 million hole in the finances and a bill from the city is about to come due.

There are two possible solutions: Number one is simple. The casino gets back up and running and pays the million dollars it owes to keep its name up here on the stadium. Number two is more complicated. But if the team is sold, the city would get all the money it's owed.

The Fresno Grizzlies 2015 season ended in celebration as the team got its first taste of the playoffs since moving to a downtown stadium. City Hall is still celebrating its AAA championship. But the team's success hasn't changed the financial bottom line yet and the city is just a couple months away from handing the grizzlies a bill for more than $1 million.

In years past, Chukchansi's $1 million naming rights payment would've come in September. But with the casino shut down for more than a year, the money's not there right now. "At this point in time, I don't know what the answer is except we're going to have to be patient," said Fresno city council member Lee Brand. "We're going to have to be creative in finding solutions."

Chukchansi's chief operating officer, Christian Goode, tells Action News they can make the payment almost immediately after re-opening the casino. He won't commit to a time frame, but he says it'll be done before first pitch of the 2016 season.

And the Grizzlies are willing to wait.

"We've agreed with the casino to alter our payment schedule and give them a chance to reopen and get back on track with the payments," said Grizzlies general manager Derek Franks. He says it's being a good partner with Chukchansi, which has paid the bill early in some years to help the Grizzlies make ends meet.

In the meantime, the team is building on smaller sponsorships -- like the Farm Grown program. The ownership is looking to sell, and a new owner would have to settle up with the city before taking over. But for now, the best solution is the simplest.

"I mean, my hope is that the Chukchansi leadership will find a way to broker a deal to get the casino operational again to re-employ 1000 people in Madera County and then be in a position to pay their obligation to the Fresno Baseball Club," Brand said.