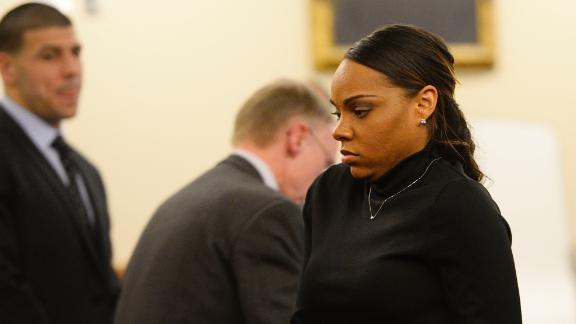 Shayanna Jenkins was called by prosecutors after being granted immunity, which means she was ordered to testify by the court or face time behind bars.

Jenkins, Hernandez's high school sweetheart and the mother of his 2-year-old daughter, appeared to be a reluctant and careful witness, pausing for long periods before answering and saying she couldn't remember details of the time surrounding the June 17, 2013, killing of Odin Lloyd, who was dating her younger sister. Lloyd's bullet-riddled body was found in an industrial park near the home Hernandez and Jenkins shared.

Hernandez has pleaded not guilty to killing Lloyd. The former tight end is being held without bail.

Some of what Jenkins said could hurt Hernandez, including that minutes after she dropped him off at a police station to be questioned about Lloyd's death, he directed her to give money to one of his co-defendants.

"He told me to meet up with Bo and give him money," Jenkins said, referring to Ernest Wallace.

Wallace and a third man, Carlos Ortiz, have pleaded not guilty in the killing and will be tried later.

Jenkins also told the jury that Hernandez was drunk in the hours before the slaying of Lloyd.

Hernandez, 25, watched Jenkins intently during her testimony, which lasted much of the day. She will return Monday to continue testifying. She previously pleaded not guilty to perjury in connection with the case. Prosecutors say she lied to a grand jury investigating the killing.

Jenkins, also 25, mostly avoided looking at Hernandez while she testified. During a sidebar, she looked at jurors and around the courtroom but not in his direction. It was a change from earlier in the trial, when she would sit behind Hernandez, whispering "I love you" and joking with him.

But she had not appeared in court for the past three weeks. On Friday, she was wearing the large diamond engagement ring she typically wears on her left ring finger.

She first appeared in court Friday morning outside the presence of jurors and was asked about what she would say on the witness stand. She indicated then that she would say it was important to Hernandez for her to get rid of a box from the basement and that she took efforts to conceal it as she took it out of the home, contradicting testimony she made before the grand jury. Prosecutors have indicated the box held evidence or even the weapon used to kill Lloyd, which has never been found.

Jenkins wasn't asked in detail about the box on the witness stand Friday but is likely to be asked about it Monday.

As she walked away from the stand following questioning, she mouthed something to Hernandez as she passed the defense table, her face looking ashen.

Later, in front of the jury, she said she once saw a gun in a junk drawer in the kitchen. When shown an example of a Glock .45, the kind of gun prosecutors say was the murder weapon, she testified it was the same color and shape but she was unsure whether it was the same size.

Police went to the home the night of June 17, 2013, after finding Lloyd's body with a key to a Hernandez rental car in his pocket.

Jenkins said she asked Hernandez what was going on.

"Do you recall what he said to you?" prosecutor William McCauley asked.

"He didn't know," she replied.

Jenkins testified she put their daughter in the car and drove Hernandez to the police station that night. Soon after, she said, he asked her to meet Wallace and give him money. She drove to Rhode Island and met him early June 18.

"He asked me if I was OK," Jenkins said. "He let me know that everything is going to be OK."

She said he then asked her for a certain amount of money, although she didn't remember how much. She said she gave him $500, the maximum she could withdraw from an ATM.

"I remember telling him to be safe," she said. "That's about it."

Among the people in the courtroom was her younger sister, Shaneah Jenkins, a 23-year-old law student, who sat next to Lloyd's mother.

Shayanna Jenkins, when asked by the prosecutor whether she is close with her sister, took a long pause, then shook her head, saying they are "estranged, kind of."

Before Jenkins took the stand, Superior Court Judge Susan Garsh announced that a male juror had been dismissed from the case, but she didn't elaborate. He is the third juror to be dismissed from the trial. Fifteen jurors remain, and three of those will be alternates chosen randomly after closing arguments.

Meanwhile, police arrested a man who they allege called in a bomb threat Thursday that forced the evacuation of the Massachusetts courthouse where Hernandez's trial is being held.

Fall River police on Friday announced the arrest of 55-year-old Paul Haddad of Westwood. Haddad was scheduled to be arraigned Friday. It isn't known if he has a lawyer who could comment on the accusations.

Police say Thursday's threat had nothing to do with Hernandez.

Police did not disclose a motive. Westwood and Fall River are about 50 miles apart.

The Fall River Justice Center was evacuated for about an hour on Thursday while the building was searched. Nothing dangerous was found.