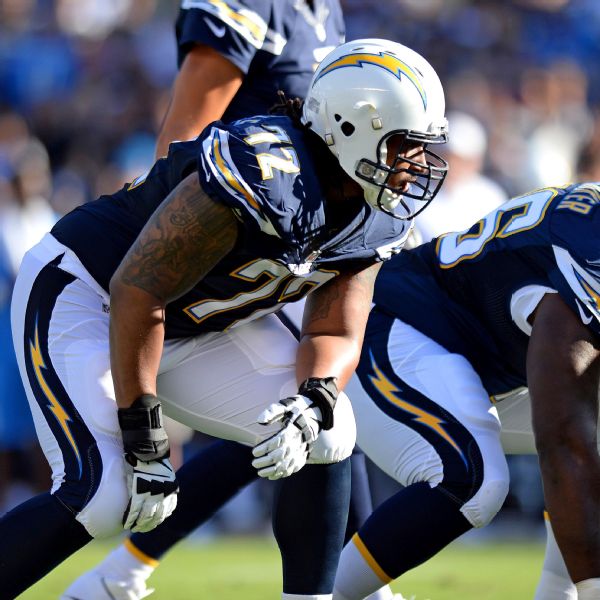 Joe Barksdale, who starts at right tackle for the Los Angeles Chargers, told the Los Angeles Times that he has battled severe depression and nearly took his life in November.

It was only after he had suicidal thoughts that Barksdale decided he would be open about his struggles with depression.

"If I could save another person, maybe that's why the attempts [to harm myself] didn't work," he told the L.A. Times.

In November, Barksdale learned that he would miss a third straight game after injuring his foot. Overcome with sadness, he told the newspaper that he went home and sharpened a knife before his wife, Brionna, persuaded him to put it down. They proceeded to talk until he was calm.

Barksdale, 29, said he was physically, emotionally and sexually abused as a child --"I was molested when I was younger. It happened," he told the L.A. Times -- which contributed to his feelings of insecurity and anxiety while growing up in inner-city Detroit, where he was bullied by older kids.

Barksdale now takes medication and is in therapy. Four years ago, he learned to play the guitar after a suggestion from former coach Jeff Fisher. He recently released his debut album, "Butterflies, Rainbows & Moonbeams."

After spending many years hiding his depression, Barksdale confided in a small handful of teammates, including quarterbackPhilip Rivers.

When his teammates told him it was "between us," Barksdale said, "My thing was, I'm telling you so that you can tell other people." Barksdale said that reaction showed the stigma of mental illness in the league.

But he hopes that by sharing his story publicly, he can make a difference.

"Some days, you can talk yourself out of it. Some days, you can't. Some days, it just feels impossible," he told the L.A. Times. "This is who I am. I am as depressed as I am black."
Report a correction or typo
Related topics:
sportsespnlos angeles chargersawarenessnflmental healthsuicidedepressionjoe barksdale
Copyright © 2020 ESPN Internet Ventures. All rights reserved.
More Videos
From CNN Newsource affiliates
TOP STORIES