Hoppertunity out with sore foot 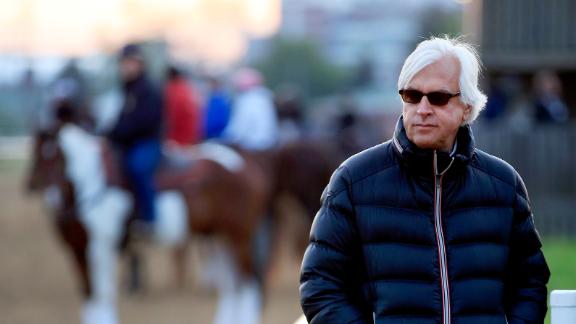 Trainer Bob Baffert announced Thursday morning that the Rebel Stakes winner and 6-1 second choice in the Derby morning line would be scratched.

"We're pretty sure it's the foot, but we just want to make sure that it's nothing else so we can continue on with him for the Preakness," Baffert said. "The timing is obviously horrible because we don't have enough time to work on the foot.

"Yesterday when he came out, he took a couple of steps that looked like something was bothering him. So we took a hoof tester and we saw his inside quarter was sore. We cut part of the shoe off. ... When we brought him out this morning, he was still a little bit off on that left front foot. He was warming up on it, but I knew if he was still like that tomorrow ... "

Mike Pegram, Karl Watson and Paul Weitman's Hoppertunity was to be shipped Thursday afternoon to Rood and Riddle Equine Hospital in Lexington, where Dr. Larry Bramlage will give him a precautionary full examination. Baffert said if Hoppertunity has only a bruised foot, he should be able to make the Preakness on May 17 at Pimlico Race Course.

"This is part of the business you don't like, but they're athletes and these things happen," Pegram said. "This happens a lot, but this just happened in the Kentucky Derby. You don't get that many shots. That's the reason you never apologize when you win.

"I'm just lucky to have partners like Paul and Karl, who are gentlemen and take it in stride. I can tell you we may have a happy face but we're dying inside."

Baffert said the Kentucky-bred son of Any Given Saturday will be examined Thursday night and results will be available Friday.

Hoppertunity worked four furlongs in 48 seconds at Churchill Downs on Wednesday. Baffert said it's possible that the off track contributed to the foot issue.

"We were sort of forced to work on a wet track, and it's tough because these can come up and bite you," he said. "But we still have Chitu, and he's the one that threw the shoe, and his feet are fine. The horse is OK; he was just not 100 percent this morning. It's too close to the race, so I pulled the plug.

"It hasn't really set in yet," said the trainer of three Derby winners. "Now we have to get him right. I'm disappointed for the owners. They're all here and were looking forward to a big race."

The scratch brings the Derby's recently added also-eligible list into play. But as of 9:45 a.m. ET Thursday, trainer Wesley Ward had not decided whether also-eligible Pablo Del Monte would run. Ward, a co-owner of the Blue Grass Stakes third-place finisher, said he will meet with co-owners Susan Magnier, Derrick Smith and Michael Tabor before a decision is made.

Ward, reached in Florida, had concerns about starting the horse from post 20 but said it would be a dream to start the Florida-bred son of Giant's Causeway in the Derby. Jockey Jeffrey Sanchez would have the mount if Pablo Del Monte is entered.

Hoppertunity was the 6-1 second choice in the morning line for the Derby. Churchill Downs quickly put out a new odds board, with oddsmaker Mike Battaglia making Wood Memorial winner Wicked Strong the 6-1 second choice. Arkansas Derby winner Danza and Risen Star Stakes winner Intense Holiday, both trained by Todd Pletcher, are the co-third choices at 8-1. Pablo Del Monte is at 50-1.

California Chrome, who is trained by Art Sherman, was the morning line favorite at 5-2.

Evan Hammonds contributed to this story.