LOS ANGELES -- It started most mornings over the summer around 3:30 a.m.

No matter if he was at the gym he had built on the set of "Space Jam 2" at the Warner Bros. Studios lot in Burbank, California, or at the Los Angeles Lakers' practice facility in El Segundo,LeBron James was up early to work out. His first season in Los Angeles wasn't a good one, with injuries and insults derailing his and the Lakers' hopes of reclaiming their place atop the NBA hierarchy.

He posted those workouts on social media, for his own accountability as much as anything else. But it was a statement to the rest of the league, too.

Giannis Antetokounmpo might be the league's reigning MVP. The LA Clippers might have beaten the Lakers for Kawhi Leonard in free agency.

But James wasn't giving up his place atop the league without a fight.

This weekend, James made his loudest statements yet as he led the Lakers to hard-fought wins over Antetokounmpo and the Milwaukee Bucks on Friday and Leonard's Clippers on Sunday with stout defense on the two men who have made the most direct challenges to his throne in recent years.

"LeBron was unbelievable," Lakers coach Frank Vogel said. "This was his best weekend in a Lakers uniform. He really dominated both games and helped close them out."

James finished with 28 points, 9 assists and 7 rebounds in Sunday's 112-103 win over the Clippers, giving the Lakers a win over the only team in the league that has defeated them twice this season.

The Clippers threatened to rally against the Lakers in the fourth quarter, just as they did in their win on Christmas Day. But James' defense and hustle plays set the tone for the Lakers down the stretch.

With 2:21 remaining in the game, James dove on the floor and out-wrestled 240-pound LA center Montrezl Harrell for a rebound. With 1:35 to go, he jumped in front of 218-pound Clippers power forward Marcus Morris Sr. and tried to draw a charge.

Neither play actually worked out in James' favor (Avery Bradley turned the ball over after James dove on the ground, recovered the loose ball and passed it to him, and James was whistled for a blocking foul on Morris), but they made an impression on his teammates.

"He didn't get rewarded for those plays, but for me, that didn't go unnoticed," Lakers backup point guard Rajon Rondo told ESPN. "He tried to take a charge. Then he's down on the court getting the loose ball.

"When you got the oldest guy on the team doing that, everybody else is going to follow. The plays he makes are contagious."

At James' behest, officials reviewed the blocking call on him, but there wasn't video evidence to overturn the call. James continued to assert that a charge should've been called, but then he effectively overturned the points himself by driving past Morris and scoring the Lakers' final five points on the next two possessions.

He drew a foul on a drive to the basket with 1:13 to go, sinking both free throws to extend the Lakers' lead back to 109-100. Then James blew past Morris -- for whom the Clippers beat the Lakers in a trade deadline move with the New York Knicks -- for a layup and foul shot with 40.8 seconds remaining.

James let out a growl and flexed his 35-year-old arms at the Clippers' home crowd after that final layup. Lakers fans who managed to procure tickets to the Clippers' home game serenaded him with chants of "M-V-P" as he stepped to the line.

After James checked out of the game with the Lakers up 112-100 with 31.4 seconds remaining, forward Kyle Kuzma put his hands over James' head in a "crowning" motion.

Whether or not James did enough this weekend to change the course of the MVP race, which Antetokounmpo is favored to win again, remains to be seen.

But James and the Lakers made some very loud statements this weekend. They beat the team with the best record in the league and the only team that had beaten them twice this season.

James won individual matchups against the reigning regular-season MVP (Antetokoumpo) and reigning Finals MVP (Leonard). The Lakers made their statements at the time of the season when a team needs to start believing in its strengths, not dwelling on its weaknesses.

"I prepare myself both in my body and my mind and to endure anything, even at this stage in my career," James said. "I know what it takes for me to prepare mentally and physically and go out and perform on a high level, and it's my responsibility to put this team in a position to be successful. They look at me as a leader. It's my job not only on the floor to give guys opportunities, get them great looks, but inspire them as well and show them I'm not slowing down, even at this stage in my career." 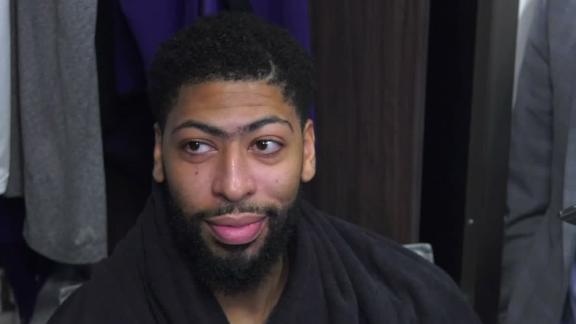 AD: LeBron is the MVP after victories over Bucks, Clippers
Anthony Davis argues that the way LeBron James played against the Bucks and the Clippers makes him the MVP of the season. 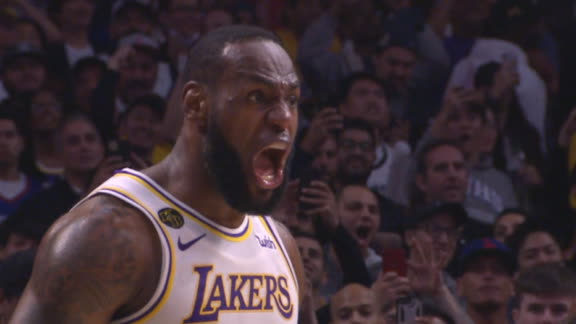 LeBron hyped as MVP chants ring out in Staples Center
LeBron James goes head-to-head with Marcus Morris Sr., hits an and-1 layup and gets hype. 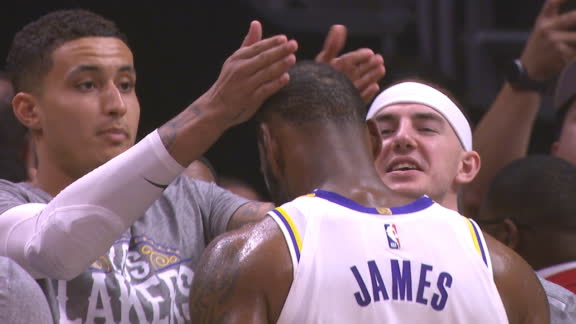 Kuzma crowns 'King' James during standing ovation in Staples Center
LeBron James receives a standing ovation as he exits the court for the final time, and Kyle Kuzma places an imaginary crown on his head. 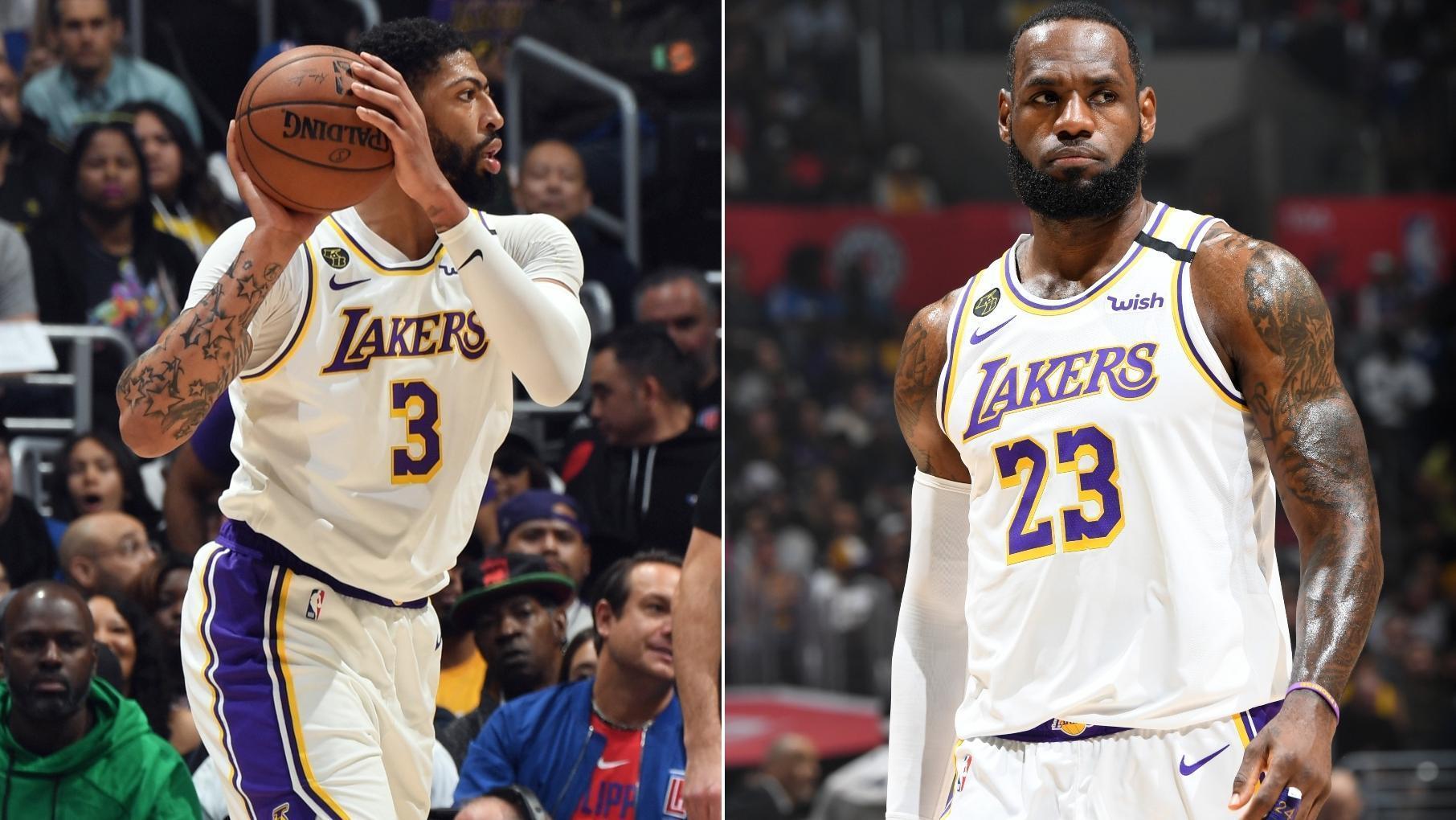