Hunter Strickland ejection jersey put up for auction, then pulled 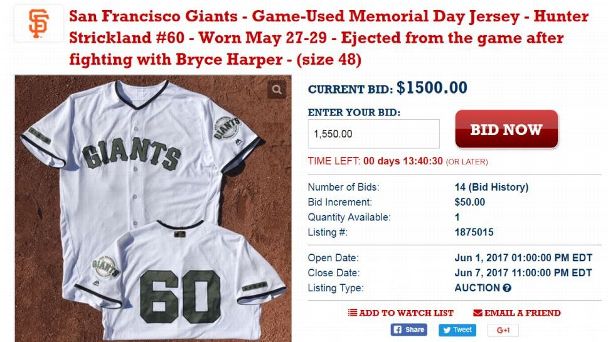 The San Francisco Giants jersey Hunter Strickland wore on Memorial Day when he was ejected for throwing at Bryce Harper was listed on MLB.com's auction site Wednesday before later being pulled.

The auction was ended at the request of the league, which was unaware the item was going to be made available, a source told ESPN's Darren Rovell on Thursday.

The jersey was listed with the description that it was worn by the ejected Giants pitcher. The auction had a highest bid of $1,500 before it was ended.

A source told ESPN that Major League Baseball executives weren't aware that the Giants were going to auction off Strickland's jersey from that game. Once they found out about it, they asked the Giants to pull the auction.

Items auctioned cannot be in bad taste. Selling a jersey of a player who was involved in a fight that resulted in suspensions could be seen as hypocritical.

Strickland was suspended six games for hitting Harper in the hip with a 98 mph fastball and then exchanging punches with the Washington Nationals outfielder after he charged the mound. Harper was suspended four games but ended up sitting three games after reaching an agreement with MLB to drop his appeal.

Strickland was pitching to Harper for the first time the two had met since the slugger hit two home runs off the 6-foot-4, 220-pound right-hander during the 2014 National League Division Series between the Nationals and Giants.
Report a correction or typo
Related topics:
sportsespnmlbhunter stricklandsan francisco giantsbryce harper
Copyright © 2020 ESPN Internet Ventures. All rights reserved.
More Videos
From CNN Newsource affiliates
TOP STORIES