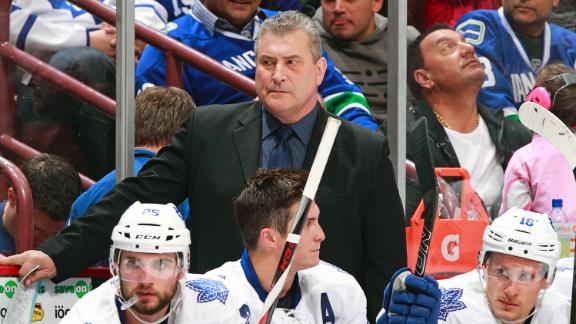 With the 2015 Stanley Cup playoffs approaching, now is a good time to reflect on an entertaining, action-packed regular season.


From the remarkable success of underdog teams like the Calgary Flames and Ottawa Senators, to the equally stunning decline of titans like the defending Stanley Cup champion Los Angeles Kings and 2014 Presidents' Trophy-winning Boston Bruins, there were plenty of surprises.


Let's take a look back at the biggest twists and turns of the past six months.

Perhaps the most confounding issue the league faced this season was the rampant spread of the mumps. Several teams -- including the Anaheim Ducks, Minnesota Wild, St. Louis Blues, New York Rangers, and Pittsburgh Penguins -- were forced to quarantine affected players to prevent further spread of the disease. A "patient zero" was never truly pinpointed as the lengthy incubation period made that determination difficult, but the league was forced to educate and inform its member clubs of health and safety precautions needed to prevent a future outbreak.


Many teams took a pre-emptive approach and had their players vaccinated to thwart any future cases. What quickly became a media firestorm eventually died down as the virus filtered out of the NHL ranks. A specialist with the CDC told ESPN.com that two incubation periods -- roughly 50 days -- would have to elapse without any new cases for the outbreak to have run its course, which puts the league in the clear for now. According to NHL deputy commissioner Bill Daly, the league is "happy with [the] response and steps that were taken this year in response to the outbreak." Daly told ESPN.com via email that there is "no indications that it remains a concern."

Not long after the Ray Rice scandal rocked the National Football League, the NHL had its own domestic violence case on its hand when Los Angeles Kings defenseman Slava Voynov was arrested in October for allegedly beating his wife, Marta Varlamova, inside their family home in Redondo Beach, California. The NHL acted swiftly, suspending him indefinitely with the criminal investigation ongoing. Voynov has not played a single game since his arrest and faces a felony battery charge that could land him in prison.


Most recently, his trial was postponed until July while a judge decides whether Varlamova can be compelled to testify in the state's case against her husband. Voynov showed up to his last court appearance on crutches after reportedly undergoing surgery to repair a torn Achilles tendon, though it is unclear how he sustained the injury.

The NHL is currently facing a lawsuit from several former players alleging that the league was negligent in omitting critical information about the risks and potential long-term effects of brain trauma. According to the complaint, the plaintiffs allege that the NHL "actively and purposefully concealed those dangers" and should be held accountable. Most recently, a judge in U.S. District Court in Minnesota, where the case is being heard, rejected the NHL's motion to dismiss on claims of time-sensitivity and jurisdictional issues, though the judge has yet to rule on the league's other motion to dismiss, which is based on labor-law pre-emption.

A bombshell report surfaced in November revealing that Columbus Blue Jackets defenseman Jack Johnson was forced to file for Chapter 11 bankruptcy after his parents left him in dire financial straits after monetizing his contract and entering him into high-risk loans. According to court documents obtained by ESPN.com, Johnson's parents bought a house in California with his money and without his knowledge, and also took out loans by leveraging his future earnings.


Almost all of Johnson's earnings from his nine-year career have been squandered, and his future earnings have been compromised as well. In a recent development, Johnson was named as a debtor in a complaint against former NFL player Will Allen, who is being charged by the Securities and Exchange Commission with running a Ponzi scheme involving Johnson and other professional athletes. A source close to Johnson said it is possible he will pursue legal action against Allen. Johnson's legal team has also applied to have his Chapter 11 bankruptcy filing converted to Chapter 7, though a ruling has yet to be made on that matter.

Three long summers finally caught up to the Kings. The defending champs were slow starters this season after hoisting the Cup in June and ran out of gas down the stretch. Injuries, suspensions and fatigue were main factors in the Kings' demise, a development few predicted would actually come to fruition.


Just as surprising was the precipitous decline of the Bruins, who were eliminated from playoff contention on the final day of the regular season. Like the Kings, the Bruins were hamstrung by salary-cap issues and injuries. But in the end, Claude Julien's bunch simply failed to meet expectations, putting far too much pressure on goaltender Tuukka Rask to stand on his head each night. What does this mean for the Bruins? Team exec Charlie Jacobs hinted earlier this season that there would be consequences for such an underachieving, disappointing effort, so it's only fair to wonder whether Julien and general manager Peter Chiarelli could lose their jobs.

The Senators were considered cooked by midseason, but they pulled off one of the most dazzling comebacks in NHL history with their magical march to the playoffs. That was made possible in large part by the stellar play of 27-year-old goaltender Andrew Hammond, who came out of nowhere to lead the Sens to the postseason. Hammond, an afterthought on the depth chart heading into the season, took over after injuries to Craig Anderson and Robin Lehner, and has not looked back.


Hammond has gone 20-1-2 as the Sens' starter, posting an impressive .941 save percentage and 1.79 goals-against average. Meanwhile, teammate Mark Stone made a strong second-half push for Calder Trophy consideration, with a rookie season of 26 goals and 64 points to help Ottawa get into a first-round playoff matchup against the Montreal Canadiens. Other Cinderella stories that deserve honorable mention: the Flames and Winnipeg Jets.

Detroit Red Wings coach Mike Babcock has held firm on a promise that he would not discuss his contract situation, though his future in Detroit (or elsewhere) remains the most pressing question heading into the offseason. With coaching vacancies already in Toronto and Buffalo, and several more sure to surface in the days ahead, speculation is building over where Babcock will land. Meanwhile, the veteran bench boss helped lead the Wings to their 24th consecutive playoff appearance.

Everything that could go wrong did go wrong for the Toronto Maple Leafs this season. The Leafs took a full-on nosedive during Brendan Shanahan's first season running the team. Head coach Randy Carlyle was fired midseason, star players Phil Kessel and Dion Phaneuf are reportedly being shopped and Nazem Kadri was benched for disciplinary reasons.


Beyond that, there were media blowups, stick-salute controversies, fans throwing jerseys on the ice and a litany of other debacles that resulted in massive house-cleaning. Shanahan fired or did not renew several people within the organization, including GM Dave Nonis, interim coach Peter Horachek and his assistants, as well as members of the team's scouting and player personnel staff.