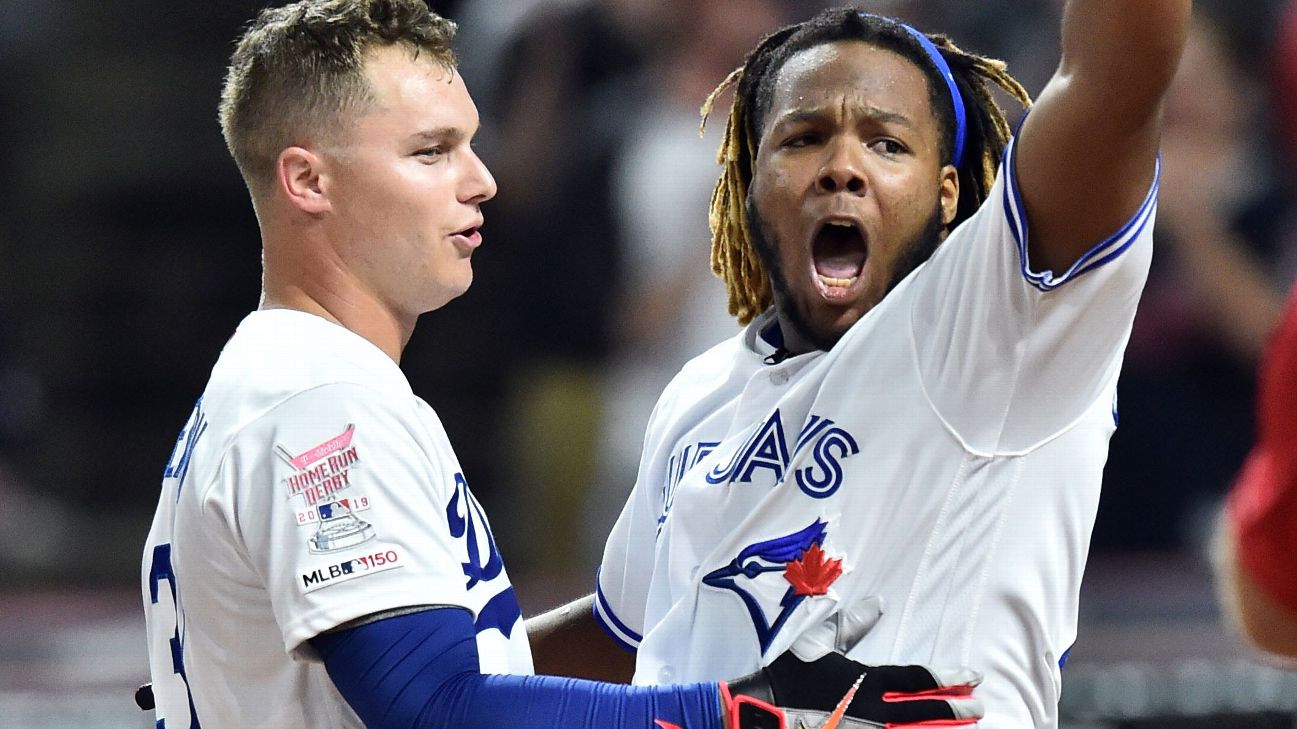 CLEVELAND -- On the night he hit more than seven miles' worth of home runs, a night that showed the world that he's far more than the name he inherited from his famous father, Vladimir Guerrero Jr. launched himself into the annals of Home Run Derby history by smashing baseballs in never-before-seen fashion. And that, it turns out, was tiring. Vlad Jr. just wanted a moment to himself, and when he finished answering the final question about his 91-home run performance at the 2019 Derby, he took a breath and said, "Ay dios mio."

Which, actually, summed up the night pretty well. Whether it was his record-setting first round, his epic second-round duel or his going-on-fumes final round, Vlad Jr., the 20-year-old Toronto Blue Jays rookie, will be the enduring memory of the 35th Derby. It would've been nice for him to beat the actual winner, New York Mets rookie Pete Alonso, and take the $1 million prize that came with the victory. Guerrero, like Mark McGwire and Josh Hamilton before him, instead settled for inspiring countless fans and viewers to utter the English translation of what he said exhaustedly as the evening neared its end: "Oh my God."

It's the most succinct summation of what took place on Monday at Progressive Field. Guerrero started the day with eight career major league home runs and questions about whether he belonged in the field when 181 big leaguers have hit more homers than he has this season. He erased some doubts when he deposited the first pitch he saw 462 feet off the scoreboard in left field, cleared them for good when he set a single-round record with 29 home runs in the first round and made them seem laughable after he outlastedLos Angeles Dodgers slugger Joc Pederson in a triple-overtime second-round battle he won 40-39.

Yes, Vlad Jr. hit 40 home runs in a single round: 29 of them in the standard four minutes with 30 seconds of bonus time for hitting balls so far, eight in the minute-long extra period, one in a three-swing tiebreaker and two more in another tiebreaker that Pederson simply couldn't match.

By the time Alonso hit his final home run to win the final 23-22, Guerrero's numbers almost defied belief. He saw 207 pitches. He swung at 195 of them. He homered on 91. He hit 38,641 feet worth of home runs -- the longest 488 feet, the shortest 373, the average more than 424. He finished with 34 more homers in his three rounds than Alonso. He had the seven hardest-hit balls. After one night, he has the second-most home runs in Derby history -- and nearly five times as many as his father, the Hall of Fame outfielder who won the 2007 Derby.

"He was the star of the show," said John Schneider, the Blue Jays coach who might have had the greatest vantage point in the stadium: He was pitching to Guerrero. Schneider didn't exactly take time to admire the balls like the crowd of 36,119. He did, however, see the fruits of his labor flying high into the sky again and again and again from a right-handed swing that is equal parts pretty and ferocious. Five times in the first round Vlad Jr. hit four consecutive pitches for home runs. He dispatched Matt Chapman, a last-second replacement for the top-seeded Christian Yelich, 29-13.

During a practice round this week, Guerrero hit 17 home runs. He wasn't satisfied with the result, Schneider said, but wasn't worried either. Guerrero, Schneider said, declared that he was going to hit 30 in the first round and knock out Yelich. He came close to 30 against Chapman and blew past it in his slugfest with Pederson.

Guerrero's most impressive stretch of the night came in the middle of the second round. In a 2-minute, 1-second window, he swung at 25 pitches and homered on 19 of them. It was reminiscent of Hamilton, who, in a previous format that didn't pit players head-to-head, homered 28 times on 38 swings.

"It's pretty standard for him," said Marcus Stroman, Guerrero's Blue Jays teammate. "It's easy. It's very easy. Didn't surprise me in the slightest."

Pederson's matching Guerrero's 29 home runs to force the minute-long overtime was a tad surprising, and his following Guerrero's eight home runs with eight of his own was perhaps even more so. Pederson was taking the volume approach, swinging 84 times to Guerrero's 73 in those five-and-a-half minutes. Given the advantage of going second, Pederson could only tie Guerrero's one home run in the first swing-off and had two chances to force a fourth tiebreaker but didn't homer on either.

Guerrero laughed as they embraced at home plate following Pederson's final swing. Even if he wouldn't go on to win, he had won by surviving.

"That was elite hitting," Alonso said. "That was some of the best rounds of BP I've ever watched. That was up there with -- I think that was even better than the Josh Hamilton round because both of them going back and forth, and clawing back the way that Joc did, he had his work cut out for him. ... I don't know if we're ever going to see that again. That was special."

Guerrero tried to summon that magic in the final round. Whereas Schneider previously fed him pitches over the heart of the plate, in the final round Guerrero asked him to leave the ball slightly inside so he could cheat to his pull side. Schneider tried to elevate pitches to keep Guerrero from needing to use his tiring legs.

"Kind of did it on adrenaline, I think," Schneider said. "His last round was better than my last round, to be honest. After that second round, it was so mentally and physically exhausting, and he still put up 22, which not many people did that at all."

It more than validated Major League Baseball's choice to invite Guerrero, who entered the season as the most well-regarded hitting prospect in years. Now he has an indelible moment to attach to his name and pedigree, which is the very sort of thing the Derby should serve to do.

"My 15-year-old was all for it," New York Yankees pitcher CC Sabathia said. "Even my girls. They're really not that into baseball, and they were into the Derby."

How couldn't they be? Vlad Jr. vs. expectations in the first round was a resounding KO. Vlad Jr. vs. Joc in the second round turned an exhibition that runs the risk of redundancy into grand theater. Vlad Jr. vs. Alonso was two rookies playing for a prize nearly twice their $555,000 salaries. However high the expectations, the 2019 Derby exceeded them.

Schneider knows. Earlier this week, his wife filled out a Derby bracket and picked Vlad Jr. She asked Schneider how many to choose. Bryce Harper won the previous year with 45, so, Schneider said, probably 55.

He chortled. How quaint. How nave. He's a coach on the Blue Jays' staff. He knows Guerrero's power. He should've seen something like this coming.

Then again, come on. This was the sort of night even dreamers can't imagine. Home runs upon home runs, miles and miles of them, from a kid with a cherubic face and blond-dyed dreadlocks and a charming smile, and the captured hearts of everyone who saw Vladimir Guerrero Jr. do what he did Monday and couldn't help themselves when they said, "Oh my God." 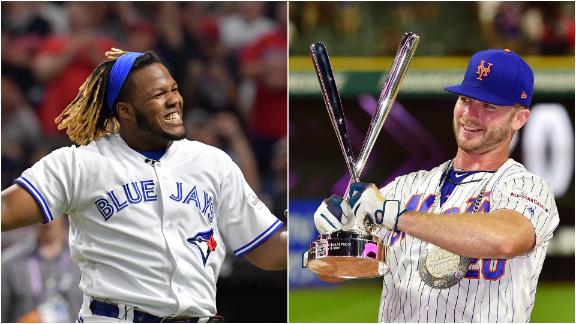 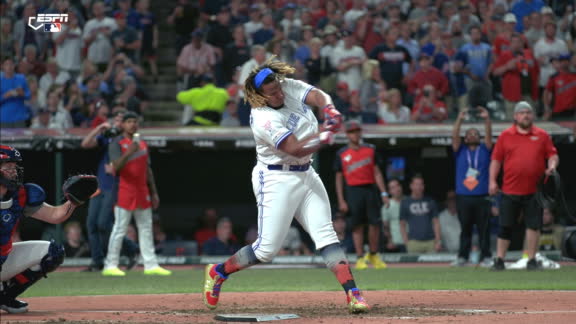 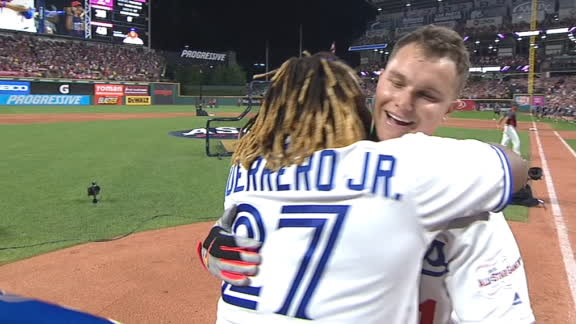