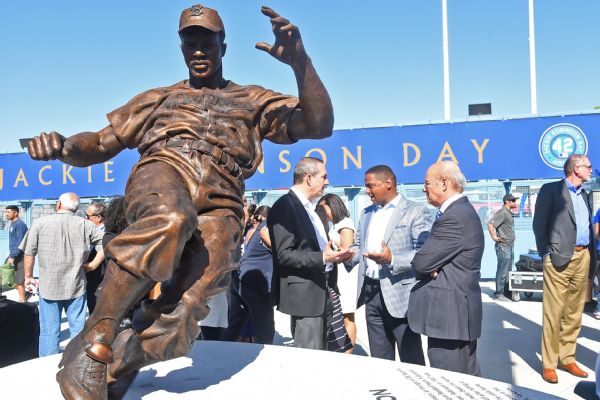 ESPN
By Doug Padilla
LOS ANGELES -- Everything was perfectly placed Saturday, when it came to the Jackie Robinson statue the Los Angeles Dodgers unveiled at Dodger Stadium.

Presented on Jackie Robinson Day, the bronze sculpture with a granite base honored the trailblazing athlete and humanitarian who broke the color barrier exactly 70 years prior. But the symbolism only started there.

Robinson's journey was long and often arduous, so the sculpture depicts him at the outset of his career, when his road to helping diversity began. That he is frozen in time stealing home is no accident, either, as the action reflects both bravery and an aggressive nature, two traits that helped Robinson on his historic path.

Having the statue on the reserve level on the third-base side was a prerequisite because that is the most trafficked entry at Dodger Stadium, and that gives as many fans as possible the chance to see it.

The Robinson statue is the first in what president and CEO Stan Kasten plans to be a series of sculptures honoring Dodgers greats. His decision to start the project with Robinson was a simple one.

"Every advancement in society has come from people standing on the shoulders of giants," Kasten told a crowd of baseball dignitaries and Robinson family members at the statue's unveiling. "In the history of baseball, in the history of our country, few people have stood taller than Jackie Robinson. Jackie stood for excellence on the field, he stood for excellence off the field, but mostly he stood for the proposition that all human beings deserve their dignity, respect and fair treatment at all times."

Others to take the dais at the ceremony included longtime and recently retired broadcaster Vin Scully, baseball icon Frank Robinson and NBA legend and Dodgers part owner Magic Johnson. Also on hand was Robinson's widow, Rachel, 94, as well as two of the couple's children, Sharon and David. Dodgers greats such as Sandy Koufax, Steve Garvey, Tommy Lasorda, Fernando Valenzuela and Orel Hershiser were present as well.

Scully told a longtime favorite yarn of an offseason promotional event in New York when he was a young broadcaster and Robinson was one of the Dodgers' top players. Scully and Robinson were to both ice skate, and Robinson challenged Scully to a race, even though he had never laced up skates. Scully's message in telling the story was to challenge yourself even in the face of the unknown.

He then told a second tale, one that had a direct connection to every game played in the major leagues on Saturday, when all players wore the No. 42. In 1950, Robinson received a specific death threat for a Sunday game in Cincinnati. The mood before the game was somber until one player spoke up.

"The Dodgers had a young left fielder by the name of Gene Hermanski, and Gene was colorful, bright, blond, white and full of you-know-what," Scully said. "And in this quiet atmosphere in the clubhouse, Gene suddenly says, 'I've got it!' He said, 'We'll all wear No. 42, and they'll never know which one is Jackie Robinson.'"

That game was played without incident, and the only player to wear No. 42 that day was Robinson. On Saturday, however, everybody wore Robinson's number.

While a number of Robinson statues exist around the country, including at UCLA and in Pasadena, where he was raised, none had been commissioned by the Dodgers until now. The one revealed Saturday was sculpted by Oakland-based artist Branly Cadet, who pained over the details.

"I think in order to achieve a likeness of someone, you have to be hypercritical," Cadet said. "Fortunately, I have the family to bounce the images off of."

Despite the statue's rising 77 inches and weighing 700 pounds, the likeness of Robinson is striking in its accuracy. The uniform is rumpled in harmony with Robinson's actions, and the details even include Robinson's shoe bent backward as it drags along the dirt at the beginning of his slide.

On the 34,000-pound granite base that rises 30 inches, three famous Robinson quotes are inscribed:

"A life is not important except the impact it has on other lives."

"I'm not concerned with your liking or disliking me ... All I ask is that you respect me as a human being."

"There is not an American in this country free until every one of us is free."

Robinson's playing days ended in 1956, and he died in 1972, but the Dodger Stadium statue will be a constant reminder of what he accomplished, both on and, especially, off the field.

"It is our hope that the statue will be a reminder to kids and adults that life is a glorious challenge filled with stolen bases and strikeouts," Sharon Robinson said. "And that it will inspire each of us to fight back against injustice, build strong communities, take risks and embrace the beautiful diversity that is this great nation." 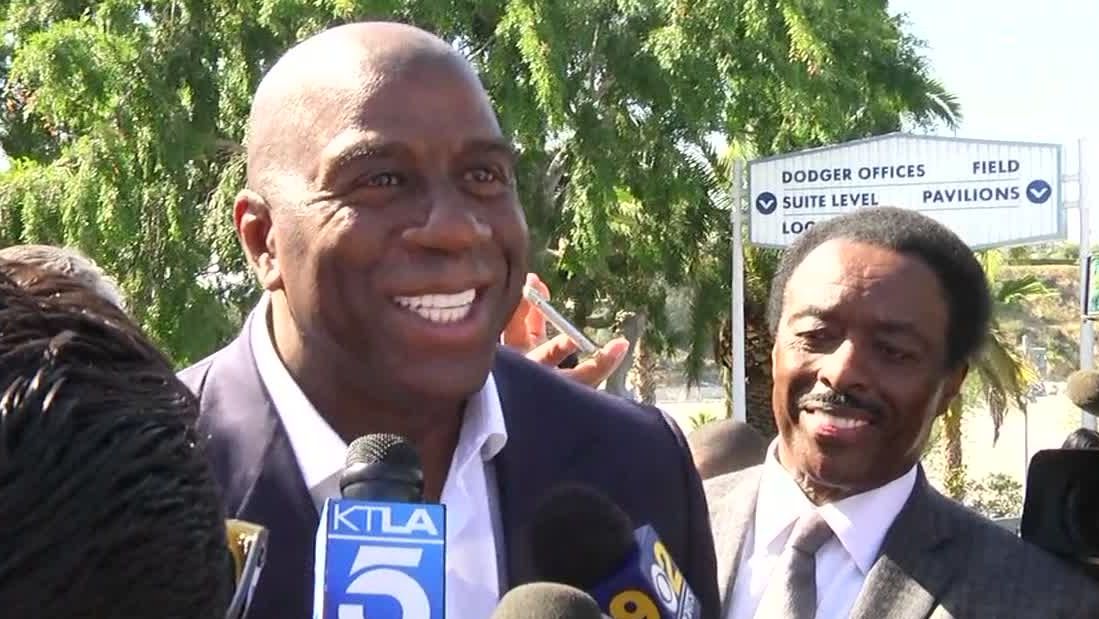