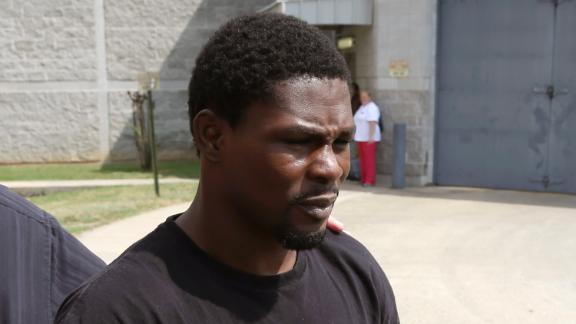 A woman said Tuesday that Jermain Taylor threatened to fatally shoot her 5-, 3-, and 1-year-old children, and that she knocked the gun away after the cursing middleweight boxing champion put the weapon to her husband's head in Little Rock, Arkansas, on Monday.

Toya Smith, 40, told The Associated Press that she and her family were having a good time at the city's Martin Luther King Jr. Day parade Monday when Taylor produced his boxing belt and asked to get a photo with her son. Smith says her family had never met Taylor before and that it appeared he had been drinking.

She said Taylor -- who already faces charges in an August shooting in Maumelle, Arkansas -- produced a gun and fired two shots into the air and threatened to kill her husband.

"He put [the gun] up against his temple, I jumped in front of it and it went off up into the air," injuring her husband's ear, Smith told the AP. "He was going to shoot him, but I saw it, he was going to kill him and I had to hit the gun."

A Little Rock police report says Taylor was arrested without incident and a gun was recovered. He is charged with five felony counts of aggravated assault, three felony counts of endangering the welfare of a minor and a misdemeanor count of drug possession after he was found to have a small bag of marijuana.

Taylor was released Tuesday from the Pulaski County jail on $50,000 bond. His attorneys did not return phone calls to The Associated Press on Tuesday.

In addition, Taylor's title defense against Sergio Mora, which was scheduled to headline the Feb. 6 edition of ESPN2's "Friday Night Fights" at the Beau Rivage Resort & Casino in Biloxi, Mississippi, is off and unlikely to be rescheduled. His promoter, Lou DiBella, said Taylor suffered a broken rib in a sparring session a few days ago. DiBella said they had hoped to keep the fight together but that X-rays showed a fracture.

"We learned a few days ago that Jermain suffered a rib injury in sparring, and we were getting another opinion and seeing how Jermain felt, and then this incident happened," DiBella told ESPN.com's Dan Rafael on Monday. "His fight on Feb. 6 was going to be canceled due to a legitimate injury, a rib fracture, but this obviously is a shocking development no matter what the exact details are, and it leads myself and his management [Al Haymon] to be more concerned with his well being, his mental health and his future than his boxing career.

"Right now there aren't any plans to reschedule anything or think about his future in the ring until the events surrounding his legal issues are dealt with."

Smith told the AP that she and her family tried to get into their car and leave, but Taylor continued pointing the gun toward the vehicle.

"He was pointing at the kids, so I jumped in front of him again and said, 'Please don't shoot my kids,'" Smith said.

She said Taylor cursed, saying that he didn't care about the children or her and that he was going to kill her husband.

Smith said her son and two daughters were unable to sleep and cried most of the night.

Taylor already was facing significant legal issues stemming from an incident in his home on Aug. 26, when he allegedly shot his cousin Tyrone DaWayne Hinton multiple times and fired a gun at (but missed) another person during an altercation.

The 36-year-old Taylor (33-4-1, 20 KOs) was charged with first-degree battery and first-degree terroristic threatening, and faces up to 26 years in prison if convicted. He pleaded not guilty in December and is supposed to go to trial in June.

Hinton survived, and Taylor, out on bail, received permission from the court to travel to Florida to train for an Oct. 8 fight against titleholder Sam Soliman, whom he won a unanimous decision against to reclaim a belt he had held in 2005, when he outpointed Bernard Hopkins to win the undisputed 160-pound world championship.

Taylor was training in Little Rock for his first defense, which was to come against former junior middleweight titlist Mora in a fight that originally was supposed to take place in 2007, when Taylor was still undisputed champion. However, Mora passed on the fight because he was unhappy with the deal, a decision he has long regretted.

"Do I have bad luck, or do I have bad luck? I am getting so used to this," Mora told ESPN.com about having his title shot canceled. "If I didn't have Lou and [adviser] Al Haymon scrambling for me to get another opponent, I would be panicking. But I'm in a good place. I have a good team, and they are going to take care of things."

Mora said DiBella told him Saturday that Taylor had suffered a rib injury but that he was unsure whether the fight would be called off because Taylor was receiving treatment and getting a second opinion.

"But I felt the bad news coming even before what happened [Monday]," Mora said. "I was training my ass off, but this is not the first time this has happened. I'm gonna keep training like I am fighting on Feb. 6 and headlining a card on ESPN2."

The fight with Mora was supposed to be Taylor's sixth since coming back in December 2011 amid the controversy of being relicensed following a 26-month layoff after he suffered a brain bleed in a brutal 12th-round knockout loss to Arthur Abraham in Berlin in the opening stage of the Super Six World Boxing Classic in October 2009.

After Taylor decided to fight again, he passed a battery of neurological tests administered by some of the world's top doctors from the Mayo Clinic to the Cleveland Clinic.

With all of his tests normal and medical professionals saying he was at no greater risk of injury than any other fighter, the Nevada State Athletic Commission -- which has some of the most rigorous licensing standards in boxing -- gave him a license.

Dan Rafael of ESPN.com and The Associated Press contributed to this report.