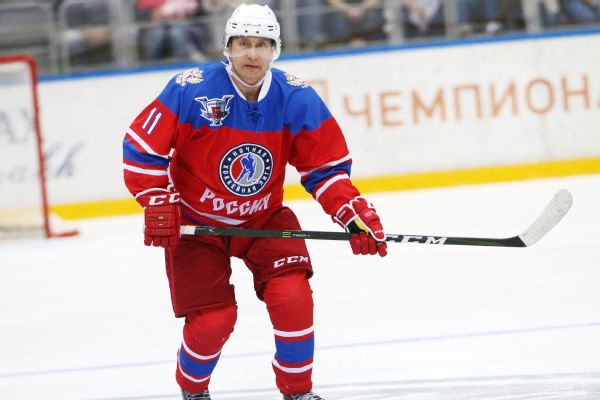 A group of former Philadelphia Flyers are heading to Russia for a series of exhibition games this month, and they may face Vladimir Putin.

Joe Watson, a Flyers defenseman from the 1970s who has helped organize the event, told the Camden (New Jersey) Courier-Post that the Russian president wants to play.

Putin has been a source of consternation in the United States of late, with President Donald Trump praising the leader despite the American intelligence community insisting that Russia played a major role in hacking the U.S. election in November.

"I don't know about that," Watson said, according to the newspaper. "He'll have to earn it from us as far as we're concerned. We may be stuck in Siberia, but what the hell? We'll have a good time.

"They never release Putin's schedule until 24 hours before because of security reasons, so Putin, if he's around, he wants to play the game against us."

Putin, 64, has suited up with former NHL players before. A couple of years ago, he played in an exhibition and scored eight goals -- a few coming on assists from former NHL starsPavel Bure and Valeri Kamensky.

The alumni game has its own history of controversy. The Flyers are popular in Russia based on a series of games in the 1970s. The Soviet Union's Red Army team, one of the world's dominant clubs for years, played a series of exhibitions against NHL teams in 1976 and even tied the mighty Montreal Canadiens. They were unbeaten on the tour heading into Philadelphia.

It was a different story against the defending NHL champion Flyers. In a very physical game,the Flyers' Ed Van Impe checked Red Army star Valeri Kharlamov so hard he remained on the ice for a minute. No penalty was called, which incensed Red Army coach Konstantin Loktev. He pulled his players off the ice, only returning after Flyers chairman Ed Snider threatened not to pay the Red Army for playing.

The Flyers eventually won the game 4-1. Watson is the only former Flyer on this tour to have played in that game. Others taking part are Brad Marsh, Terry Carkner, Jeff Chychrun, Shjon Podein, Lindsay Carson and Al Secord, according to Philly.com.

Many former Flyers alumni are skipping the event, however.

"Oh, I think it had to do with politics," Watson said, according to the Courier-Post. "Some of our guys said, 'They've got bad gas in their planes and their engines go down.' I said, 'Well, I never thought of that before,' but we're flying Aeroflot directly from Kennedy to Moscow, so I think we'll be fine."