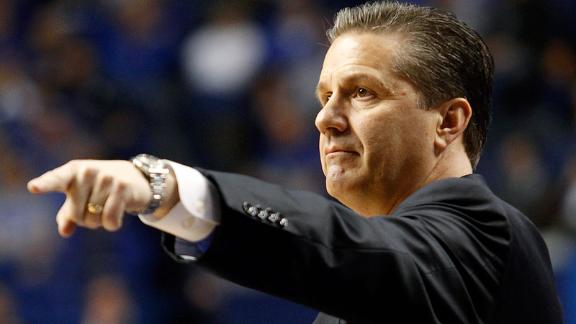 John Calipari, who is often linked to NBA coaching jobs and who has been critical of the NCAA for not changing with the times, told ESPN on Tuesday that he is more motivated by helping his players at Kentucky than he would be by building the value of an NBA franchise.

But the former coach of the New Jersey Nets also believes that he would be a better NBA coach the second time around.

"I think I would be [better than my previous NBA stint] if I did it, but that's not the point for me," Calipari said on ESPN's "Numbers Never Lie" on Tuesday. "Can I say this in a humble way -- I don't need the money. If I stop coaching today at Kentucky, my toes are up and I'm eating Cheetos and I'm fine.

"But here's my point: What's happening for me, what I'm feeling about coaching, goes beyond wins, goes beyond building a franchise. Can I do that in the NBA? If there was some place that I felt that it would be more than just coaching and trying to win ... I'm not there to help you build your franchise value or help sell tickets. That doesn't move me. What moves me now is what I'm doing and how I'm helping families."

Calipari's Wildcats lost in the NCAA final to Connecticut on April 7. Prior to the game, word spread that Calipari would be the coach of the Los Angeles Lakers next season, rumors he quickly denied.

He also has been outspoken regarding the NCAA, its policies and its future.

Calipari, whose Final Four appearances with Massachusetts (1996) and Memphis (2008) were vacated due to NCAA violations, has said he's offered numerous ideas as to how to reform the college experience from the athlete's standpoint, but he says his suggestions have fallen on deaf ears.

"I think we could have gotten somewhere with me as the point man, but the NCAA was not interested in my help," Calipari writes in his book "Players First: Coaching from the Inside Out." "The message I got, between the lines, was, 'No, not you. Not Calipari. We don't want him involved.'"