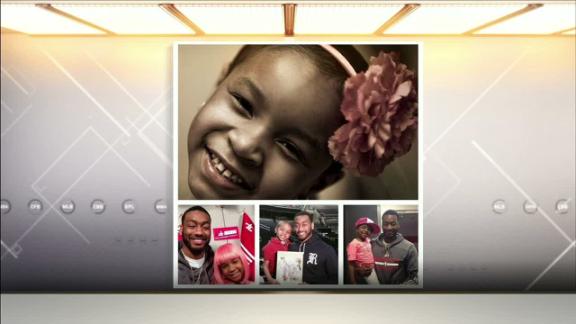 Washington Wizards guard John Wall broke down in tears during an emotional postgame interview as he talked about Miyah Telemaque-Nelson, the 6-year-old girl Wall had befriended who died of cancer Monday morning.

According to CSN Washington, Wall had been writing the little girl's name on his shoes all season and had communicated with her as recently as two weeks ago via FaceTime, the team said.

"This game was really meant for her. It would've been an even tougher day to lose it," said Wall, who received the news of her death via text message. "I just went into a mode where I didn't want to lose this game."

"Yeah, it was a tough day for him," coach Randy Wittman said. "I thought he handled it well, but he was hurting at the end."

A moment of silence for Telemaque-Nelson was held before Monday's game against the Boston Celtics, and Wall played with "RIP Miyah" written on his sneakers. His inspired 26-point, 17-assist effort helped the Wizards to a double-overtime win.

Wall took to Twitter after the game to pay tribute to Telemaque-Nelson:

Wall Pays Emotional Tribute To Young Friend
John Wall talks about his young friend Miyah Telemaque-Nelson, who died of cancer Monday morning, and how she influenced Wall and touched his heart.