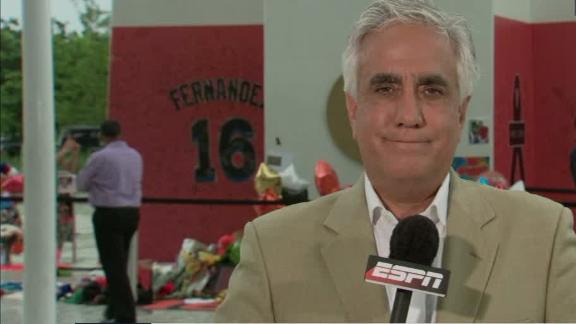 They called it "José Day" every time he took the mound at Marlins Park, every time he graced that place with his ability and exuberance.


Outside the ballpark on Monday, near one of the support columns from the stadium's retractable roof, a shrine swelled, filling with posters, jerseys, candles and tears from a fan base that was still getting to know its young superstar. In the stands later that night, after an emotional game that was numbingly played, they chanted:

José Fernández's death still doesn't feel real, even more than 48 hours later. He seemed too full of life, too unaffected by the troubles that plague the rest of us, to leave this world so suddenly. His loss -- in a boating accident off Miami Beach just after 3 a.m. ET on Sunday morning -- is one from which Major League Baseball will take a while to recover.

But for Miami, it's personal.

To Miami, José Fernández wasn't just talented, wasn't just young, wasn't just magnetic. He was theirs. A city with a large Cuban-American population identified with Fernandez in a way few regions ever connect with millionaire athletes. His story was their story. He symbolized their struggle and emerged as a beacon for what it could become.

Four years after the franchise was born in 1993, Miami had come to embrace the Marlins by 1997. It was because they were winning, sure. But it was also because at the center of it all was a young Cuban named Liván Hernández, with an electric fastball, a knee-buckling curve and a familiar story. He led that team to an improbable World Series championship against the Cleveland Indians and proudly proclaimed, "I love you, Miami!" Then the good feelings were taken away.

Then-owner Wayne Huizenga dismantled that team, turning it into a 54-108 laughingstock the very next season. Jeffrey Loria came later and quickly became one of the most distrusted figures in the city. He took apart another championship team from 2003, cried poor to get the taxpayers to fund a new stadium, promised to invest in the roster when the deal was approved, then backloaded the contracts and sold off the expensive players four months into it all.

The people of Miami truly love baseball, but their distrust in ownership is very real. They had been let down too many times to fully commit again.

But José Fernández transcended all that, because his journey hit home to so many.

My parents spent three days stranded on a beach when they tried to defect from Cuba, with hardly any food or any water. This was 1980, part of the infamous Mariel boatlift. My brother was 4. They risked their lives, left everything they ever knew behind, came to Miami with nothing but the clothes on their backs, and methodically built a life so that their children wouldn't grow up so restricted and so impoverished.

I saw my parents in José Fernández.

He was jailed as a teenager because his first three attempts at escape did not work. On his fourth, he saved his mother from drowning, somehow made it to Mexico and ultimately arrived in Tampa.

In an interview with Dan Le Batard, Fernández laughed about how he couldn't operate the touchless faucets in the bathroom. He told stories about being confused by the concept of free refills and all-you-can-eat buffets. And he spoke solemnly about how afraid he was when he first arrived in this country, because he didn't speak English and didn't know what everyone was laughing about all the time.

There is an entire population in Miami that connects with all that.

He was Liván Hernández, only better, more engaging and bilingual. Giancarlo Stanton has the power and the fame and the contract, but José Fernández was the man this city -- this ownership group -- had been longing for.

And he was only just getting started. 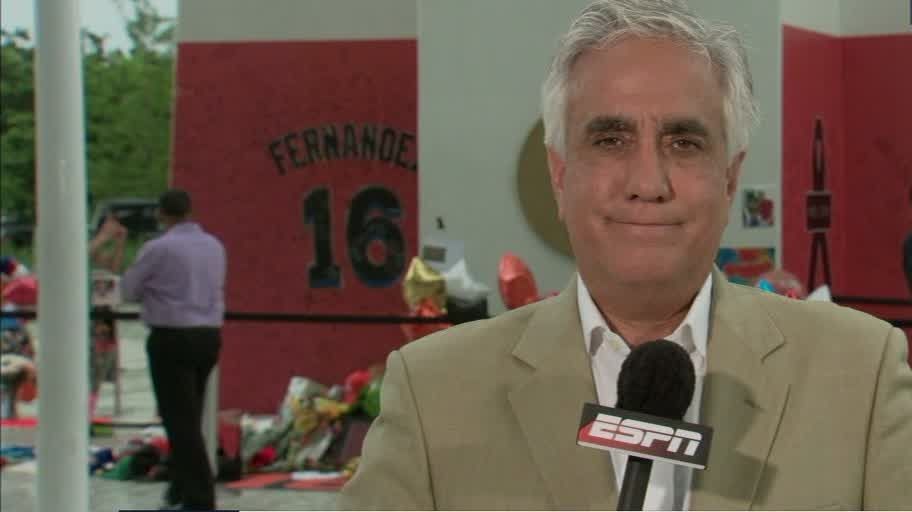 Marlins' emotional tribute to Jose Fernandez
One day after the death of 24-year-old pitcher Jose Fernandez, the Marlins were back on the field to face the Mets. ESPN's Pedro Gomez joins OTL from Miami with a look at the tribute and the tears as the Marlins and all of baseball said goodbye.
Related topics:
sportsespnmiamimlbmiami marlinsmarlinsjose fernandezcuban refugeescuba
Copyright © 2021 ESPN Internet Ventures. All rights reserved.
More Videos
From CNN Newsource affiliates
TOP STORIES