Jose Fernandez's 'infectious way' on, off field remembered at funeral 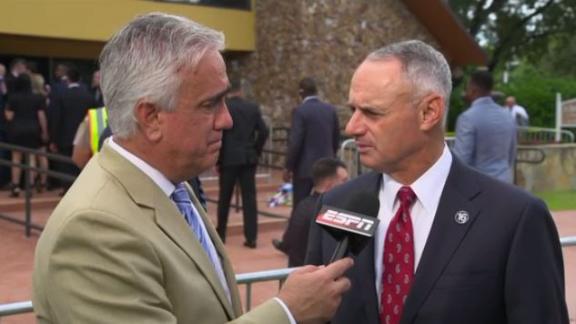 Fernandez, 24, and two friends were killed in a boat crash off South Beach early Sunday.

"I think the most important thing is that he brought this community together around our game in a way that we haven't seen with an individual player in a very long time,"MLB commissioner Rob Manfred told ESPN's Pedro Gomez outside the Mass.

"Obviously, this is a tremendous loss for Jose's family, for the Marlins organization, but really for all of baseball. He was that important to the game. He had an infectious way about him ... the way he played the game on the field, and I think people found that enthusiasm to be just really appealing."

"It's very difficult to understand this," the Rev. Jose Alvarez said. "Why so young -- someone with such bright promise?"

The bilingual service lasted more than two hours, and much of the time was spent celebrating Fernandez's dynamic personality, rather than his exploits as the Marlins' precocious ace.

The bulletin for the Mass included three photos of Fernandez, and each captured his familiar grin.

"His magnetic smile could light up a ballpark," Loria said. "He set the standard for making baseball fun."

Pallbearers wore black Fernandez jerseys as they carried his casket, while Marlins manager Don Mattingly and third baseman Martin Prado read Scripture. The team has grieved in public and offered moving tributes to Fernandez while finishing out the final six games of the season, which ends Sunday.

During the passing of the peace, players lined up to hug and console Fernandez's mother and grandmother, seated in the front row. He also left behind a girlfriend, who is pregnant with their child.

"He was a young man who was larger than life -- a good, kind-hearted, loving young man who loved life, who loved people," Alvarez said in his homily. "He was a guy of enormous dimensions. Jose was too good for this league. He's going to a higher league."

Alvarez said Fernandez is already at work in heaven, noting the improbable homer hit by 170-pound Dee Gordon leading off the first inning of the Marlins' emotional first game after the boat crash.

"A skinny little guy like that is not supposed to hit the ball that far," Alvarez said. "Jose is busy, I guarantee you. Jose is still pitching. ... Jose, we'll never forget you. We ask that you never forget us."

Fernandez and his mother defected from Cuba by boat on his fourth try when he was 15. He broke into the majors with Miami in 2013 and quickly became a local celebrity, thanks to his rare combination of charisma and talent, along with a backstory that resonated in South Florida's Cuban community.

Fernandez was the 2013 NL Rookie of the Year and a two-time All-Star, but his proudest moment came when he bought his mother a house, said his agent, Scott Boras.

"He was crying," said Boras, crying himself. "He said, 'Can you believe it?! I bought my mother a home in the United States!'"

Boras also recalled a conversation with Fernandez after he had reconstructive elbow surgery, which sidelined him for 14 months in 2014-15.

"His first words in the recovery room to me were, 'You wait. I'm going to be the best there is,'" Boras recalled.

The hard-throwing right-hander went 38-17 in 76 starts over four major league seasons, but glittering statistics weren't the reason Loria said Fernandez will never be replaced or forgotten.

"I prefer not to think of this tragedy as the end of his life," Loria said, "but rather as the beginning of the legend."

After the service, Marlins players were set to fly to Washington, D.C., to play the Nationals in their final series of the 2016 season.

On Wednesday, Loria, Mattingly, hitting coach Barry Bonds and players including Ozunaand Giancarlo Stanton wore white T-shirts emblazoned with Fernandez's image and the letters "RIP" as they slowly walked the hearse away from Marlins Park in Miami's Little Havana neighborhood. Many in the crowd of about 1,000 chanted "Jose! Jose!" and some waved Cuban flags in honor of Fernandez's heritage.

Hundreds of fans streamed into St. Brendan's Catholic Church later Wednesday for a public viewing, which was scheduled to last into the night. Many said they felt compelled to come, not only because of Fernandez's popularity as a player, but also because he was a hero to many in the Cuban-American community.

Inside the church, mourners filed past a closed casket framed by flower arrangements in the shapes of the U.S. and Cuban flags, with a large family photo of Fernandez off to one side. Many touched the casket lightly and crossed themselves.

The cause of the crash is being investigated by the Florida Fish and Wildlife Conservation Commission. In addition to Fernandez, Emilio Jesus Macias, 27, and Eduardo Rivero, 25, also died in the crash.

On Thursday, officials in Tampa said that a jersey worn by Fernandez in high school was missing after a candlelight vigil at his former high school. Officials at Alonso High School filed a police report, and authorities are asking whoever took the jersey to return it. 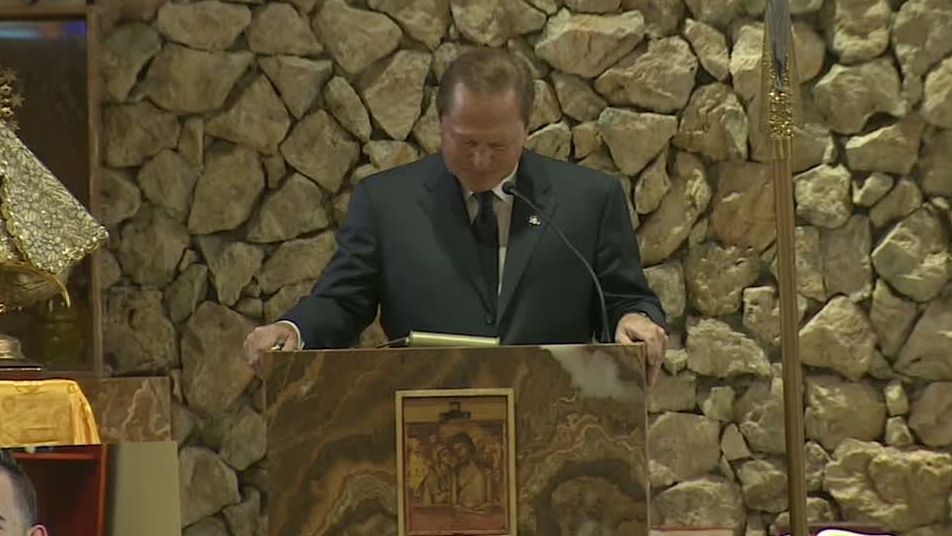 Scott Boras reflects on Fernandez's life
Jose Fernandez's agent, Scott Boras, recalls Fernandez's proudest moments while speaking at his funeral, when he bought his mom a house, became a US citizen and when he found out he was going to be a father.

Jose Fernandez a loss for baseball as a whole
MLB commissioner Rob Manfred talks to Pedro Gomez about the loss of Jose Fernandez and the gap left in baseball and the community with his passing.
Related topics:
sportsespnmlbmiami marlinsfuneraljose fernandez
Copyright © 2021 ESPN Internet Ventures. All rights reserved.
More Videos
From CNN Newsource affiliates
TOP STORIES