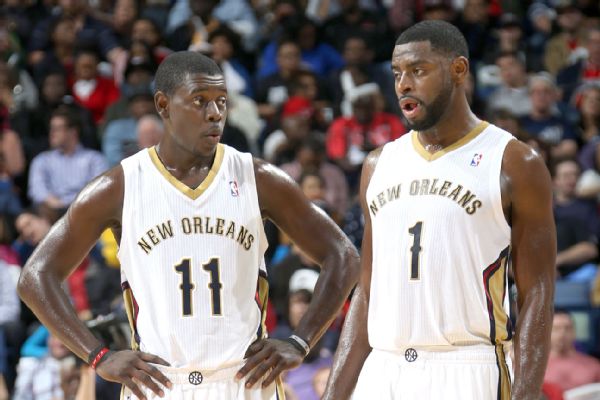 METAIRE, La. -- Reinforcements are on the horizon for the New Orleans Pelicans.

Jrue Holiday will return to practice Thursday and play in his first game of the season Friday against the Portland Trail Blazers. The veteran point guard is expected to arrive in New Orleans on Tuesday and will not make the trip to Orlando for the matchup Wednesday with the Orlando Magic.

Holiday, 26, has been away from the team the whole season in order to tend to his wife , USWNT soccer star Lauren Holiday, who is recovering from the birth of the couple's first child and surgery to remove a benign tumor from the right side of her brain.

"We love the Holidays," Pelicans general manager Dell Demps said. "Lauren and Jrue, and JT is their daughter -- everybody can't wait to meet her. He's just a great person.

"Just bringing him back and getting him back with the group, from a social standpoint, [is] first. From a basketball standpoint, we don't want to put pressure on him and make him feel like he's the savior. [It's] going to be a transition for him coming back, getting all the kinks out. But we hope to expedite that transition."

Tyreke Evans also returned to non-contact activity at practice Tuesday after missing the past nine months in recovery from a third right knee procedure in the span of nine months.

"It's just good news for them both coming back," Pelicans star Anthony Davis said. "It's good for us that two key components to our team that we're able to get back really soon. It's good for everybody. We'll try to get this thing going."

Demps said Evans is in "great shape," but there is no timetable for his return to game action.

"It will all be based on how his rehab goes in the next days, week," he said.

Demps said Holiday, who was limited to a combined 74 games in his first two seasons in New Orleans because of right leg injuries, is "100 percent healthy" and has maintained his conditioning with the help of a Pelicans assistant and a strength and conditioning coach.

The last-place Pelicans (2-9) expect a gradual return for Holiday as he acclimates to an NBA schedule.

Pelicans coach Alvin Gentry said Holiday's role, including whether or not he will start immediately, has not yet been determined.

"I just know we won't play him 35 minutes the first game back," Gentry said. "We're not going to do anything like that. I think we've got to be smart about it. He's been working out twice a day. He's in great shape. There's a big difference in being in great shape and being in basketball shape. We just have to make sure he gets to basketball shape."

"Jrue is very good offensively and very good defensively," Davis said. "He's going to bring that passion, that energy, that fight. It's going to be good to have him back on the floor for us, to have Jrue being Jrue. It will probably take him a couple games to get back [to his old self], but as long as he's on the floor."