J.T. Brown on leaving Tampa Bay, whether he'll protest again and why the West is more physical 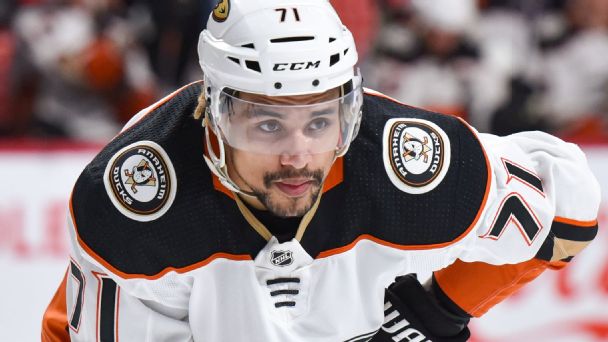 Many fans know J.T. Brown as the lone NHL player to protest during the national anthem this season. The Minnesota native raised his fist during the anthem for one game in October to bring awareness to police brutality and racial injustice. He then announced he would no longer demonstrate, instead focusing more efforts on the community in Tampa, including building a relationship with the police department.

On the ice, the 27-year-old winger has had an equally eventful season. The Tampa Bay Lightning put Brown on waivers in mid-January, where he was scooped up by the Anaheim Ducks. Off the ice, he's a husband, a first-time father, a volunteer and a video gamer who interacts with fans by live streaming his couch sessions. (Regarding his reputation as the league's pre-eminent gamer, Brown says: "I don't mind it; that's a huge passion for myself.")

Last week, before the Ducks played in Chicago during a four-game road trip, Brown sat down with ESPN to delve into a variety of topics, including whether he would ever protest again.

On being put on waivers:

That's the hard part, especially with a family: You have that 24-hour period where you don't know [what's going to happen]. You're just waiting. Are we going to New York, in Syracuse [to the Lightning's AHL affiliate, the Crunch]? Are we going across the country? We were playing the waiting game. So that's a little bit difficult, especially with a wife, a young baby and two dogs. That makes the planning part a little bit hard. I feel like if you're on your own, it might be a little bit easier. Or if it's not the first time, you kind of know what to expect.

On getting settled in Anaheim:

It took about 10 days or so. Lexi was on it right away. As soon as we found out we were going to Anaheim, she was online looking for places trying to get everything set up.

On staying in touch with the Lightning:

I definitely keep in touch with them and want to see how they're doing. I still text those guys every now and then, to see how the games are going, see how they're playing. They're in a different conference, so it's easy to wish them as much success until the playoffs come, and then we'll see it goes from there. Obviously, I wish them all success. I have no ill will toward anybody there.

On differences playing in the Western Conference:

I definitely notice a few differences from when I was in the East. Physicality is probably one of them. I feel like the Western Conference plays with a little more grit, and the Eastern Conference tries to be up-tempo, fast. I like playing either way.

The travel has been interesting. I think the time zones are a little difference, going from West to East, then coming back. That's probably the hardest thing. Those three hours don't seem like much, but then when you start getting into games and trying to get a routine back, it's hard when you have that time difference.

On joining a new team in midseason:

In hockey, in general, I feel like everyone's nice. You know somebody who knows somebody on a different team or are friends with somebody. Everybody was good, showed me the ropes, and any questions I had, they were willing to answer.

On establishing new roots, without forgetting the old ones:

It's kind of a hard situation. You obviously want to be part of your new community, as well, but you also don't want to forget what you've put in and what you've done for so long to the first community. I won't ever forget Tampa, and hopefully they won't forget me, as well.

On his work with the police department in Tampa:

I created a friend in the police chief. It was awesome to be able to create that kind of friendship, as well as to see his line of work. When I was on waivers, he was the first one to text me: "If your wife ever needs anything, give her my number. If she ever needs anything while she's still here, tell her to call me."

During a heightened-alert time in the area, when there was a serial killer in Tampa and people weren't able to go out, when these murders were taking place, we were able to see firsthand what [the police] were going through, able to relate to them, and able to have a normal conversation, kind of like we're having. Not necessarily have it be about the protest or what else was going on, but just to chat.

On whether he would protest again:

On threats his family has received:

You still get some negative things every now and then. I think you don't get to where were are now without some negativity. Obviously, a lot of it is on the internet, and you don't know who is sending it. You don't know if it's legitimate or they're 10-year-olds just tweeting things out or saying things on the internet. So you try to take it with a grain of salt, but obviously threats on someone's life are a little bit different. If you do something wrong in a game, and you look at Twitter, you're going to see some negative things.

On whether the NHL is an inclusive league:

I feel like when you go to different teams, they don't care whether you're black, white, you're from Sweden. It doesn't matter where you are. At least from that standpoint, yes, everything is inclusive. Everybody understands that we're all here for the same purpose: to win. So they don't care where you're from, who you are, what's your background, [if] you're religious. Doesn't matter.

On how hockey can become more inclusive:

I think a lot of it is grassroots programs. The hardest thing is that hockey is an expensive sport. It's not something that you can pick up as easily as basketball, football, soccer or even baseball -- where, for the most part, your pads were from the association, everyone gets to play, all you had to do is pay the registration fee. If you want to play basketball, you can go to Walmart or Target, pick up a basketball and go to your local gym.

It's not as easy with hockey -- especially in warmer climates, where they don't have the ice. In Minnesota, yeah, you can get a pair of skates and go on the pond to practice and get better and enjoy the sport more. But ice time is expensive. Equipment is expensive.

Different things that the league and teams are doing and teams -- giving out gear and setting up programs to teach people how to skate at an earlier age -- those are all key things because hockey is such an expensive sport. If you can't get more people and more diverse communities involved, it's going to be hard to grow it.
Report a correction or typo
Related topics:
sportsespnnhlanthempolicejt browntampa bay lightningprotestdemonstrateanaheim ducks
Copyright © 2020 ESPN Internet Ventures. All rights reserved.
More Videos
From CNN Newsource affiliates
TOP STORIES