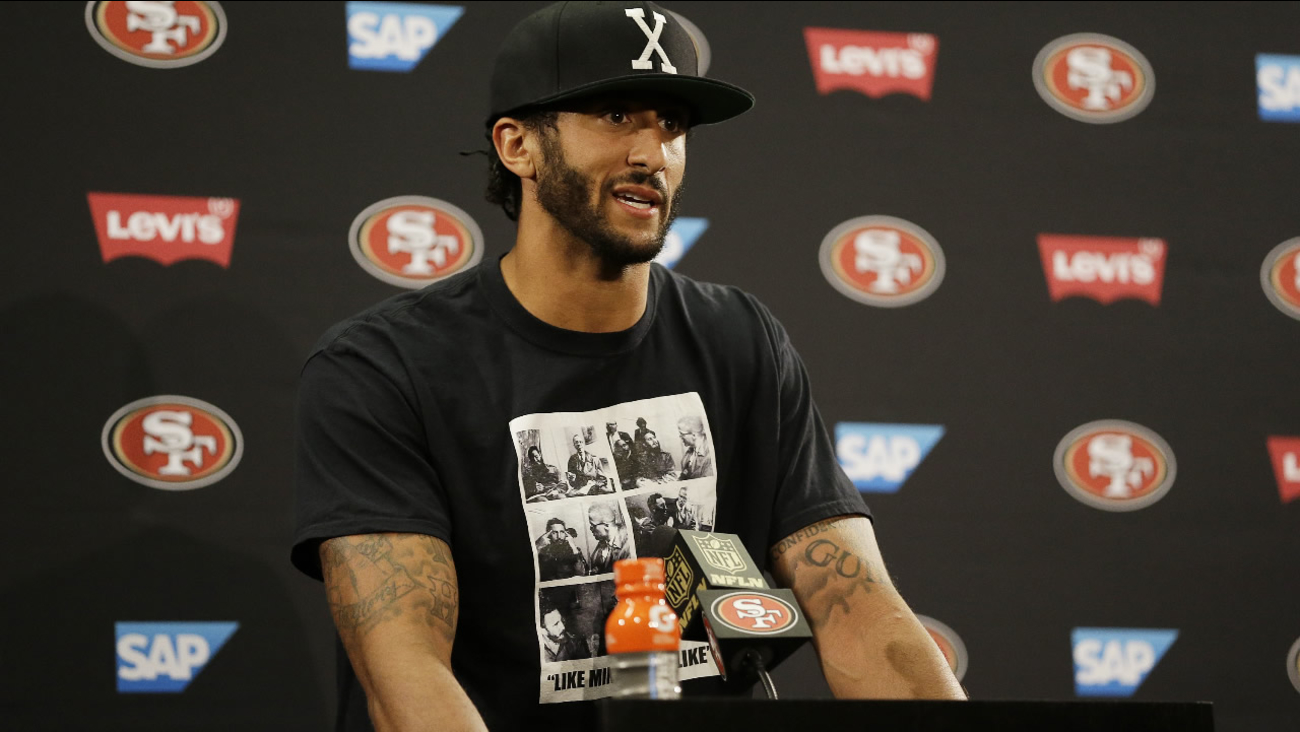 SANTA CLARA, Calif. -- The San Francisco 49ers acknowledged Friday night that quarterback Colin Kaepernick did not stand for the national anthem before Friday's game against the Green Bay Packers.

"I am not going to stand up to show pride in a flag for a country that oppresses Black people and people of color," Kaepernick told NFL Media in an exclusive interview after the game against Green Bay. "To me, this is bigger than football and it would be selfish on my part to look the other way. There are bodies in the street and people getting paid leave and getting away with murder."

Kaepernick has been tweeting extensively about these issues for weeks.

"The national anthem is and always will be a special part of the pre-game ceremony," a team statement said. "It is an opportunity to honor our country and reflect on the great liberties we are afforded as its citizens. In respecting such American principles as freedom of religion and freedom of expression, we recognize the right of an individual to choose to participate, or not, in our celebration of the national anthem."

Pro Football Talk initially reported that Kaepernick did not stand during the national anthem. By taking a stand for civil rights, Kaepernick, 28, joins other athletes, like the NBA's Dwyane Wade, Chris Paul, LeBron James and Carmelo Anthony and several WNBA players in using their platform and status to raise awareness to issues affecting minorities in the U.S., reports NFL Media.

Kaepernick made his preseason debut against the Packers after sitting out the first two exhibition games because of tightness in his right shoulder. He went 2-for-6 for 14 yards and added 18 yards on four carries.

The NFL has responded to the Kaepernick protest in a statement saying in part, "Players are encouraged but not required to stand during playing of national anthem," according to ESPN.

"Players are encouraged but not required to stand during playing of national anthem." - NFL statement on Kaepernick pic.twitter.com/7DVhqzKCEQ

Meanwhile, athletes and sports analysts have responded on social media to Kaepernick's protest:

If you follow Kaepernick on IG, this isn't new news! He's had a not so gentle rage brewing for a very long time. https://t.co/dCtil4SkAL

Texts coming in from coaches, players, front office execs from around league on Kap. So far every player backs him. No coach/exec does.

@swhitfield75 what does him making money have anything to do with it. He standing for what he believes is right. Can't put a price on it

You're an idiot @Kaepernick7

This guy is a joke. Get lost. You don't like it in a country that has given you opportunity to succeed? Then get out https://t.co/Dwssw2I1zA

Not condoning it, but You'll be hard pressed to find an African American that chastises @Kaepernick7 for his actions https://t.co/8VOAVc6ltJ

Easy way to make sure you're NOT the starting QB on opening day. #Sept11 https://t.co/DyQrIOGGO5

Activists changed USA for better but have to associate Nat Anthem w/ military that die for ur right to protest. Stand up. Find another way

The easy thing to do is to make fun of Kap and his play. How about trying to understand where he's coming from....but that would be too hard

Kaep is using his platform & brand to make a compelling & polarizing point, which is his right, even if it's met with ire!#idontagree

Bad decision by @Kaepernick7 but bc of the men/women who died for that flag, he has the liberty to disrespect them #betterwaystogetattention

Absolutely he is. It's a platform to use. They don't play the Natl Anthem during practice https://t.co/J41j40aV6p

I will be STANDING during the National Anthem tonight. Thank you to ALL (Gender,Race,Religion)that put your lives on the line for that flag