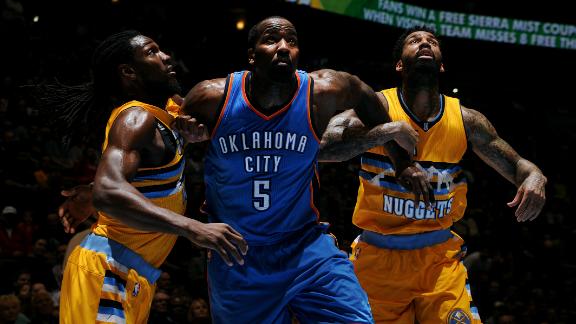 Kendrick Perkins has committed to signing with the Cleveland Cavaliers after he finalized a buyout with the Utah Jazz on Saturday, a source told ESPN.com.

Perkins was traded to the Jazz on Thursday in a three-team deal that sent guard Reggie Jackson to the Detroit Pistons and Enes Kanter, Steve Novak, Kyle Singler and D.J. Augustin to the Oklahoma City Thunder. Perkins did not appear in a game for Utah.

He was recruited directly by LeBron James to pick the Cavs, according to a source. Perkins also drew heavy interest from the Chicago Bulls, Los Angeles Clippers, New Orleans Pelicans and San Antonio Spurs. The combination of a chance to win a championship along with an opportunity for playing time pushed Perkins to choose Cleveland.

James welcomed Perkins to Cleveland via Twitter on Saturday, which Perkins graciously accepted.

After making up his mind, Perkins called Clippers coach Doc Rivers, whom Perkins played for in Boston, to inform his old coach of the decision.

Perkins was not with the Cavs in New York for their game against theKnickson Sunday.

He is expected to report to Cleveland on Monday for a physical and could be in the lineup as soon as Tuesday for the Cavs' road game in Detroit.

The 30-year-old center started 225 games (273 total appearances) for the Thunder after joining the team in 2011 in a trade with the Boston Celtics. A 12-year veteran, Perkins spent his first seven seasons with the Celtics, winning a championship in 2008.

He will be an unrestricted free agent in the summer.

In 51 games (three starts) with the Thunder this season, Perkins averaged 4.0 points and 5.5 rebounds in 19.2 minutes per game.