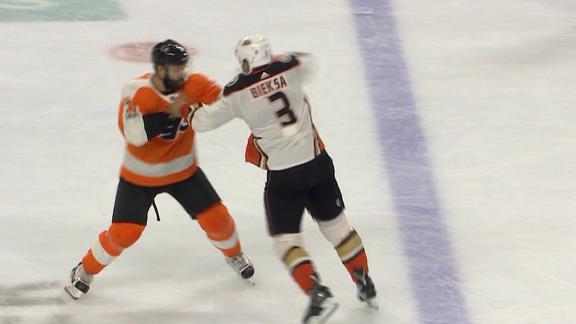 Kevin Bieska of the Anaheim Ducks dropped Philadelphia Flyers defenseman Radko Gudas with what might be the first recorded 'Superman Punch' in NHL history on Tuesday night.

After the two served unsportsmanlike conduct penalties in the first period, they immediately dropped their gloves and engaged. With the Wells Fargo Center ringing a bell to signal the start of their fight, Bieksa lunged forward with his back foot in the air and slugged Gudas on the chin with a leaping right hand, dropping the Flyer with one punch. Both were given fighting majors, even if Gudas' fight consisted mostly of falling.

One can only assume this was Bieksa's solemn tribute to WWE star and 'Superman Punch' purveyor Roman Reigns, who missed the "Tables, Ladders and Chairs" pay-per-view with a viral infection. Godspeed in your recovery, sir.