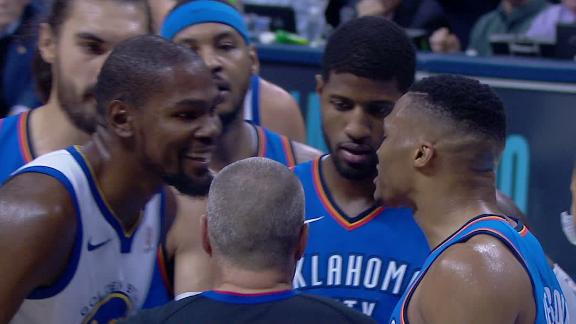 OKLAHOMA CITY - Kevin Durant and his mother, Wanda, believe the hype surrounding Durant and Russell Westbrook has gone too far.

"It's not about me and Russ," the small forward told ESPN after the Golden State Warriors lost to the Oklahoma City Thunder 108-91 on Wednesday. "It's about the Thunder and the Warriors. Myself and Russ are competing out there. That's part of the game. It's basketball. It's not about us. We're just playing the game, and trash talking is part of it. That's all it is."

In his second game playing in Oklahoma City since becoming a member of the Warriors, Durant was showered with boos upon being introduced in the starting lineup, and he was booed every time he touched the ball.

"It's OKC," Wanda Durant said. "It's the same atmosphere that they've always had, so we wouldn't expect anything different. I just think it's too hyped. It's just basketball. Not even as a fan and being here and watching both of them, I really don't get it. But it is what it is."

The two former teammates had a couple of minor altercations during what was one of the most anticipated games of the young season. Late in the second quarter, Westbrook denied a post entry into Durant and the ball sailed out of bounds. Westbrook turned to the Warriors' bench and yelled, "No!" Durant pointed at Westbrook while just smiling.

In the third quarter, tempers flared even more. Westbrook was guarding Durant on the right wing and he almost stole the ball, slapping it out of bounds. The two began jawing at one another and inching closer. Soon, they were forehead to forehead, talking trash.

Durant was seen saying, "You're a p---y." Westbrook responded, "You're soft."

"I'm going to go out and compete every night," Westbrook told ESPN sideline reporter Cassidy Hubbarth after the game. "I'm coming at your neck every single night and I'm just letting him know that."

Durant doesn't have a problem with that.

"That's all part of the game," Durant told ESPN. "It happens. That's it. It should be about the game, not us."

Teammates for eight seasons in Oklahoma City, there still remains some bad blood on both sides since Durant left for the Warriors in the summer of 2016, which makes this matchup so compelling on many levels. Wanda Durant says she would like to see the relationship mended, but doesn't know if or when that will happen.

"I just think it's a lot of unnecessary hype around all of this really," she told ESPN. "It's just a game. It's basketball. So, I don't know. I'll be glad when it's over because it's really unnecessary. It's unfortunate, but it is what it is."

Durant, Westbrook go forehead to forehead
After Russell Westbrook swipes the ball out of Kevin Durant's hands and it goes out of bounds, the former teammates get in each other's faces. 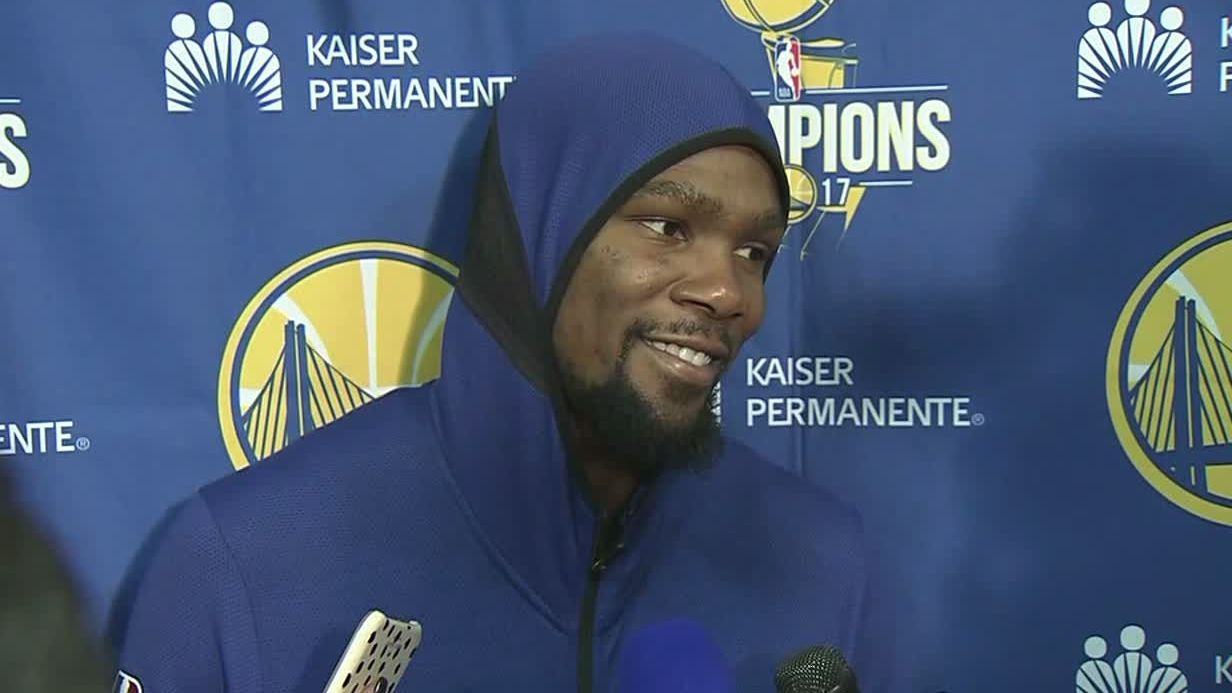