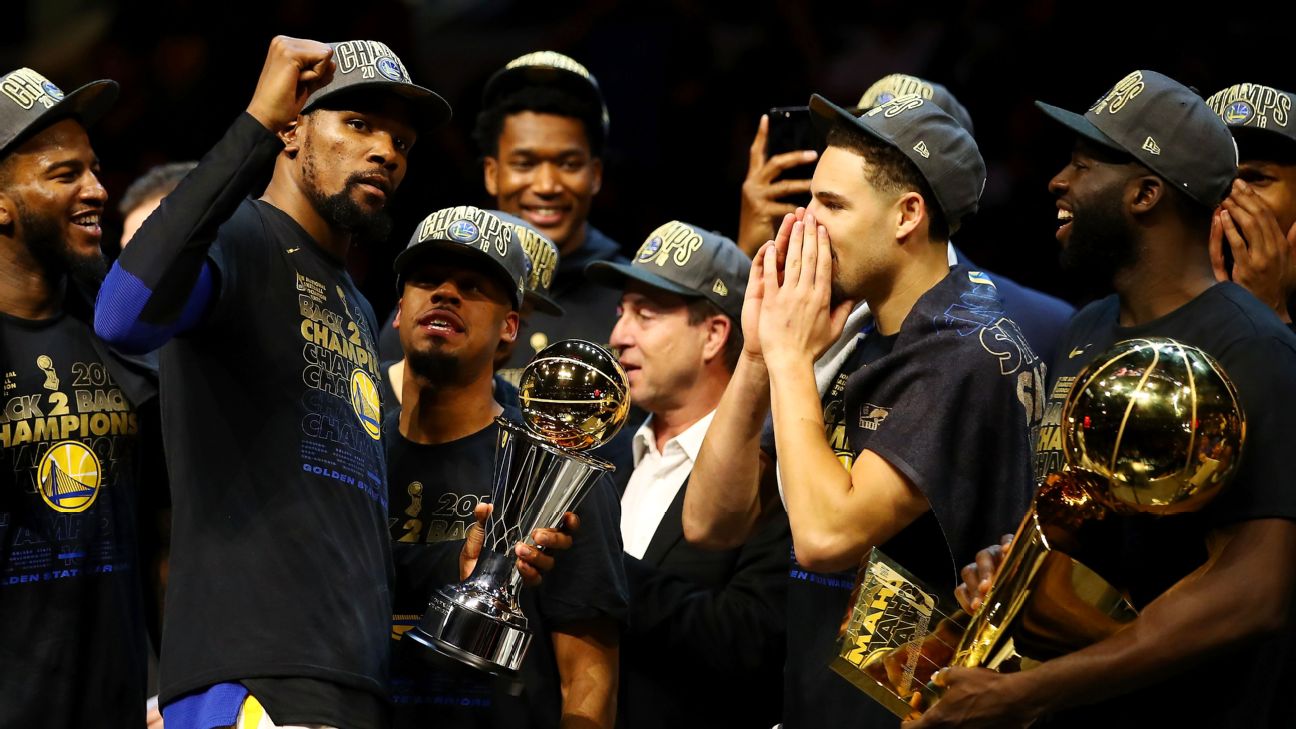 CLEVELAND -- Kevin Durant was named the 2018 NBA Finals MVP on Friday night after the Golden State Warriors finished a sweep of the Cleveland Cavaliers with a 108-85 blowout win.

The 6-foot-11 small forward captured the award for the second consecutive year as the Warriors won their third championship in four years.

"It's just about the journey, all season," Durant said. "Getting up every day, going to work with these guys, it's amazing. The environment is incredible. It's good for you to be around guys like this. It helps you become a better basketball player and a better man."

Durant averaged 28.7 points, 10.7 rebounds and 7.5 assists per game in the series. He secured his first playoff triple-double of 20 points, 12 rebounds and 10 assists in Friday night's Game 4.

In Game 3, a pivotal swing game, Durant exploded for 43 points, including a deep dagger 3-pointer late in the contest to seal the victory.

Stephen Curry, who was in the running for the award, registered a game-high 37 points and knocked down seven 3-pointers in Game 4. He splashed in 22 triples in the series.

Curry said individual accolades are "kind of a validation" but that the Warriors' title matters more.

"When it comes to me looking at myself in the mirror after every game, after every season, and know I played my best -- or I should say, I gave my best effort and had the right intentions and really appreciated every day that I got to play -- and I can go in the locker room right now and look at every one of my teammates in the face and have that sense of pride of what I was able to do out there on the floor and how I can help my team win a championship, that's all that matters to me," Curry said. "KD's been amazing these last two years, especially in the Finals, and so deserving of back-to-back Finals MVPs. I'm going to be his biggest fan in there with what he's able to do."

The vote for Finals MVP was 7-4 for Durant over Curry.

"Does it matter? Does it? Does it?" Durant said of his winning the award over Curry. "We won two championships. We just won back-to-back. I don't think anybody's even worried about that type of stuff. I'm glad that we came out and played a great game tonight. We were able to finish the series off. That's the only thing that matters to us."

Durant, LeBron James (2016) and Andre Iguodala (2015) are the three recipients of the honor in the past four years.

Durant also is the sixth player to win the award in consecutive years, with Jordan, O'Neal, James, Olajuwon and Bryant the others.

Since 2009, the award has been named for Celtics legend Bill Russell, the 11-time champion who surely would have won the award several times if it had existed in his playing days. The Finals MVP was first handed out in 1969.

Durant is one of 30 players to win the award.

Durant 'grateful' for back-to-back championships
Kevin Durant reacts to winning back-to-back NBA Finals MVPs and explains what it was like competing against LeBron James.