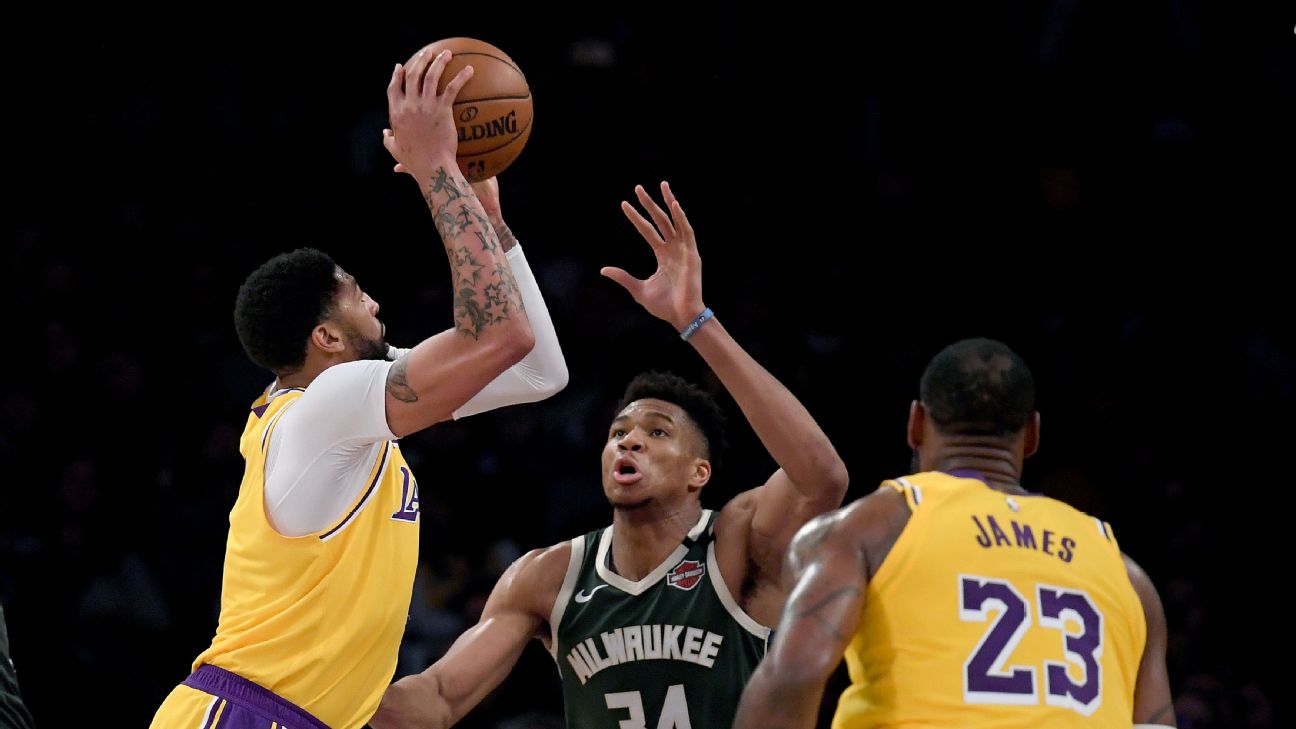 LOS ANGELES -- Carrying the main card billing of an NBA Finals preview and perhaps the decisive showdown between the league's top MVP front-runners, Friday's heavyweight bout between the Los Angeles Lakers and Milwaukee Bucks possessed the sort of stakes offered in June, not March.

And from the opening tip in an electric but on-edge Staples Center, the game itself took on a playoff-like intensity. Possessions transformed into grinding battles, regular-season whistles were put on hold while physicality reigned, and points were hard-won. The season-long dominance of both teams against most everyone else dissipated against each other, and a grinding battle ensued, befitting the caliber of two equally matched contenders.

In the end, the Lakers clinched a playoff berth by defeating the Bucks 113-103. It marked the final regular-season matchup, and foreshadowed what might unfold should these teams meet again in June, when a championship will be on the line.

Until that potential reunion, here are the key moments, observations and takeaways:

On a night when the Bucks played against the team with the second-best record in the NBA, and Giannis Antetokounmpo faced off against another MVP front-runner in LeBron James, Antetokounmpo was focused on another player in his pregame warm-up: Anthony Davis.

It is two hours before tipoff, and after 15 minutes of work on midrange shots, 3-pointers and free throws, Antetokounmpo is ready for a simulation. He needs Schuyler Rimmer, who works in the Bucks' video room, to stretch taller, get longer and spread his fingers wider. Antetokounmpo is pushing Rimmer to become a makeshift Anthony Davis. The 2019 MVP has positioned Rimmer's body the way he has seen Davis guard him on tape. He instructs Rimmer to fan out his arms.

Opposing coaches often say that Antetokounmpo's menacing style of play demands to be guarded by committee. Davis would be the Lakers' primary stopper against Antetokounmpo, and Antetokounmpo wanted to be prepared ... to start.

Ultimately, Davis defended Antetokounmpo only 10 times Friday night, according to Second Spectrum. Six of those matchups were in the first quarter, but Davis drew two early fouls and ceded the matchup to LeBron James, who matched up with Antetokounmpo 35 times in the game.

On the other end, Antetokounmpo guarded Davis 37 times in the half court, yielding 12 points in those matchups, according to Second Spectrum. Antetokounmpo was preparing for moments like late in the third quarter, when Davis steamrollered toward the basket. Antetokounmpo set his feet and forced Davis to commit an offensive foul. As he ran down the court, Antetokounmpo wagged his left index finger in the style ofDikembe Mutombo.

In the end, Antetokounmpo had to guard Davis often. The Lakers had the luxury of freeing up Davis on the other end. -- Malika Andrews

During their December duel in Milwaukee, the Bucks' reserves outscored the Lakers' backups by a whopping 34-4 margin throughout a game the Bucks often led by double digits. (Even wilder: Bucks reserve guard Kyle Korver outscored the Lakers' bench by himself in that game, 6-4.) It was the kind of performance that proved the Bucks' balance, and that they were far more than just Giannis Antetokounmpo.

In the rematch, the Lakers' bench more than rebounded, scoring 33 points to the Bucks' 32. But the more worrisome aspect for Milwaukee was the lack of production that it received from anyone outside of its reigning MVP, who didn't even have his best performance as it was.

Starting small forward Khris Middleton, who was on pace to become the ninth player in NBA history to shoot at least 50% from the field, 40% on 3-pointers and 90% from the free throw line, was off target for most of the night. The All-Star scored just 12 points on 5-of-19 shooting.

Starting shooting guard Wesley Matthews, who is often a reliable weapon from 3-point range, tallied only three points on 1-of-6 shooting from beyond the arc. Starting point guard Eric Bledsoe scored only 11 and struggled with foul trouble. And off the bench, the Bucks received little relief beyond 17 points from Donte DiVincenzo.

And when the Bucks found themselves clanking shots off the iron too often, they predictably turned to the Antetokounmpo to stop the bleeding. With the pressure ratcheted up, the Lakers surrounded him, making life even more difficult. That's not to say the Bucks' supporting cast is a question; indeed, the team has had few weaknesses at all while on its 69-win pace.

But on Friday's prime-time stage, the Bucks appeared unbalanced, with far too many players coming up short outside of their star. -- Baxter Holmes

The league's best team featuring the league's reigning MVP was on the road and leading 55-50 shortly after halftime when LeBron James and the Lakers went on the type of run that made you wonder which side deserves those superlatives.

Los Angeles busted out an 18-0 run -- the largest by any team against the Milwaukee Bucks this season, according to research by the Elias Sports Bureau -- and James' fingerprints were all over it:


When the extended spurt had subsided, James kept pouring it on -- scoring on consecutive possessions with Giannis Antetokounmpo guarding him, the first one on goaltending by Antetokounmpo and the second on a brilliant sweeping drive to the hoop with seemingly the entire arena standing in anticipation of what The King would do.

For the quarter, James had 14 points on 5-for-6 shooting to go with three assists, and the Lakers outscored the Bucks by 11 points in the 8 minutes and 20 seconds he played. And by the start of the fourth quarter, the prevailing thought about the league's best team and MVP shifted to some degree from Milwaukee to Los Angeles. -- Dave McMenamin

Anthony Davis had a feeling this was going to be a low-scoring, physical kind of game with two of the top four defenses on the floor.

But was the messy, low-scoring first quarter because of great defense or bad shooting?

The Lakers and Bucks combined to hit only 3 of 25 3-pointers, the third-worst 3-point-shooting first quarter in the past 20 seasons.

"Playoff nerves?" Lakers coach Frank Vogel said of the messy but intense first half, in which both teams struggled to find any kind of rhythm.

"It definitely felt like two teams feeling each other out."

Eventually, the Lakers did feel the Bucks out. Or rather, they made the Bucks feel them -- beating Milwaukee with physicality and dominating in the paint in ways Giannis Antetokounmpo and the Bucks usually do.

Milwaukee leads the league in defending the paint, giving up only 38.8 points a game inside. Friday night, the Lakers scored 50 points in the paint, led by LeBron James' 18.

Those six 3s the Lakers made also tied a season low for a Bucks opponent. The Oklahoma City Thunder were also the only team to shoot a worse percentage on 3s (17.1%) against the Bucks than the Lakers shot Friday night. The Bucks gave up six 3s when they beat the Thunder by 47 points a week ago. The Bucks lost by 10 on Friday night.

With under five minutes to go in the third quarter, a buzz started circulating throughout Staples Center.

A star-studded crowd that included Jay-Z and Michael B. Jordan was about to get what it came to see: the main attraction MVP showdown between Giannis Antetokounmpo and LeBron James.

On three consecutive possessions, the two best players on the court went back and forth, like an old-school one-on-one superstar isolation duel. On one possession, James backed in Antetokounmpo on the right block, drove in, pump-faked before scoring after Antetokounmpo was called for goaltending on a block attempt.

The reigning MVP came back and answered with a 3-pointer. Then James had Antetokounmpo one-on-one again, this time on the left block. The arena was buzzing again as James faced up Antetokounmpo, drove into the paint and scored.

Three days after Super Tuesday, James began a pivotal weekend that could propel his own campaign and make this MVP race a hotly-contested debate. On Friday, he faced the favorite to win MVP again in Antetokounmpo before a rematch with Kawhi Leonard and the LA Clippers on Sunday.

Two wins over teams the Lakers hadn't beaten this season would certainly bolster James' 2019-20 MVP résumé and close the gap between himself and Antetokounmpo.

At 35, James has had an incredible season, keeping the pedal to the metal and playing every game as if he's on a mission.

Did we learn anything from this latest matchup between the two MVP juggernauts? Besides home-court advantage being nice to have, having two superstars compared to one was a clear edge on this night.

When James needed a rest in the fourth, Anthony Davis attacked Antetokounmpo before finishing with 30 points and nine rebounds after early foul trouble. Meanwhile, the Bucks' superstar got only 12 points and 5-for-19 shooting from his All-Star teammate, Khris Middleton.

In the teams' previous meeting on Dec. 19 in Milwaukee, the Bucks beat the Lakers by giving Antetokounmpo more support.

Antetokounmpo had 34 points, 11 rebounds, 7 assists and sank five 3-pointers, but the Milwaukee bench outscored the Lakers' reserves 34-4 in that 111-104 win.

Both teams were 24-4 entering that game, but the Lakers had gone 23-9 since that meeting entering Friday night. The Bucks had lost only five times since the first encounter with the Lakers. Actually, make it six now as James added the Lakers' most impressive win of the season.

At the end with 20.3 seconds left, the Staples Center crowd serenaded James at the free throw line with more MVP chants as the game was decided at that point. -- Ohm Youngmisuk 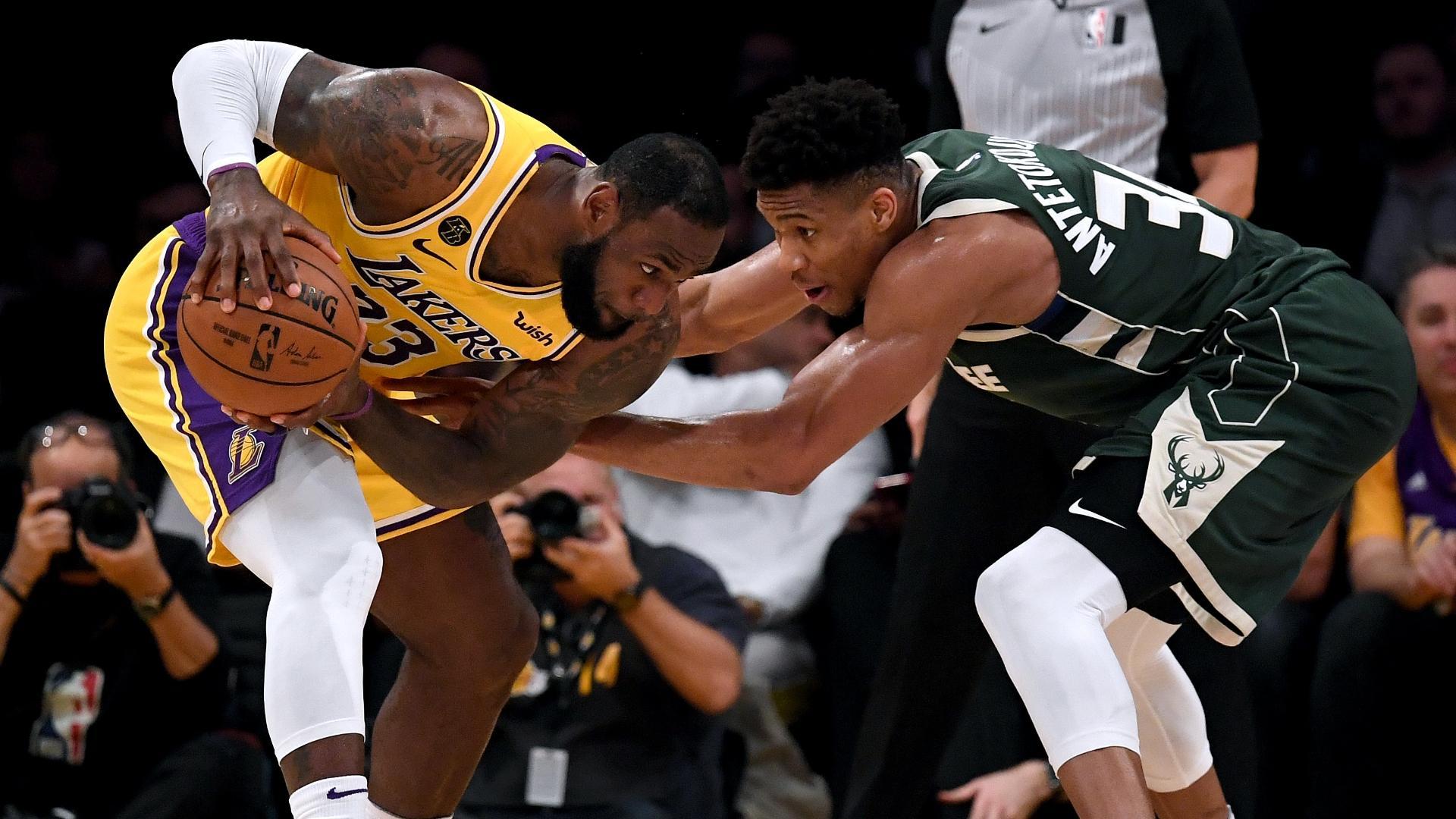 Did LeBron, Lakers send a message to Giannis and the Bucks?
Jalen Rose is impressed with LeBron James' performance against Giannis Antetokounmpo and the Bucks, while Paul Pierce is adamant Giannis needs more help in order for the Bucks to go far in the playoffs. 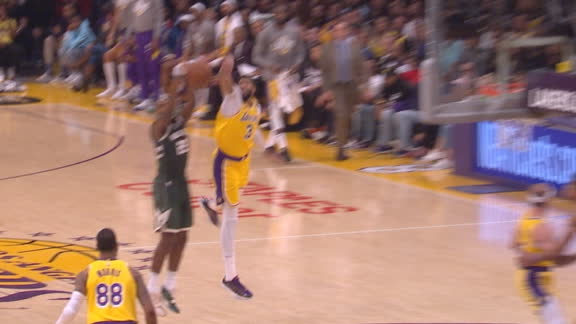 AD comes out of nowhere to block Middleton
Anthony Davis hustles up the court to block Khris Middleton's shot from behind. 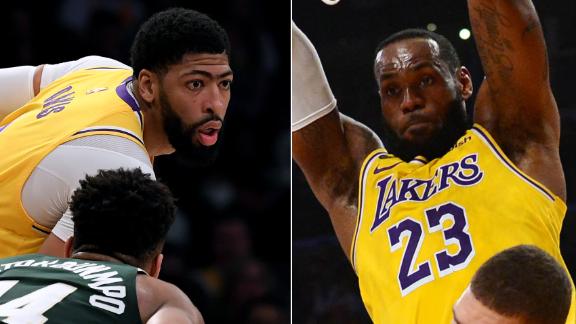 LeBron, AD fuel Lakers' 18-0 run in the 3rd
The Lakers go on an 18-0 scoring run in the third quarter powered by LeBron James and Anthony Davis. 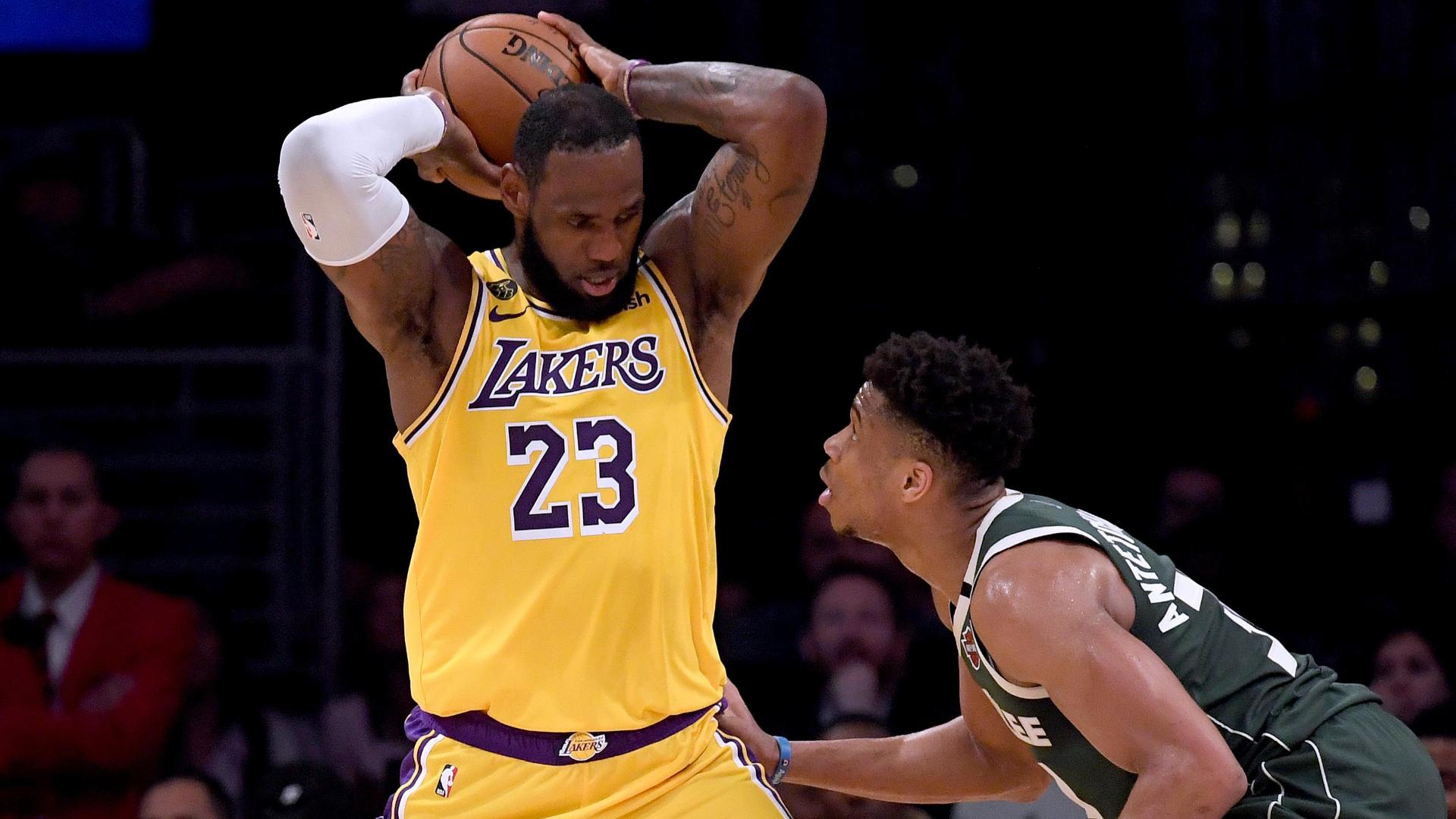 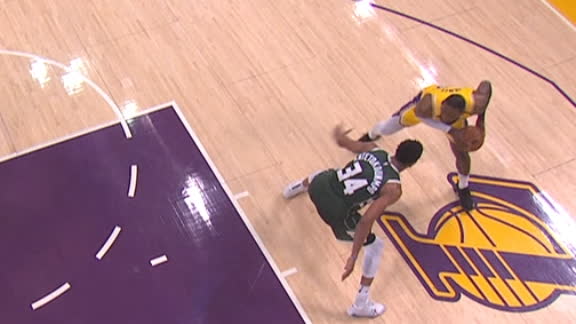