Kings game goes off without disruption outside Golden 1 Center 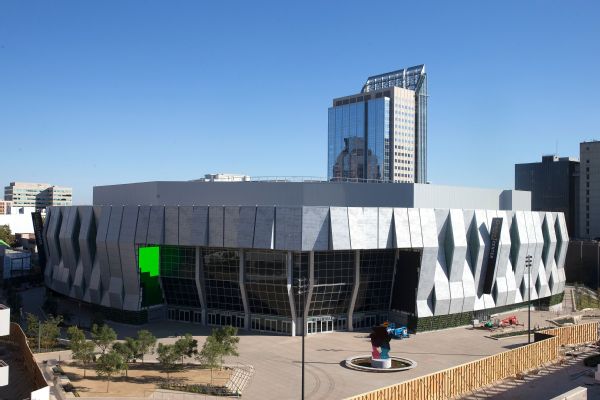 The Sacramento Kings-Indiana Pacers game tipped off Thursday without disruption from protesters outside the downtown Sacramento arena.

Police in riot gear stood outside the Golden 1 Center in case protesters attempted to block fans from entering as they had for two games prior. The marchers were gathered in protest of the fatal police shooting of 22-year-old Stephon Clark last week.

Cyclone fencing was snaked around and blocked off some stairs to an outdoor plaza surrounding the Kings' arena and workers installed barricades in some areas.

Clark's brother, Stevante Clark, had implored protesters not to block the arena.

They kept their Thursday march to downtown streets several blocks away, stopping traffic for a few hours during rush hour.

The Kings have been supportive of Clark's family, offering to set up an education fund for his two children and partnering with Black Lives Matter Sacramento to bring resources to Sacramento's black community.

Clark was killed March 18 when two Sacramento police officers responding to a report of someone breaking car windows fatally shot him in his grandparents' backyard. Police say they believe Clark was the suspect and he ran when a police helicopter responded, then did not obey officers' orders. Police say they thought Clark was holding a gun when he moved toward them, but he was found with only a cellphone.