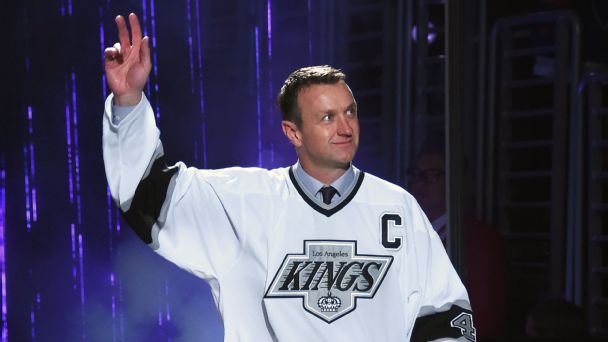 Rob Blake learned about the importance of preparation while working on his family's farm.

Growing up in Simcoe, Ontario, Blake watched his father, Robert, constantly delve into the small details of tilling the land for corn, soy beans and wheat. It taught the middle of the three Blake boys that meticulous planning always increases the likelihood of success.

"You never see people fail because of being over-prepared, but you see people fail from being not well prepared," said Blake, one of the best all-around defensemen of his generation, last week. "I think that's something I've always taken with me, even when I played. It all started with the way I was raised."

TheLos Angeles Kingspromoted Blake from assistant general manager to GM in April after firing Dean Lombardi. L.A. hopes that Blake, a Hall of Famer and Kings legend whose number is retired by the team, can reignite an organization that had lapsed into a malaise in recent years and missed the playoffs for the second time in three seasons.

In many ways, the Kings see Blake as the right person to be a GM in today's game. He's a franchise legend who retired from playing recently enough, in 2010, that he can still relate to current athletes. But he's also a deep thinker -- he played college hockey at Bowling Green -- who tries to exhaust all analytical avenues before making a decision.

L.A. hired Blake as an assistant GM in 2013. After winning a championship as part of Team Canada's management team at last fall's World Cup, he was seen as a rising star in hockey's executive ranks. He also worked with the NHL's department of player safety under Brendan Shanahan--who, as team president of the Toronto Maple Leafs,has presided over the successful turnaround of that historic franchise.

"Rob has a lot of emotion, but it won't be negative emotion, and that's very important," Kings president Luc Robitaille said. "When you're a player, you can get upset or things can get you going and you try to fix it the very next day in a game. But when you're a GM, you need to stay patient because things are not going to happen overnight, and he gets that."

In some respects, Blake inherited one of hockey's tougher jobs. The Kings have won just one playoff game since they hoisted the Stanley Cup in 2014. Although L.A. still has many of the core players from that team -- and its 2012 Cup-winning squad -- the organization painted itself into a salary-cap corner as it tried to keep the group together even as it aged.

Last season, forwardsDustin Brown and Marian Gaborik scored a combined 24 goals despite combining for a $10.75 million cap hit. Brown will be 33 this season and has five years left on his deal. Gaborik will turn 36 and has four years left.

Captain Anze Kopitar struggled during the first season of a eight-year, $80 million contract, when he had full-season career lows of 12 goals and 52 points. Goaltender Jonathan Quick missed all but 17 games because of a groin injury suffered in the season opener. CenterTyler Toffoli dropped from 31 goals in 82 games in 2015-16 to just 16 in 63 games last season.

When Blake assumed the job, he saw these shortcomings and believed a wholesale change didn't make sense. Not only was he hamstrung to a degree by Gaborik's and Brown's deals, he believed that Kopitar, Quick and Toffoli were still in their primes and should bounce back. Plus, forwards Jeff Carter and Tanner Pearson-- along with defenseman Drew Doughty-- had strong seasons in 2016-17, providing more reason for hope.

Blake decided, instead, that the team's system needed to be altered in order to push its offensive pace. Darryl Sutter, who coached the Kings from 2011 through last season, was also fired when Blake was elevated to GM. It seemed like Sutter's defense-first system had become stale.

Blake met with John Stevens, who had been one of Sutter's assistant coaches, and chatted about changing the team's approach. Stevens and Blake agreed that while the Kings had a strong puck-possession game in the offensive zone, too many of their chances were coming from near the boards and not from high-danger areas in the middle of the ice.

This was a major reason Los Angeles was tied for 24th in offense last season, with 2.43 goals per game, and tied for 27th in shooting percentage, at 7.8 -- despite being one of the top teams in 5-on-5 shot attempts.

Stevens explained how he could institute some systemic tweaks to change these numbers. Blake was sold, and offered Stevens the head coach job.

"I think it all started with trying to figure out how goals are being scored. Is it holding the puck in the corner and creating a 30-second possession time? I'm not sure it is," Blake said. "At the end of the day you have to find a way to get the puck to the slot, and there are different ways [to do that]."

The team hired Pierre Turgeon -- who had 1,327 points in 1,294 career games -- for a position it called "offensive coordinator." Turgeon is charged with trying to get players in the right spots to score. It's tough to know if Turgeon, who has no NHL coaching experience, can mold the personnel into a more offensive group, but it's a move that certainly piqued the interest of people around the league.

"You can free up guys with system, with structure, with confidence, with style of play to drastically change the way they play," NHL Network analyst Johnson said. "I don't know if all their players can do that. I don't know if their personnel will allow them to make that kind of jump, but I do think with a different philosophy guys can become significantly more offensive."

The Kings could well encounter the same problems in 2017-18 as recent squads have. The only major on-ice moves Blake made were adding 35-year-old forwardMike Cammalleri,who is two years removed from a 27-goal season, and defensemanChristian Folin, who has just 118 games of NHL experience. That being said, while Blake is confident that he will see gains and believes he has prepared for all options, he knows it's important he's prepared to pivot if this plan doesn't pan out.

"We tried to address different things," Blake said. "The game is played a little differently than it had been the last 10 years. Those are some of the things we keyed in on over the summer. We've yet to play a game, but we think we've taken strides in that direction."
Report a correction or typo
Related topics:
sportsespnmichael cammalleriteam canadabrendan shanahanworld cup of hockeyrob blakelos angeles kingsdarryl sutternhlluc robitaillejonathan quickdustin brownjohn stevensanze kopitargeneral managerhall of fametyler toffoli
Copyright © 2021 ESPN Internet Ventures. All rights reserved.
More Videos
From CNN Newsource affiliates
TOP STORIES