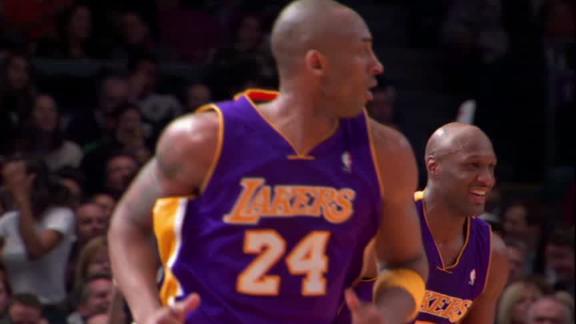 The Knicks will look to beat the odds and build a winning streak Wednesday night when they host the Los Angeles Lakers in their second and final meeting of the season.

Both teams were off Tuesday after playing eventful games Monday, when the Knicks ended a three-game losing streak with a 106-86 win over the host Cleveland Cavaliers and the visiting Lakers absorbed their most lopsided defeat of the season with a 139-107 road loss to the Boston Celtics.

The win was just the second in the last 10 games for the Knicks, who endured a five-game losing streak before beating the Miami Heat, 124-121, on Jan. 12. On Monday, New York trailed 50-49 at the half before limiting the Cavaliers to 27.7 percent shooting (13-of-47) over the final two quarters.

"When we're going those stretches and getting a bunch of stops, we feed off of that," said Knicks interim head coach Mike Miller, who is 8-14 since taking over for David Fizdale. "Our defense winds up being solid. When it's trading baskets, when we can get two, three stops that leads to two, three more. We put together consecutive stops and we were able to rebound it in the second half. That gave us a chance."

The Knicks aren't likely to be given much of a chance Wednesday against a Lakers team almost guaranteed to be angry following Monday's rout. Los Angeles trailed by 14 at the half, fell behind by 20 before the midway point of the third quarter and plummeted into a 30-point hole early in the fourth.

"Listen, it was just a good old-fashioned butt whooping, that's all," superstar LeBron James said after the Lakers fell to 34-9 this season.

Lakers head coach Frank Vogel was not as willing to chalk the loss up to a bad day, especially given the ease with which the Celtics took control in the second quarter, during which Boston held a 14-5 rebounding advantage and outscored Los Angeles 36-25.

"That's one of the most disappointing things for me, because I feel like that's a controllable thing: Boxing out and hitting people, and we didn't really do it all in the first half," Vogel said. "So I'm very disappointed in that, but really from the total performance."

The Knicks are already accustomed to finding a bad time to run into a superstar and his team. Two days after the win over the Heat, New York visited the Milwaukee Bucks and a fully healthy Giannis Antetokounmpo, who was over his sore back and scored 37 points in a mere 21 minutes as the Bucks cruised to a 128-102 win.

The availability of Knicks forward Marcus Morris for Wednesday is uncertain after he suffered a sprained ankle during what turned out to be a four-point play Monday. Rookie RJ Barrett is also expected to miss a third straight game with his own ankle injury.