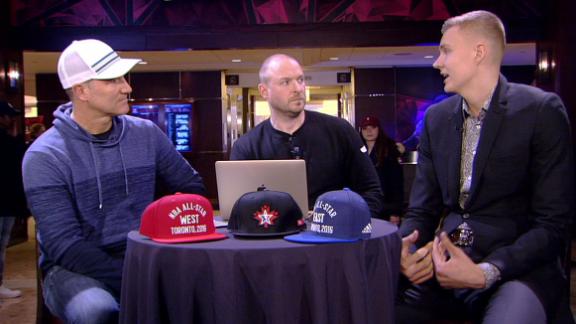 GREENBURGH, N.Y. -- New York Knicks rookie Kristaps Porzingis was hoping to relax with family during his All-Star break vacation and maybe enjoy some quiet time. But that didn't happen.

"I didn't have a lot of space," Porzingis said Wednesday, recalling his trip to the Caribbean. "There were a lot of people from New York, and I was taking a lot of pictures. Whenever I walked out, there was a lot of autograph [seekers], pictures, and I didn't really get a chance to relax like 100 percent. But it was good to spend time with the family."

Porzingis, 20, learned a valuable lesson during the less-than-ideal vacation.

"This just showed me that I'm not a normal person anymore, especially when there a lot of people who recognize you, a lot of people who want to take pictures because I'm tall," he said. "I can't really hide it. That's a problem. I have to change plans from now on.

"I was thinking I'm going to go there, I'm going to relax (and) nobody is going to bother me because I'm on vacation. No. That didn't happen. That's what I'm going to have to deal with for the rest of my life."

Porzingis is arguably the most popular athlete in New York at the moment. He is still getting used to all of the attention and was grateful to return to the gym Tuesday.

"This is my church," he said. "So I came here, got some shots up by myself, moved around. No noise. No nothing."

Porzingis and the rest of the Knicks officially returned to practice Wednesday after nearly a week away. New York is 23-32 entering the final two months of the season, five games behind the Charlotte Hornets for the eighth and final playoff spot in the Eastern Conference.

Knicks interim coach Kurt Rambis said Wednesday that the team's "No. 1 goal" is to make the playoffs.

"We're capable of doing that, I think," Porzingis said. "(But) that's not easy."

The NBA trade deadline is 3 p.m. ET on Thursday. The Knicks are seeking help in the backcourt, according to league sources, but hadn't yet put together a package strong enough to land any top talent on the market.

One player not available via trade, according to team president Phil Jackson, is Porzingis.