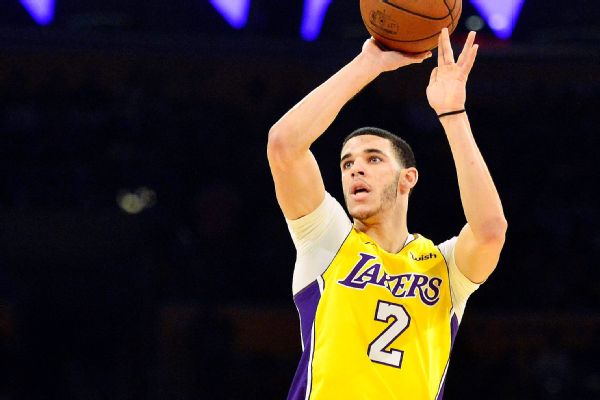 EL SEGUNDO, Calif. -- Lonzo Ball will miss Friday night's game against the Milwaukee Bucks due to a left knee contusion.

Ball is considered day-to-day after suffering the injury during the third quarter of the Los Angeles Lakers' win over the Dallas Mavericks on Wednesday. The rookie point guard underwent an MRI on Thursday that confirmed the injury.

"Lonzo got treatment today," Lakers coach Luke Walton said Friday at the team's shootaround. "He said it feels better. He will keep getting treatment, and then the trainers will activate him and get him going at some point and tell us that he can start doing on-court stuff again. But that is up to them."

Rookie Josh Hart, who missed the last 14 games due to a left hand injury, will return Friday night and will not have a minutes restriction.

Ball was kneed in the back of his knee on a screen against Dallas. However, he made it clear that this injury is not in the same place nor nearly as severe as the sprained MCL in his left knee that caused him to miss 15 games earlier this season.

Walton said the Lakers will be cautious with any injuries, especially with the season winding down.

"We want to finish the season strong and build some momentum into the offseason," Walton said. "But because we are obviously eliminated from the playoffs, we got a young team and know how valuable and important this offseason is going to be for us, we also want to be healthy going into it.

"If it is something that is not a risk of putting yourself in jeopardy to miss a big part of the season, we still expect you to play. But we will be careful and cautious with the timing of bringing him back."
Report a correction or typo
Related topics:
sportsespnkneecontusionjosh hartluke waltonnbalonzo balllos angeles lakers
Copyright © 2021 ESPN Internet Ventures. All rights reserved.
TOP STORIES
Becoming a foster parent, Clovis family shares their journey
Fresno woman admits role in 'thruple' child sex abuse case
Fresno residents hoping for more representation as redistricting nears
Good Sports: Lorenzo Neal's jersey being retired by Fresno State
Cause of death to be released in case of family found on hiking trail
Gas hits $7.59 a gallon in CA town
FDA OKs mixing COVID vaccines; backs Moderna, J&J boosters
Show More
Driver found dead inside crashed car, detectives investigating
Madera Unified raises substitute teacher pay to highest in Valley
Police find items belonging to Brian Laundrie, apparent human remains
Storm to move through Central CA this week. What to expect
Kristin Smart case: Paul and Ruben Flores to stand trial next April
More TOP STORIES News