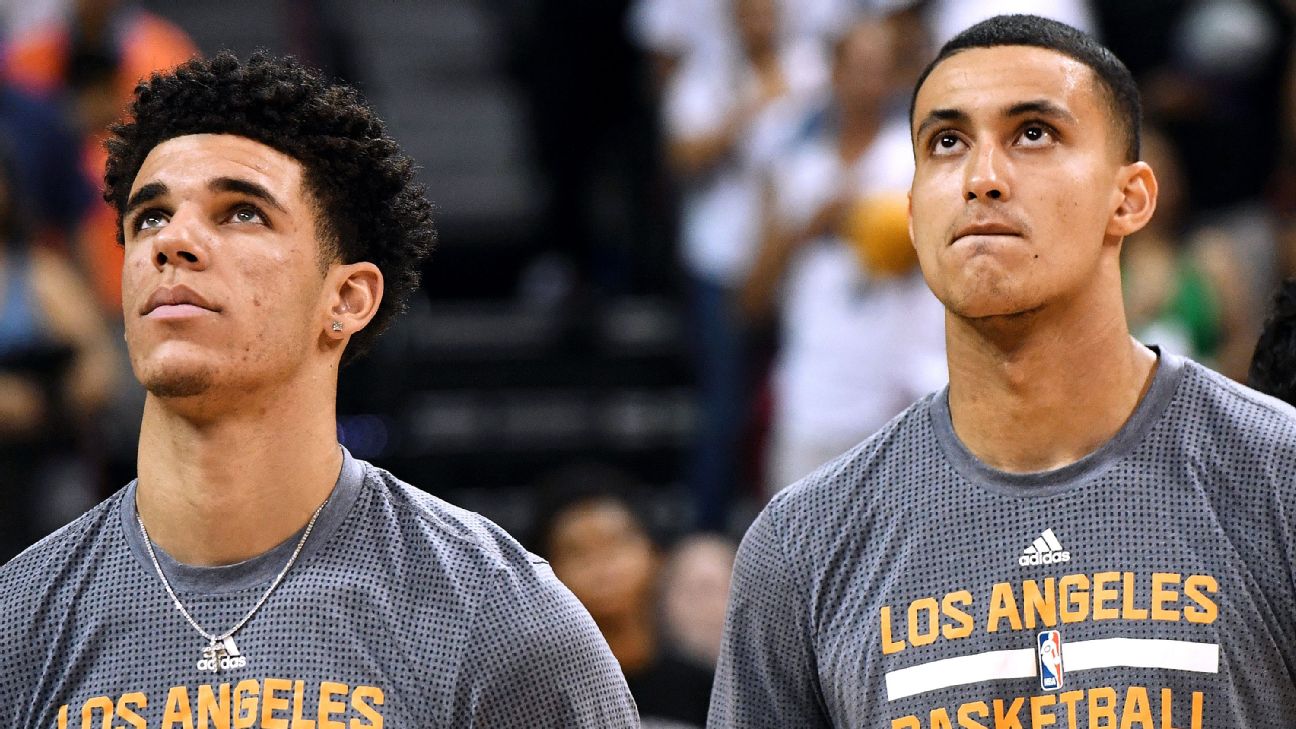 EL SEGUNDO, Calif. -- Moments after the NBA announced that he had earned first-team All-Rookie honors and accomplished a season goal he had set for himself, a sweat-drenched Kyle Kuzma was on the Lakers' gym floor working on his dribbling and a variety of back-to-the-basket turnaround moves with assistant coach Miles Simon.

Kuzma has been working out at the Lakers' practice facility for the past three weeks, doing two-a-days hitting the weight room and basketball court.

And Kuzma hasn't been alone. Kuzma, who has added noticeable muscle, says Lonzo Ball has been in the weight room as well.

"Consistency in the weight room, that is the biggest thing," Kuzma said on Tuesday of what he has seen out of Ball this offseason so far. "He has been in there pretty much every day I have been in here around this time. You can tell he is taking the weight room a lot more serious and that is going to help him by allowing him to recover faster and hopefully next year be on the court more because of that weight room."

When the Lakers' season ended, team president Magic Johnson told Ball that this would be the "biggest summer" of his life. The Lakers want to see Ball -- who was limited to a total of 52 games due to injuries but still earned second-team All-Rookie honors after averaging 10.2 points, 7.2 assists and 6.9 rebounds -- add more muscle to his wiry frame in hopes of improving his ability to stay on the court.

This is Ball's top priority of the offseason, more than working on his perimeter shot or developing more offensive moves attacking defenses toward the rim.

When the Lakers' season started, the team's rookies all wrote down a goal of theirs. Kuzma's target was to make the All-Rookie team. On Tuesday, Kuzma was named first-team All-Rookie, joining Philadelphia's Ben Simmons, Utah'sDonovan Mitchell, Boston's Jayson Tatum and Chicago's Lauri Markkanen. Kuzma had the fourth-most first-place votes.

"From day one, they let me be who I am," Kuzma said of the freedom Luke Walton and the Lakers' coaching staff gave him after the team held another draft workout this week. "A lot of rookies don't come into the league and have that type of leeway that Coach Walton and his staff really gave me."

Kuzma, Ball and Josh Hart are among the Lakers' young players who have been in the team's practice facility often since the season ended over a month ago. Kuzma says watching other rookies like Tatum, Mitchell and Simmons go deep into the postseason has been motivation.

"All those guys are getting talked about a lot," Kuzma said. "For me, if I was in the playoffs, it would be the same way. Those guys are doing well."

"Guys are working," Kuzma added of the Lakers. "Not everybody is [just] working out here like I am. I am one of the few guys. [Brandon Ingram] is -- wherever he is, I don't know where he's at. He fell off the grid a little bit but I know he is working [and training]. Zo as well ... [I'm] just coming in and lifting and then being on the court. Pretty much a mandatory-type thing. Everybody should be doing that and I think for the most part everybody is."
Report a correction or typo
Related topics:
sportsespnbrandon ingramjosh hartnbakyle kuzmalos angeles lakerslonzo ball
Copyright © 2021 ESPN Internet Ventures. All rights reserved.
TOP STORIES
Historic downtown Fresno house destroyed in large fire
Clovis motorcyclist killed after early morning crash with trailer
Hundreds turn up for final day of Big Fresno Fair
Valley teacher needs your help to win a $2,000 award for her students
Loved ones say goodbye to Fresno teen killed in alleged DUI crash
1 killed, 1 injured in Merced County crash, CHP says
Bicyclist killed after being hit by truck in Merced County
Show More
Fire tears through Visalia apartment building
Bill Clinton released from UCI Medical Center after blood infection
Merced school's theatre kids showcase their talents at haunted house
Over 100 people join Visalia rally opposing hate crimes against Asians
Bulldogs win turnover battle, bounce back with 17-0 win at Wyoming
More TOP STORIES News