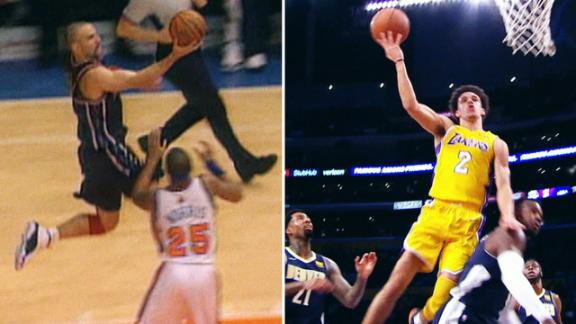 EL SEGUNDO, Calif. -- Well before their No. 2 overall pick nearly made history by almost becoming the youngest player in NBA history to collect a triple-double, the Los Angeles Lakers began their education of Lonzo Ball by digging into the archives.

Walton pored over clips of John Stockton developing a Hall of Fame connection with Karl Malone in Utah, Steve Nash mastering the pick-and-roll with Amare Stoudemire in Phoenix and, most important, Jason Kidd igniting a transformative fast break in New Jersey.

"Just trying to find the best way to build out around the personnel we have," Walton said. "We did some research on some older teams to try to come up with what we felt was best for our guys."

Ball, who faces the stiffest test of his pro career to date when John Wall and the Wizards visit Wednesday night (ESPN, 10:30 ET), has a long way to go to follow in the footsteps of those legendary point guards. But the Lakers want to do all they can to enhance his pass-first, push-the-ball strengths.

It's no coincidence they examined Kidd, who shares a lot in common with Ball. Both were born in California and played their college ball there -- Kidd at Cal,Ball atUCLA-- before being selected second in their respective drafts. Kidd began his career with Dallas in 1994, but the Lakers researched his arrival in New Jersey in 2001, and how he turned a Nets franchise that was a perennial laughingstock into a back-to-back Eastern Conference champion.

There's plenty these young, rebuilding Lakers can take from those Nets. Both franchises won 26 games the season before their pass-first point guards arrived. Those Nets were also coached by a former Laker. Byron Scott, 40 years old at the time, was in his second year at the helm and constantly wanted the Nets to run and defend like his old Showtime teams did.

Walton, who played 8 seasons for the Lakers, is now 37 and in his second year at the helm in Los Angeles. He is best friends with former Arizona teammate Richard Jefferson, who was a rookie on that Nets team when Kidd arrived from Phoenix in a trade for Stephon Marbury.

Jefferson shared with Walton and Mermuys the nuances of "the commitment to running" on every play and how Kidd developed an instant chemistry with a young, unproven core of Kenyon Martin, Kerry Kittles and Keith Van Horn.

"Guys would see SportsCenter and see his highlights and don't understand that was an everyday thing for seven years in practice," Jefferson said of Kidd. "He would give you four or five passes that you never, ever seen before. It was absurd."

At the start of training camp, the Lakers sounded a lot like those Nets did when Kidd first practiced with them. Players marveled at Ball's passing and vision and how easy he made the game for them. They also talked often about how they wanted to be the fastest team in the league and to push the pace all the time. The Nets said all the same things during their first camp.

But teaching the young Lakers how to run has not been easy. And when Ball sprained his ankle and was limited to only two preseason games and very few practices in camp, Walton was forced to table the learning process on the transition game.

"It is much more difficult to execute it as opposed to just saying we want to run every time and we want to be the fastest team," Walton said. "We kind of put that message in our players' minds and now we take a little bit back and [are] executing some of the work that needs to be done to become a good running team."

"That is still how we are going to play," Walton said of running. "But it is just been the whole process has been slowed down a little bit."

The Lakers have young, athletic and unproven talent to run with Ball. There's last year's No. 2 overall pick Brandon Ingram, whom team president Magic Johnson hopes can run with Ball the way James Worthydid when he filled the wing for Johnson and the Lakers during their Showtime days.

Walton believes he has the fastest pair of 4s in Julius Randle, who has a crafty offensive game, andLarry Nance Jr., who likes to play above the rim and throw down alley-oops and prides himself on defense and hustle plays. Kentavious Caldwell-Pope is a streaky, wiry, two-way player like Kittles, if not as good a perimeter shooter yet as the former Net was.

Like Jefferson was in 2001, Kyle Kuzma is an energetic, first-round rookie forward who has instantly bonded with his point guard, plays with a chip on his shoulder and likes to run the floor. And the Lakers have a capable sixth man, Jordan Clarkson, who can provide outside shooting and a spark off the bench.

But it is Ball who will try to make this collection sing the way the Nets did with their harmonious fast breaks. He is only 19 -- he'll turn 20 on Friday -- and just starting his career, whereas Kidd was in his prime and well on his way to becoming one of the most respected NBA leaders in recent memory.Kidd also has arenowned basketball mind. He is currently in his fifth season as an NBA head coach; his Buckswill welcome the Lakers to Milwaukee on Nov. 11.

Mermuys wanted to study how teams tried defending Kidd, who averaged 14.7 points, 9.9 assists, 7.3 rebounds and shot just 39.1 percent from the field in his first season with the Nets. Kidd hadn't yet developed the perimeter shot that would make him one of the top 10 3-point shooters in league history, and yet he still could control a game.

"I don't think in the history of the game there has ever been a guy to dominate more games without scoring," Jefferson said.

Entering Wednesday's game, Ball is averaging 13.3 points, 9.3 rebounds and 8.7 assists and is shooting 34.8 percent from the field. Mermuys wants Ball and the Lakers to be prepared -- and figure out ways to still impact the game -- when teams sag off the rookie to take passing lanes away from him.

"Not that we are putting that kind of pressure on Zo,"Mermuys said of the Kidd comparison, "but [we're] just kind of trying to maximize his talent of throwing ahead and help him make it as easy as possible for him to do. Obviously J-Kidd is an incredible player. Every time we faced him, even late in his career, I was always amazed by his ability to kind of see the game before the game is actually happening. I was in the same sort of awe of Lonzo from the standpoint of the game being so slow for him as such a young person.

"For [Ball] to innately take [mental] snapshots and kind of see plays develop before they are happening, you can't coach that. That is an incredible feel for the game and an incredible talent that very few guys have."

The Lakers do not expect their prized point guard to match what Kidd did when he directed the Nets to 52 wins and an appearance in the NBA Finals in his first season in New Jersey (which was his eighth season overall).

"We are not trying to be the modern-day Nets," Walton warned.

But the Lakers do want to see if they can run like those Nets did, with an unselfish point guard who, with his MVP performance at the Las Vegas Summer League, reminded many of the league's execs, coaches and scouts of Kidd.

Walton is going to give Ball the freedom to figure things out and experience every situation possible, no matter how many growing pains the rookie has. The Lakers will live with the type of turnovers that come with trying to run all the time and Ball probing his way through pro defenses for the first time.

When they can't run, Ball and the Lakers will play out of their read-motion-like base offense. At their best down the road, Walton envisions that the Lakers will run like the Nets and move the ball like the Warriors. Although the Lakers roster doesn't have Golden State's perimeter firepower, Walton ideally wants everyone on the floor to be a threat to attack the rim -- but he cautions his team is far from that right now.

"We are looking at what we have as a team, what our biggest strengths and deficiencies are, and we are trying to cater toward what we feel can give us a chance at winning games," Walton said.

That is why Walton and Mermuys went back in history to look at some of the best passers to ever play, to potentially help Ball carve out his own history.

"Steve Kerr used to always say, 'The simple will lead to the spectacular,' as if one, two, three, four passes are all simple, but then that possession ends up being spectacular," Walton, a former Golden State assistant, said of the Warriors' head coach. "And that is the same way with how Lonzo and some guards like that [play]. There are not a lot of guards that play that way, but the ones in the past that did have been spectacular at playing that position.

"Obviously, when Jason got there, he was already really good and understood the NBA and one of the best leaders in our game. That is where we think Zo, the path he will [eventually] take." 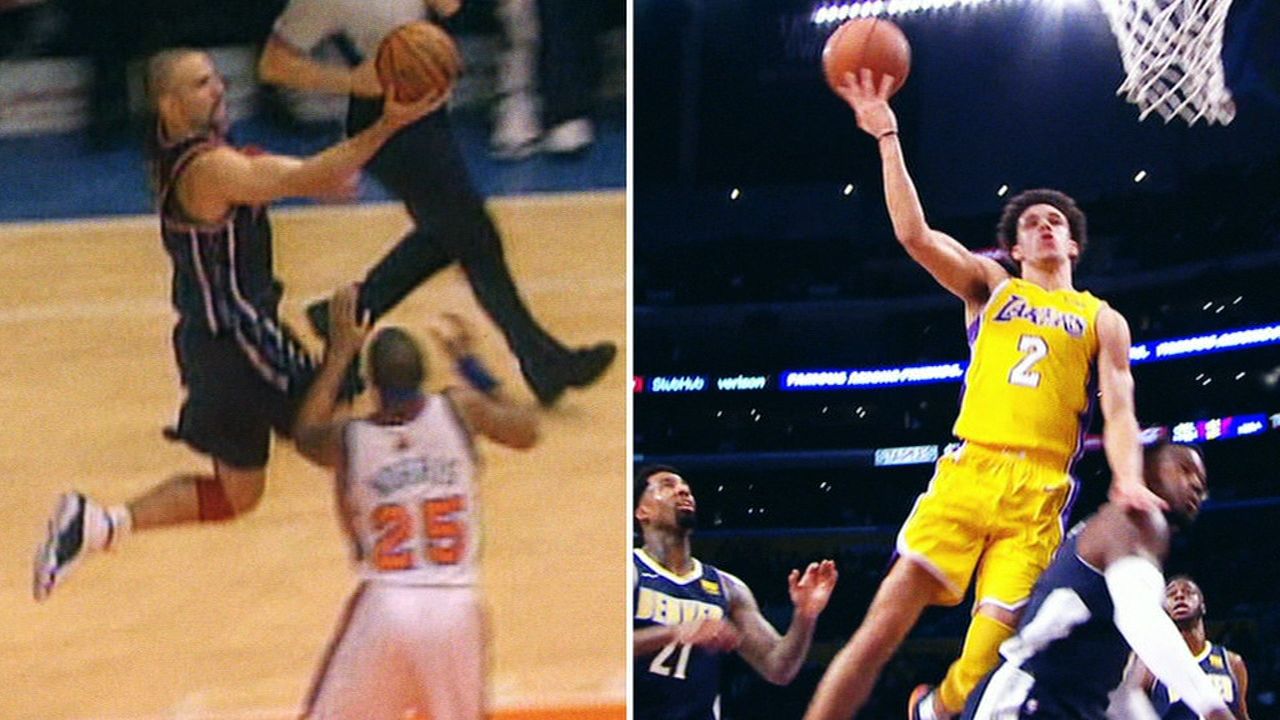