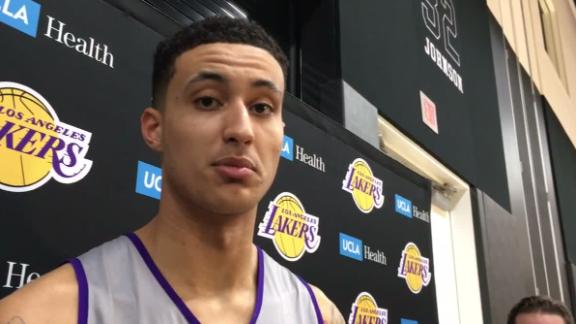 Buss posted a picture of her sitting at a dinner table with general manager Rob Pelinka and Walton while tweeting that she was on her way to Memphis for this weekend's Martin Luther King Jr. events surrounding the Lakers-Grizzlies game on Monday.

Then, after the Lakers won their season-high fourth consecutive game with a 107-101 overtime win in Dallas on Saturday, Johnson twice tweeted praise for Walton after the organization had been silent since Ball told ESPN last Sunday that the coach had "lost" the Lakers locker room.

Sources close to the situation told ESPN's Ramona Shelburne that Buss became concerned that the situation was escalating after rumors connecting the team to former Grizzlies coach David Fizdale surfaced Friday. The primary owner of the Lakers wants to reassure Walton of the team's commitment to him as coach, now and in the future, sources said.

"Jeanie has always been great," said Walton, who has met with Johnson and says he has received support from the front office as the Lakers continue to rebuild. "There is no doubt that they support me. I haven't seen the tweet, but again, I don't have Twitter. But I know they support [me and the coaching staff]."

This is the second time Buss has tweeted "#InLukeWeTrust" since New Year's Eve.

Walton, Lonzo Ball and Kyle Kuzma all disagreed with LaVar Ball's statements, with Kuzma defending the coach and saying the team stands with Walton. Lonzo Ball said he did not think Walton had "lost" the locker room and that the point guard just wanted to play basketball. The rookie said he does not choose who the coach is and that his father is a grown man who will always express his opinions.

However, there was no statement or comment from the Lakers organization following LaVar Ball's comments made while in Lithuania, where his sons LiAngelo and LaMelo are playing.

The front office did not want to respond to comments made by a parent of a player, even if the Lakers met with the elder Ball earlier in the season to ask him to tone down his previous criticism of Walton and the coaching staff for being too "soft" on the rookie point guard, while also harping on how they were using Lonzo Ball in the fourth quarter.

The previous lack of a response from the organization seemed to feed into speculation about Walton's future. Dallas Mavericks coach Rick Carlisle, president of the coaches' association, called ESPN's reporting of LaVar Ball's comments a disgrace and delivered a spirited defense of Walton on behalf of the coaches around the league. Golden State coach Steve Kerr, Detroit Pistons coach Stan Van Gundy and San Antonio Spurs coach Gregg Popovich also expressed their support for Walton and their disdain for Ball being given a platform to speak his mind.

After their nine-game losing streak, which included a team meeting for players to air out their frustrations, the Lakers (15-27) have not dropped a game since LaVar Ball's comments, beating Atlanta Hawks, Sacramento Kings, San Antonio and now Dallas.

"The guys don't talk about it," Lakers forward Brandon Ingram said of the drama and speculation surrounding Walton. "It is important for us to try to keep it positive in our locker room so we can continue to go on this streak like we have.

"Whatever he is doing right now is working."