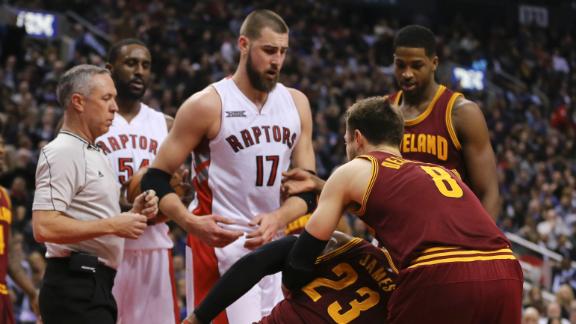 TORONTO -- After being the recipient of a second flagrant foul in his past three games, Cleveland Cavaliers forward LeBron James said he might have to take matters into his own hands in the future.

"Maybe I got to protect myself a little bit more, too," James said after the Cavs' 120-112 win over the Toronto Raptors on Wednesday.

Toronto center Jonas Valanciunas wrapped James up around the neck and shoulders as he drove the lane with 18.8 seconds left in the third quarter. The infraction was initially whistled as a common foul before being upgraded to a flagrant foul 1 after an official's review of the video replay.

"I don't want to get too much involved in it because I don't want to cry about it because it's not like I'm not able to get back up, but it's a lot of plays that are just not basketball plays," said James, who was kicked in the groin Sunday by Houston's James Harden, resulting in a one-game suspension for the Rockets swingman.

"And I've said it before, it's just not basketball plays. But the referees, they take care of it. They decide what [type of foul] it is or not. That's what we got rules for. And for me, I need to maintain my focus and understand how important the game is, but at the same time, protect myself as well."

Cavs coach David Blatt said opposing teams get away with plenty of contact without penalty because of the sheer size of the 6-foot-8, 250-pound James.

"I don't think it's something new," Blatt said. "I think that's something that's been going on for years. And because LeBron is so powerful and so aggressive and so strong, a lot of stuff happens to him that goes either unnoticed or unaddressed. And then there's things that happen that seem to take on less of an impact because it's LeBron James: the powerful, strong, attacking player that he is."

"I thought tonight the refs, well, they reviewed it so there wasn't much choice, but they addressed that foul properly," Blatt said. "I'm not sure all of the fouls that he sustains are necessarily addressed properly."

A reporter asked Blatt whether he believed in retaliation as a proper response by his team to the fouls James has received.

"I'm not going to answer that question," Blatt said. "That's a dangerous question. No disrespect. That's just not a question that I'm going to answer."

"There's time and places that you can get one off," Perkins said when asked whether throwing an elbow would be justified after seeing a teammate harmed. "I feel like you just have to make sure it's the right time. But at the end of the day, you're just trying to go out there and play basketball. It's a physical game, and obviously he was trying to send a message because he'd been getting beat out there on the pick-and-roll. And it happens. But it's just bulls---. That ain't cool."

Valanciunas vowed the foul was not dirty.

"It's a difference between a hard foul and a dirty play," Perkins said. "Obviously that was a dirty play. He was just going to the basket, you wrap him around the neck. That's just ... . We ain't got time for that type of s---, man. They say they're trying to deliver a message, but somebody could really get hurt. You know what I'm saying? I think it was the right call, a flagrant 1, but we just don't have time for that type of s---. That ain't cool."

Valanciunas offered a hand to pick James up off the floor after the foul, which the four-time MVP summarily slapped away.

"Why would I need his help up?" James said. "My teammates will come get me. That's all that matters."

James Jones, who played with James the previous four seasons in Miami, said he's seen this treatment before.

"Absolutely he's a target," Jones said. "You have to understand that he's the game's best player. He makes us go. So, any opponent is going to come in thinking if they can slow him down in some capacity that they can impact our game negatively. So, we know it. We expect it. We've seen it. It doesn't change."

While James is pondering protecting himself moving forward, he has been reluctant to react in the past for a reason.

"You can't," James said. "You understand that the game is more important than trying to deliver a hard foul. At that point, we all know that everyone is looking for the reaction. It's the old elementary schoolhouse rule that the second guy always gets caught. So, you just relax and play the game."

LeBron Tired Of Hard Fouls
Scoop Jackson, Chris Broussard and Freddie Coleman react to Cavaliers forward LeBron James' statement that he may need to protect himself a little more after another hard foul.