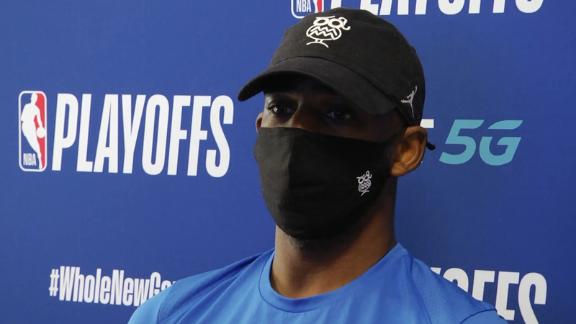 LAKE BUENA VISTA, Fla. -- Following a contentious players' meeting Wednesday that left the NBA bubble on the verge of bursting, LeBron James and Chris Paul led a subcommittee of players who reached out to former President Barack Obama for advice.

The Los Angeles Lakers star, along with his good friend and the president of the National Basketball Players Association, Paul, sought the input of Obama after talks among the players about resuming the season stalled. The league found itself in that predicament after theMilwaukee Bucks chose not to play their first-round playoff game earlier that day -- leaving their opponent, the Orlando Magic, and everyone else on the NBA campus in Florida caught off-guard by the unilateral decision -- in order to protest the shooting of Jacob Blake, a Black man, by police Sunday in Kenosha, Wisconsin.


James, along with many of his Lakers teammates, as well as a group of LA Clippers players, voted against continuing the season, sources told ESPN. It was a moment of frustration for James in particular, sources said, because the 17-year veteran viewed the Bucks' initial move -- while well-intentioned -- as lacking a plan.

Obama was in favor of returning to play once the players seized the moment to work with the league's owners to identify and implement actionable items to effect positive change, sources told ESPN.

Obama's office issued a statement about the meeting Friday: "As an avid basketball fan, President Obama speaks regularly with players and league officials. When asked he was happy to provide advice on Wednesday night to a small group of NBA players seeking to leverage their immense platforms for good after their brave and inspiring strike in the wake of Jacob Blake's shooting. They discussed establishing a social justice committee to ensure that the players' and league's actions this week led to sustained, meaningful engagement on criminal justice and police reform."

Lakers guard Danny Green told reporters during a video conference call Friday that several factors led to emotions boiling over on Wednesday, beyond this James question: If Blake being a victim of police brutality would cause them not to play, then what would occur to cause them to play?

"There's a lot of tension in this bubble," Green said. "We're here without our families. We've been here for two months locked up in a small area. Shouldn't say locked up, but we're confined to a very small radius of things. Guys get a little antsy. Guys let a little tense, emotional. We had some talks, but we took a day or two to try to make very big decisions within a small amount of time, which is tough to do."


James took to Twitter on Thursday to tout two of the initiatives he already has a stake in -- the I Promise School he founded in 2018 in Akron, Ohio, and the More Than a Vote nonprofit organization aimed at stopping voter suppression, which he helped get off the ground in June -- as examples of the type of change that can be achieved with a plan in place, sources said.

By Friday, once players had agreed to resume the season and a call between players and owners had occurred to iron out what further efforts could be committed to, the NBA and NBPA announced three initiatives born of the boycott: the formation of a social justice coalition; a commitment from every city where the league has a franchise to convert team facilities into mass-voting locations; and a creation of public service announcements, to be aired by the league's network partners during every playoff game, aimed at promoting civic engagement in local and national elections and raising awareness about voter access and opportunity.

"It took a minute, but everyone got organized and locked in on how to make this matter," a source familiar with the players' process told ESPN.

Green said Lakers guard JR Smith reminded his teammates to register to vote before they took the court for practice Friday.

"JR was like, 'Is everybody here registered? Is everybody registered to vote?'" Green said. "We were like, 'Yeah, we got everything in place for our team.' [Now we need to] make sure every team gets in line and make sure they put it out to their players and get them registered to their respective cities."


James' More Than a Vote organization issued a statement shortly after the league announced its three-pronged plan to effect change once games returned.

"We stand ready to support the NBPA's and NBA's effort to convert every NBA arena possible into [a] polling location for this fall's election. More Than A Vote has been laser-focused on this for months -- creating new opportunities in cities like Atlanta, Cleveland, Detroit, and Los Angeles among others -- and welcomes the comprehensive effort to provide a safe in-person voting option for our communities during this pandemic that is disproportionately killing Black people," it read, in part.

"We know that voting will not end our pain. Voting cannot bring back those killed by the police officers sworn to protect us. Voting cannot erase the scars of slavery and segregation. It cannot change our history, but it can change our future.

Chris Paul reflects on his conversation with Jacob Blake's father
Chris Paul speaks on the importance of coming together as a league in deciding to return, and how emotional it was to talk to Jacob Blake's father.
Report a correction or typo
Related topics:
sportsespnnewsla clippersnbachris paullos angeles lakerslebron james
Copyright © 2021 ESPN Internet Ventures. All rights reserved.
More Videos
From CNN Newsource affiliates
TOP STORIES