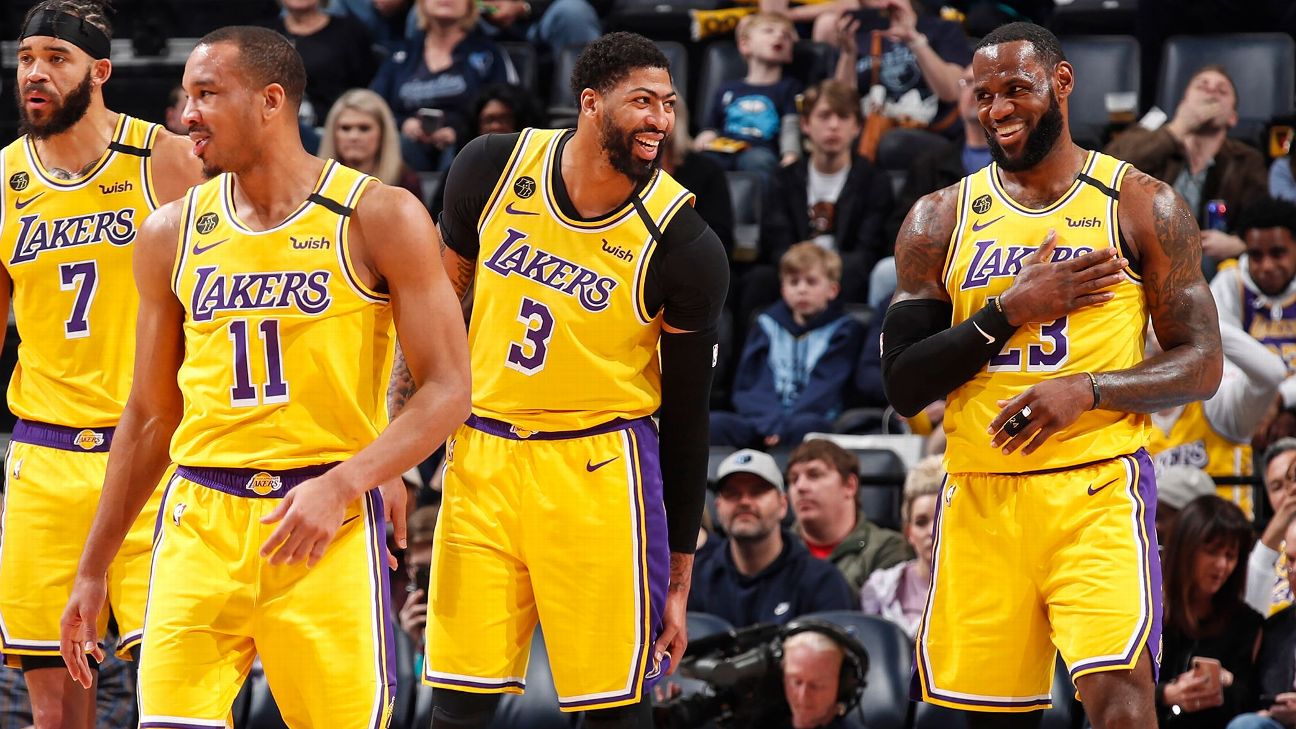 HE WILL LIKELY have his number retired in Miami, deserves a statue in Cleveland and has left an indelible mark on Team USA. But now, 17 years in and past his 35th birthday, the word "Lakers" across LeBron James' chest seems to have inspired a transformation.

James has embraced playing a position, point guard, he'd previously shunned. He has reversed an in-season strategy of a slow, and sometimes sluggish, buildup to the postseason -- a technique developed during an eight-year run of Finals appearances -- to one complete with postseason-level defensive effort well before Christmas. And he has done it with public and full support of his team, abandoning past approaches of occasionally bullying his way to roster moves.

James, the Laker, has become bonded to his team's front office and ownership like never before in his career.

Simply, this is not the James we've come to know.

THE BUSS FAMILY has a long history of deep connections with star players. Perhaps no owner and star were closer than Magic Johnson and Dr. Jerry Buss. The family's relationship with Kobe Bryant, even with its rough patches, was a 20-year success story.

And the same talent has been passed down to current controlling owner Jeanie Buss. Those close to James describe his relationship with Jeanie and her lead executive, Linda Rambis, as the most connected he has been with ownership in his career. Though he has been with the team for less than two years, unexpected turbulence has brought them together -- a diametric shift from situations in James' past.

In October, when the Lakers found themselves in the midst of a geopolitical quagmire between the NBA and China, franchise leadership and James leaned on each other. He served not only as a guiding voice with his teammates as they holed up in their Shanghai hotel but also with Adam Silver when the commissioner arrived. In a crucial meeting with players and Silver, James advocated for players to be protected from having to speak for the league on the sensitive situation while working toward a path to save two Lakers-Nets preseason games.

Then, in the wake of Bryant's death, James worked alongside Buss and general manager Rob Pelinka to help manage his teammates in the emotional days. While Buss and Pelinka provided support to the Bryant family, James connected with team members, and then Silver directly, as he pushed for the postponement of a game against the LA Clippers because he didn't believe the team was emotionally ready to play.

Some of the roots of this alignment can be traced back to last season, when Johnson's resignation shook the franchise. The Lakers subsequently failed to land their top head-coaching choice to replace Luke Walton -- including an inability to close a deal with Tyronn Lue, whom James later said he would have been "ecstatic" to play for again. And that followed Johnson ripping Pelinka on national television just days before the start of a vital free-agency period.

Through all of the Lakers' self-inflicted drama, James remained silent -- not even a passive-aggressive grumble on social media -- as he gave the team space to work through the situation. James has sounded off in the past for far less significant organizational setbacks than these. He was frustrated, even angry, about these events, sources said, but his support didn't waver. The message that came from James' camp throughout the ordeal reflected only support for Buss and Pelinka.

James' faith was rewarded when the Lakers executed a trade for Anthony Davis, beginning a turnaround that has led them to the top of the Western Conference standings.

"At the end of the day for Jeanie and Rob and everybody upstairs, I was just supportive of whatever moves that they were making," James said in September, breaking his monthslong silence.

The last time he'd seen such offseason drama was in Cleveland in 2017, when general manager David Griffin left and then Kyrie Irving demanded to be traded. James tweeted supportof Griffin that season, and he made it clear behind the scenes that he was not on the same page as management and that he didn't want Irving traded.

The same month Griffin left, James declined to commit to the franchise long term, setting the stage for his eventual departure. But James' support for the Lakers two summers later set up the comfort zone he and the team are currently enjoying.

PELINKA HAS A long history of managing stars. He has more than two decades of experience as an agent and represented more than a dozen top-10 draft picks. He long ago learned how to manage relationships with demanding players. In this spirit, Pelinka made the decision to make James, and then Davis, an active part of the roster-building process.

"Both of their input, Anthony's and LeBron's, has been incredibly valuable to me," Pelinka said after the Lakers signed seven new players and re-signed four players this past offseason. "We view our relationships here with our star players as partnerships."

Pelinka, of course, isn't the first executive to operate this way with James, who has been consulted on roster moves as far back as his second season in the league. But for now at least, James has bought into the role -- and bought into Pelinka.

He has given Pelinka two votes of confidence this season: The first came when he voiced support for the GM's promotion and contract extension; and second, heading into the trade deadline, to remove front-office pressure by declaring "we have enough right now" to win the title.

The Lakers still attempted to make trades -- for example, sources said, they had discussions with the Detroit Pistons focused on Derrick Rose -- and they were active in the buyout market. But James' open support of the roster signaled a strong deviation from actions past.

In 2017, he blasted the Cavs' roster as "top-heavy as s---" and hoped "that we're not satisfied as an organization," in an effort to force changes before the trade deadline. Note: That was a Cavs team that had won a championship with a front office that had repeatedly proven its aptitude, which included trading for sharpshooter Kyle Korver just three weeks prior.

THE DAY FRANK Vogel was hired -- as the third-choice candidate -- the new Lakers' coach had to sit through a difficult news conference, which James attended in a show of support, as Pelinka deflected questions about Johnson.

In contrast, when he started playing for Heat coach Erik Spoelstra in 2010, a disillusioned James asked Pat Riley if he had interest in returning to coach the Heat. When James came back to Cleveland and signed with the Cavs in 2014, James didn't meet with new coach David Blatt for more than a month and interrupted the first day of practice to call a players-only meeting to assign roles before Blatt could. While last season's experience with Walton wasn't as rocky, sources said they were never on the same page.

This season, James has not only backed Vogel, he has backed the plan to play almost exclusively at point guard -- something James fully opposed by the time he left Cleveland because of the toll it took on him over the course of a season.

"I love Coach, and what the coaching staff are doing," James said after Vogel won Coach of the Month in November. "I think he's doing what's best for the team, and obviously I respect that."

There are motivations to all of this. Last season, James requested more ball handlers on the roster to ease his workload. The desire contributed to a failed, 37-win season. Thus, he had reason to support the radical shift to shoulder more lead guard responsibilities.

Maintaining a close relationship with Buss and Pelinka also helps ensure James remains a Laker. It's unfathomable to consider he would be traded, but James doesn't enjoy the same leverage he did in Cleveland, when renewing short-term deals annually helped him maintain control. With L.A., James has two years remaining with a third-year player option on his contract and is without a no-trade clause.

Perhaps the most important factor in this entire strategy, though, is James' belief in himself. He was a leader,with agent Rich Paul, in the long process to get Davis to Los Angeles. After helping recruit Davis to join Paul's agency, Paul executed Davis' trade demand in New Orleans and then helped guide him to the Lakers when the agent publicly warned other suitors -- like the Boston Celtics-- that Davis was unlikely to re-sign if they dealt for him.

James was also sure he'd return to MVP form after playing an injury-shortened 55 games last season -- that, of course, has been the biggest factor in the Lakers' turnaround. Beyond the good feelings and positive vibes, the franchise showing the same belief with a massive bet-on-the-present trade to his preferred co-star has paved the way for this feel-good year.

Nonetheless, many times during his career James has operated like an independent contractor. There have been celebrations of group success, spectacular parties and deep, tearful hugs. But time and again, in the end there was only his tiny cadre of lifelong friends and family, with loyalties to teammates and franchises marginalized.

This is not to say his Lakers experience won't ultimately end in the same way. But that's not the way it feels now. As a Laker, James is in lockstep with a team like never before. And that has been an unexpected chapter from a man who has been authoring, for so long now, the story of his career. 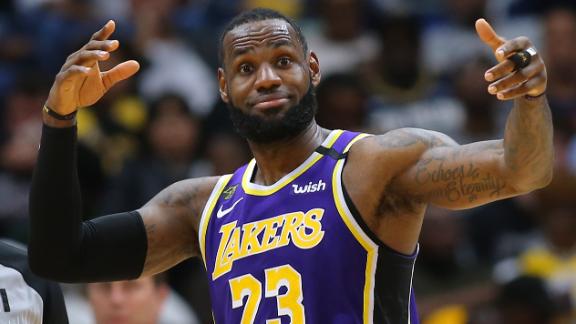 How LeBron has re-imagined his career
Brian Windhorst details what has changed and how LeBron James has evolved throughout his 17-year career. 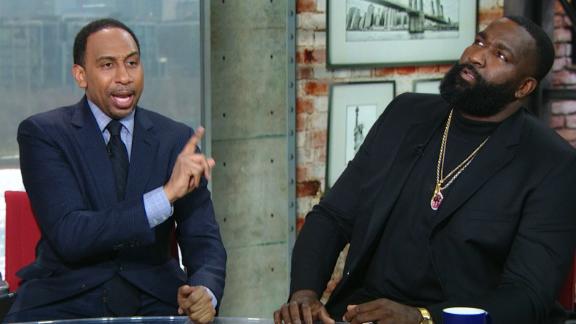