Lonzo Ball on brother's arrest: Family 'in China taking care of it' 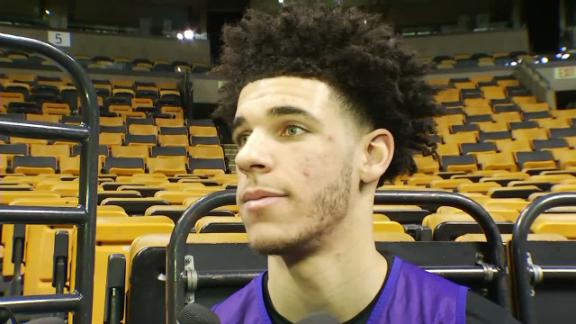 BOSTON -- Los Angeles Lakers rookie Lonzo Ball says he has not yet spoken to his family, including his brother,UCLA freshman LiAngelo Ball, who was released on bail in Hangzhou, China, after being arrested for allegedly shoplifting Tuesday afternoon.

"No, I haven't talked to any of them yet," Lonzo Ball said after the Lakers' shootaround on Wednesday morning. "I know they are all over there in China taking care of it, so I will talk to them when they get back."

Ball's younger brother LiAngelo and freshmen Cody Riley and Jalen Hillwere questioned by Chinese authorities about allegedly stealing sunglasses from a Louis Vuitton store close to the UCLA team hotel in Hangzhou, where the Bruins were staying before leaving for Shanghai on Wednesday.

Ball's father, LaVar, and mother, Tina, and youngest brother, LaMelo, are in China for UCLA's game against Georgia Tech. LaVar Ball released a statement on the allegations, saying "it is a very unfortunate situation that the Ball family and UCLA has to deal with at this particular time. We will comment shortly."

In an earlier video interview with ESPN's Arash Markazi, though, a subdued LaVar Ball clearly looked concerned and even a little shaken despite trying to paint the picture that the situation wasn't "that big of a deal."

"He'll be fine," LaVar Ball said. "He'll be fine. Everybody making it a big deal. It ain't that big of a deal."

Lonzo Ball said the situation was not a distraction for him as he prepares to play Kyrie Irving and the Boston Celtics in his 11th game as a pro.

"I am just trying to focus on the game," the Lakers point guard said. "I am letting my people over there handle it. I am over here taking care of business. I haven't talked to any of them."