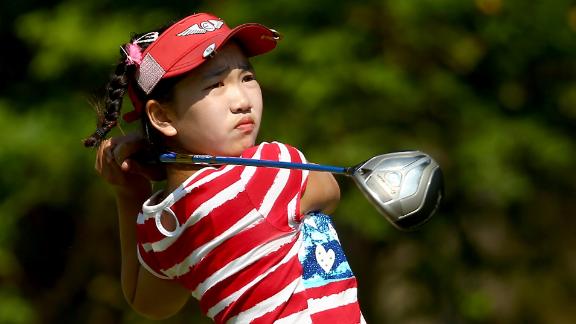 PINEHURST, N.C. -- Lucy Li showed her age only when she finished her historic round Thursday at the U.S. Women's Open.

Just like any 11-year-old, she went straight for an ice cream.

The youngest qualifier ever at the Women's Open played a grown-up game at Pinehurst No. 2, except for three holes that made her 8-over 78 look a lot worse than it was and stretched the odds of her becoming the youngest player to make the cut.

"She looks 11. She doesn't talk 11. And she doesn't hit the ball like she's 11," said Catherine O'Donnell, who played with her in a sun-baked opening round on a course that only four days ago hosted the men's U.S. Open.

The sixth-grader from the Bay Area was the star attraction, right down to her Stars & Stripes outfit to celebrate the occasion. She wore a mid-drift shirt patterned after the American flag, with a similar motif for a skirt, complete with silver stars that matched the color of her braces.

Li wound up 11 shots behind leader Stacy Lewis, the No. 1 player in the world who opened with a 67. But one moment was telling.

The kid made a 7-foot birdie putt on the par-5 fifth hole and headed to the next tee, her braided pigtails swinging with each step. The media and a large gallery followed her right past the adjacent green, where hardly anyone noticed Lewis making her way around Pinehurst with no bogeys.

Only this was more than just a sideshow.

Li missed only one fairway -- by less than a yard. Even though she hit fairway metals into half of the holes, she rarely got out of position. Now if she could only take back three shots that led to big numbers.

There is a lot of golf left to play, but recent history should give Li some hope for making the cut. The highest first-round score by a player who made the cut at last year's U.S. Women's Open was 78. Less encouraging for Li is the fact that 33 players have shot 78 in the first round in the last two U.S. Women's Opens and three of them made the cut, according to ESPN Stats & Information.

Li had the same score as O'Donnell, Natalie Gulbis and Jessica Korda, a two-time winner on the LPGA Tour this year. There already were 11 rounds in the 80s.

Perhaps most remarkable about her round, besides the 13 pars and two birdies, was how she bounced back from mistakes.

"That's what I was so happy about in my round," she said. "Because after I got doubles and triples, I was able to get it back. Like I made a good stretch of holes after the double on the first hole. And after the triple, I birdied No. 5. And I got a lot of pars after that."

Li left a tough angle for her third shot on the par-5 10th hole and came up short and into a bunker. The sand shot looked reasonable until it kept rolling off the back of the green. She chipped with her wedge (a pink shaft) to about 8 feet and missed the putt to take double-bogey.

Another double-bogey came on the 450-yard 16th hole when her fairway metal went into a bunker some 20 yards short of an elevated green, leaving a shot so hard even the best men would have a tough time. Her bunker shot was not strong enough, and she wound up missing a 7-foot bogey putt.

Asked to have one swing back, it would be the wedge on the short third hole. She went left of the flag, and it trickled off the turtleback green -- the signature of this Donald Ross course -- and into a bunker. She blasted out over the green, chipped on to 18 feet and three-putted for triple-bogey.

But she made a pair of smooth birdies -- a 6-iron to 15 feet on No. 1, and a wedge to a right pin position on the fifth hole -- along with some tough par saves. The best came at the 426-yard eighth hole, when her 5-wood from 198 yards went long and over a steep slope right of the green. She lofted a pitch perfectly, and it rolled 6 feet by the cup. This is the same hole where John Daly putted off the green so many times in 1999 that he whacked the ball with his putter when it was still moving and rang up an 11.

"Give her that shot again and she can't do that another 50 times, probably," O'Donnell said.

Along the way in a 5½-hour round, Li often plopped to the ground in the shade and sat until it was time to hit, one time munching from a cup of fruit.

"I normally sit down even more than that," she said, giggling as always.

Kaymer last week used putter exclusively when he was just off the green. Li chose to chip because that's what made her more comfortable. She won the driving and chipping portion of the Drive, Chip & Putt Championship two months ago at Augusta National.

That was for kids. This is for grown-ups. She fit in just fine.

"She's so much more mature than I could possibly imagine," said Jessica Wallace, the other player in their group. "She's a lot better than people thought. She's very capable on this golf course. She played like she belongs out here. And it was a real pleasure."

The youngest player to make the cut was 13-year-old Marlene Bauer, who tied for 14th in 1947. That was the second U.S. Women's Open, and Baeur -- whose married name was Hagge -- became one of the founders of the LPGA Tour.

It was a long day for Lucy Li, and part of her was glad it was over. She also was looking forward to another chance Friday.

And what will she do in the meantime?