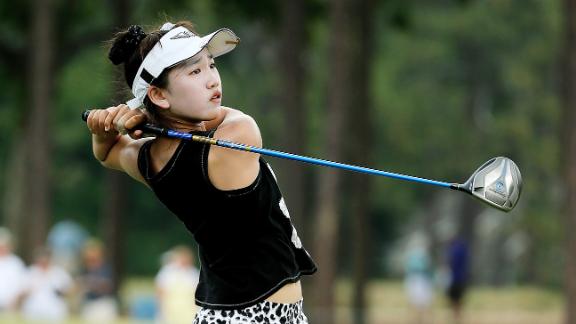 The 11-year-old opened with a double-bogey for the second straight day and wound up with another 78 to finish at 16-over par, well beyond the cut line, Friday at Pinehurst No. 2.

Despite the outcome, it was a remarkable week for Li, who made quite an impression at Pinehurst -- even if she didn't make it to the weekend.

According to her caddie, this week was never about her score.

"She was here for the experience and the opportunity to play with the best players in the world," caddie Bryan Bush said. "She proved that she can."

Li was 22 strokes behind leader Michelle Wie and 19 behind Lexi Thompson, who both know about playing the Women's Open at a young age.

"I hope she's having a blast out there," Wie said.

All eyes were on the pre-teen from the Bay Area who showed a beyond-her-years knack for bouncing back from mistakes and rough holes.

Li's tee shot on 13 landed in some thick weeds, and she missed the ball when she tried to punch it out. After a brief chat with USGA President Tom O'Toole, she took a drop and her shot from that rough ricocheted off the green and near the seating area.

After she chipped to about 15 feet, she pushed that putt wide right and tapped in for her second triple-bogey of the tournament.

She came back strong: Li birdied the 14th -- her favorite moment of the tournament -- and closed her round with pars on three of her final four holes to match her opening-round score.

"I'm really happy with how I bounced back from the big numbers," Li said.

Li Misses Cut As Wie Grabs Lead
Lucy Li's historic week at the U.S. Open came to an end as she finished the second round with another 78, while Michelle Wie closed with two birdies for a second straight 2-under 68.

Li's Historic Run Comes To An End
Eleven-year-old Lucy Li talks with Michael Collins about her historic week as the youngest qualifier in U.S. Women's Open history, finishing 16 over par.