ESPN
By Baxter Holmes and Jovan Buha
LOS ANGELES -- After two of his players were ejected in a third-quarter skirmish with Milwaukee Bucks players in Friday's 107-103 loss at Staples Center, Los Angeles Lakers coach Luke Walton harshly criticized the officials and alleged that a Bucks employee involved in the on-court scuffle "put his hands" on one of the Lakers players.

"Don't touch my damn players," Walton said, in part, "because if that's OK, I'm sure we can find a couple people here in L.A. that want that job working for the Lakers, too. That's not right."

The scuffle erupted in the third quarter when Lakers guard Nick Young was fouled hard on a drive to the rim by Bucks guard Malcolm Brogdon. Young pushed Brogdon, then Bucks center Greg Monroe became involved, as did Lakers swingman Brandon Ingram.

Several other players joined in the scrum, which had to be broken up by the officials. Play was halted for several minutes while the officials conferred before ultimately ejecting Young, Monroe and Lakers guard D'Angelo Russell.

"Obviously, I don't want anyone to throw punches or get hurt," Walton began in a lengthy postgame remark that probably will draw attention from league officials. "I just watched [the replay]. I'm going to need an explanation on it because it made no sense to me. They told me that D'Angelo got kicked out for escalating the situation. But D'Angelo only responded after Monroe had grabbed Nick by the neck and thrown him. If D'Angelo didn't push him, I would've been pissed off at D'Angelo. He did the right thing.

"So for the NBA to say that the two of them did the same thing and just canceled each other out is absolute crap to me because D'Angelo just shoved [Monroe] in the back; Monroe grabbed [Young] by the neck. I don't know if he was mad that [Ivica] Zubac was kicking his butt all night long out there. But you grab someone by the neck? That's not right. And then Monroe went and slapped Brandon in the face. So he did all that and he got the same penalty as when D'Angelo did it for shoving someone in the back that was a teammate. So that's crap to me."

Walton then claimed that a Bucks employee became involved in the scuffle.

"And then watching the tape, one of their employees is on the floor, and he grabs Brandon by the jersey and shoves him -- not holding him back, shoves him -- and that doesn't get addressed either?" Walton asked. "If there's nothing wrong with that, then I have no problem finding some people to hire on our staff.

"The next time we get in a skirmish, I'll keep all my players back because the fact that they don't get in trouble for that, the refs don't say anything about that, and he puts his hands on one of our players? He works for them. He can touch their players all he wants."

Said Ingram: "I know there's security around, but I've never seen that before. It's whatever."

After the game, Ingram received a tweet apparently from a Bucks fan who said, "I wouldn't try picking a fight with [Monroe] again. He was about to give you the work."

Ingram replied, "Yea I doubt it cuz. He got off [though]."

Monroe left without speaking to reporters.

"I love the way the young guys stepped up for me," Young said. "As a team, the whole coaching staff, players, we've got each other's backs. That's unity. That's a team."

Nance added of the event, "It brings you closer as a team. It lets you know that if you're out there, I've got your back no matter what. Obviously, you never want to see anybody lose any money, never want to see any fights on the basketball court, but when something like that does happen, it's good to see everybody come together to protect our guy."

With the loss, the Lakers were officially eliminated from postseason contention for the fourth consecutive season, extending their franchise-long playoff drought. Before this stretch, the Lakers had never missed the playoffs for more than two straight seasons. 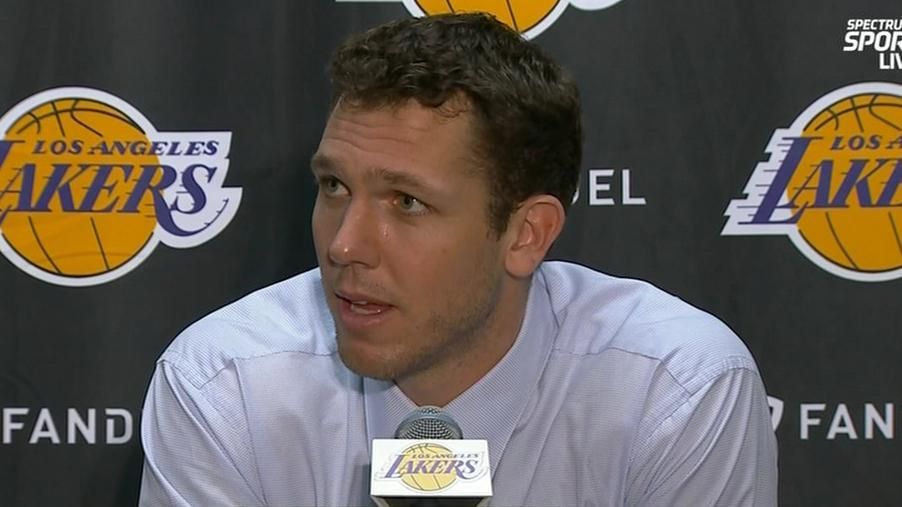 Walton rips refs for handling of scuffle
Lakers head coach Luke Walton feels the officials unfairly punished his players during their on-court scuffle with the Bucks.