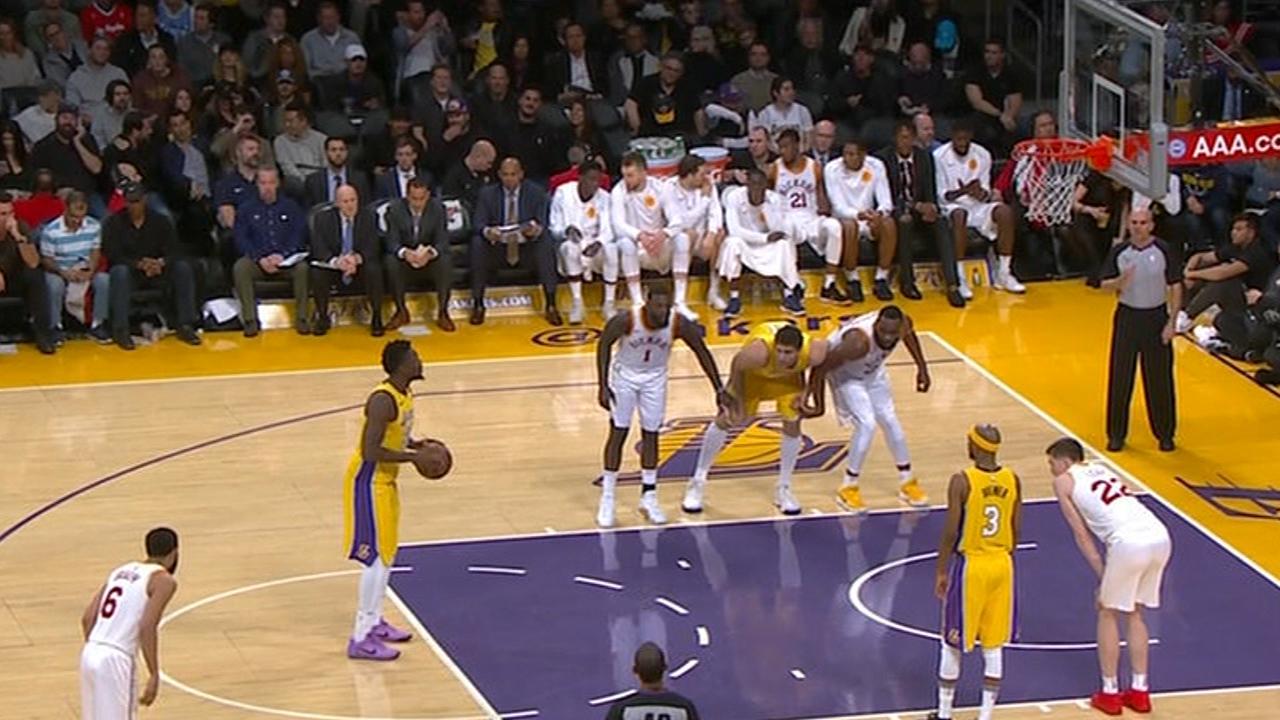 The Lakers were a hideous 2 of 14 from the line in their 99-86 win over the Indiana Pacers. That 14.3 percentage was the lowest by any team in NBA history (minimum 10 attempts), according to Elias Sports Bureau.

"Man, that free throw line, it's like a virus or something," said guard Jordan Clarkson, the only Laker to make free throws Friday.

The Lakers are by far the worst team in the NBA in free throw shooting, with their 68.8 percent clip below the Oklahoma City Thunder (70.6) entering Saturday. No current Lakers player is shooting better than 76 percent from the line.

"Snowball effect? I don't know," forward Larry Nance Jr. said when asked to explain the Lakers' futility at the line. "It was crazy. Isn't that like a record or something? Good for us."

"Speaking strictly for myself, I am shooting the worst that I have in like three years (61 percent). It is not saying much, but it is not for a lack of practice. I am in here shooting free throws every single day. I don't know what it is. Probably got some kind of mental block as a team going on."

Walton has had the team go through monthly meditation sessions with Andy Puddicombe, co-founder of a meditation and mindfulness app company Headspace. Phil Jackson used the app and had Puddicombe work with the New York Knicks during part of his tenure as team president in New York. The app guides users through sessions that can be as short as three minutes.

Puddicombe has visited the Lakers' film room on a game day, dimming the lights and conducting a 15-minute meditation session with the players attempting to fall into a state of relaxation in their plush chairs. The goal is for players to train their mental game by concentrating on eight areas -- motivation, focus, training, competition, communication, analysis, recovery and rehabilitation -- in an effort to get them in a state where they are relaxed but also an active state of readiness on game day.

"When we focus on something too much, or overthink it, then we tend to create tension, both in our mind and in our game," Puddicombe said on Saturday. "Nowhere is this more obvious than on the free-throw line. Meditation will unquestionably help players step out of that thinking pattern, and get more comfortable shooting from the line, but only if they practice it regularly and apply it in a game time environment.

"At this level, mental training is everything. My hope is that the younger players coming through will understand this and follow in the footsteps of Jordan, Kobe, Shaq and the like, in making meditation an essential part of their training regime."

Walton is a big believer in meditation. He did it under Jackson as a player and practices it regularly today. The Lakers coach wanted his team to practice mindfulness to help not just unlock its potential but also help players deal with daily pressures such as social media.

"It is very confusing," Walton said of his team's free-throw shooting. "Free throws are more mental than anything. We talk about it, we work on it. Then I try to not talk about it, let it just happen naturally. I think we got up over 70 (percent) as a team before last night, but it kills us. It hurts us. It's hurt us in a lot of games this year. But like everything else, hard work and confidence is normally the way to fix things. ... They're all very capable free throw shooters, so it's not like they don't have the skill to knock them down. We just have to clear our minds and take it for what it is, which is just one shot at a time and step up there and knock it down.

"I was thinking about having (Puddicombe) try to focus on some sort of relaxing mechanism while you step up to the line, but we haven't brought in anyone (experts) yet. ... Meditation is very hard. We're gonna keep doing it in hopes that some of the young guys can pick it up and get into it."

Walton is hoping the next appointment with Puddicombe in February, after a grueling five-game road trip, will help the team somehow with its awful foul shooting.

"We tend to only struggle in our minds when we are either thinking back and going over and over on things we aren't happy with or when we are thinking forward kind of either worried of how things will turn out or hoping they will turn out a certain way," Puddicombe said of the outside pressures younger athletes can face and the short attention span that this multitasking generation can have impacting their performance.

"If we can just kind of be present in the here and now, then we lose a lot of that struggle in the mind and then we are not thinking about what is going on elsewhere or what other people are saying ... we are really present and focused with what we are doing. So that is the most important tool or benefit that they are getting."

Walton understands that not all the young Lakers have adapted to meditation yet, but he's hopeful more Lakers will see its benefits.

"There's always guys that aren't going to understand it and like it, but if we can get two, three, four, five of the guys to embrace it," Walton said. "I'm a big believer in you train your muscles in the weight room, you train your skills out here on the court.

"Your mind is like a muscle, it can be trained. It needs work, it needs quiet time, especially in today's world that we live in with social media and constant stimulation to your phone all day. It's important for guys to understand you can train your mind to gain an advantage in this sport that we play." 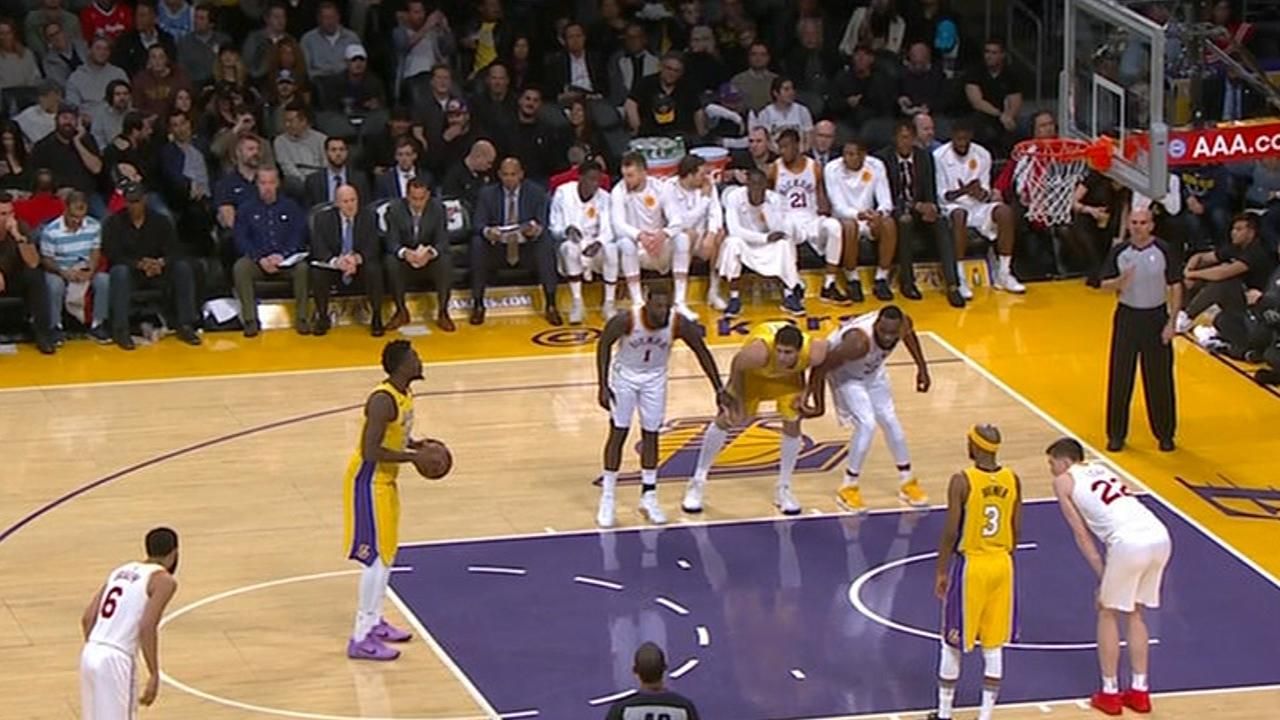