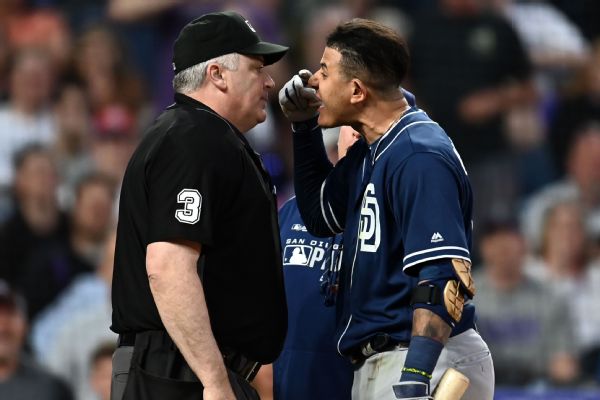 "I've just never seen anyone get suspended for arguing balls and strikes, so we'll see what happens,'' Machado said before Monday night's game with Milwaukee.

MLB said the punishment, imposed by chief baseball officer Joe Torre, was for "aggressively arguing and making contact'' with Welke.

Asked if he made contact, Machado said: "Not that I believe, so no, but everyone has their own right to write what they want. We have our case and we're going to wait to see what the appeal comes back with. We always have the right to argue balls and strikes and give our opinion on it.

"You could see the video. I mean, I was right the whole way. There's video for it.''

The third baseman had two hits and scored twice before being ejected by Welke in the fifth inning Saturday night at Colorado after a called third strike.

Asked if Welke indicated at the time that there was contact, Machado said: "He pointed but I was way too into the zone on letting him hear what I had to say on what I thought about the whole call. I didn't touch him. I didn't think I touched him. Video says it all. ... I think we've got a good case. I don't think anyone's ever gotten suspended a game for arguing balls and strikes. I think that's a little too much, a little unjustified, but there's a process to this and we're going to go through it.''

Padres manager Andy Green, who was ejected an inning after Machado was tossed, declined comment. "I'll hold my thoughts to myself,'' he said.

Machado's ejection forced the Padres to use rookie sensation Fernando Tatis Jr., who was supposed to get the night off. The Padres lost, 14-8.

"In Manny's case, he was ejected the last time in 2016,'' Green said. "This isn't a habit. This is not who he is consistently. If we were running into an issue with any of the guys were getting ejected, they're not on the field of play, he knows what his impact is for us. There are moments you have to allow that opportunity to let out some frustration, back a guy up because you love his passion. ... That guy was so locked into winning baseball games and series. He has been all year. You could feel like he was not letting the guys on the team quit no matter how many runs we got down."

Machado homered three times and drove in six runs in the series.

"Manny's passion was there all series long, leading us to victory, and if there's a moment like that from time to time, I can live with it,'' Green said.