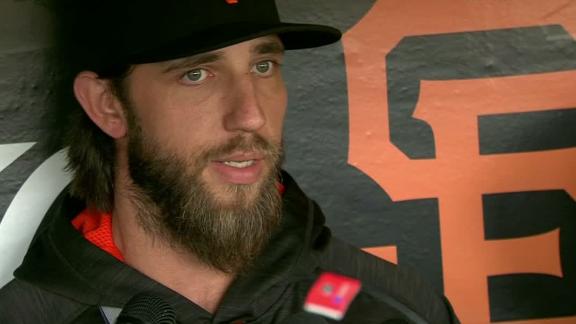 SAN FRANCISCO -- Madison Bumgarner had nearly finished a ride of more than two hours in the mountains outside Denver when his rented dirt bike slipped on the trail and took the pitcher to the ground directly onto his pitching shoulder.

The 2014 World Series MVP bruised ribs and sprained the AC joint in his pitching shoulder in the dirt bike accident during Thursday's off day in Colorado. An experienced rider, Bumgarner said he was with two family members, not speeding or racing the bike, and wearing a helmet when he spun out. He doesn't think he hit a rock or other obstruction. The ground wasn't icy or snowy, and he said he wasn't doing hills.

He called San Francisco Giantshead athletic trainer Dave Groeschner and went to the emergency room once back in Denver.

"It's terrible. Obviously that was not my intentions when I set out to enjoy the off day. I realize that's definitely not the most responsible decision I've made," Bumgarner said Monday in his first public comments about the accident. "It sucks not being able to be out here with my guys and try to help us win some games. It's just very unfortunate. I've talked to a lot [of] them. They know where I'm at, and everybody's been super supportive, too -- the organization, the guys, everything."

Bumgarner had a protective sling on his pitching arm as he sat in the dugout, and he likely will wear it for another week to 10 days, Groeschner said. Bumgarner was scheduled to have another MRI exam later in the evening and be checked by Dr. Ken Akizuki, who also examined Bumgarner on Sunday and "was pretty happy with the structure of it."

While the 27-year-old left-hander doesn't believe there is structural damage in the shoulder, he didn't want to speak prematurely about how long he might be sidelined, whether he will need surgery or about his prospects of being able to pitch again this season.

"It's hard to put a timetable on it, but I would certainly be disappointed if I wasn't," he said. He would have to rehab on a throwing program and build back up.

In 2014, Bumgarner produced one of the best postseasons ever by a pitcher.

He threw 270 innings, including 21 in a World Series that went the distance against the fellow wild-card Kansas City Royalsas the Giants captured their third championship in five years. On two days' rest in Game 7 at Kansas City, he pitched five scoreless innings of relief in a 3-2 win. He tossed a record 52 postseason innings.

So, everyone thought he was indestructible, right?

"Yeah, well, unfortunately not this time," he said Monday. "I wish that was the case."

"Yeah, I think there's quite a bit of stuff in there, but that's probably not the first time I've made a stupid decision. We are human," Bumgarner said. "Honestly, I think it's pretty much anything non-baseball related in everyday life. But I don't have it front of me. I couldn't give you an exact description."

He said Giants CEO Larry Baer, general manager Bobby Evans and manager Bruce Bochy all have been supportive, and that he hasn't been told he faces discipline.

"Boch came to see me. Then I talked to Bobby and Larry, and they honestly couldn't have been nicer to me or more caring than they were," Bumgarner said. "I was expecting the worst, and rightfully so. The team and the front office and everybody have been super encouraging about it and positive and have been really good to me throughout this process so far."

Bochy called his ace "remorseful," and the pitcher said he has spoken to almost everybody either individually or in small groups about how upset he is having put the team in this situation. Bumgarner is 0-3 with a 3.00 ERA in four 2017 starts and has received only five runs of support -- two on his own home runs -- but said he wasn't trying to blow off steam or frustration by getting away before the weekend series with the Colorado Rockies.

"Bum's in a better place right now," Bochy said. "He was pretty beat up the first day when I saw him but he's walking around and his spirits are better. I think he feels a lot better about his situation now. Of course the first day you're wondering, 'How bad is it?' He seems to be doing well."