Magic Johnson: Lakers to consult with LeBron James on moves 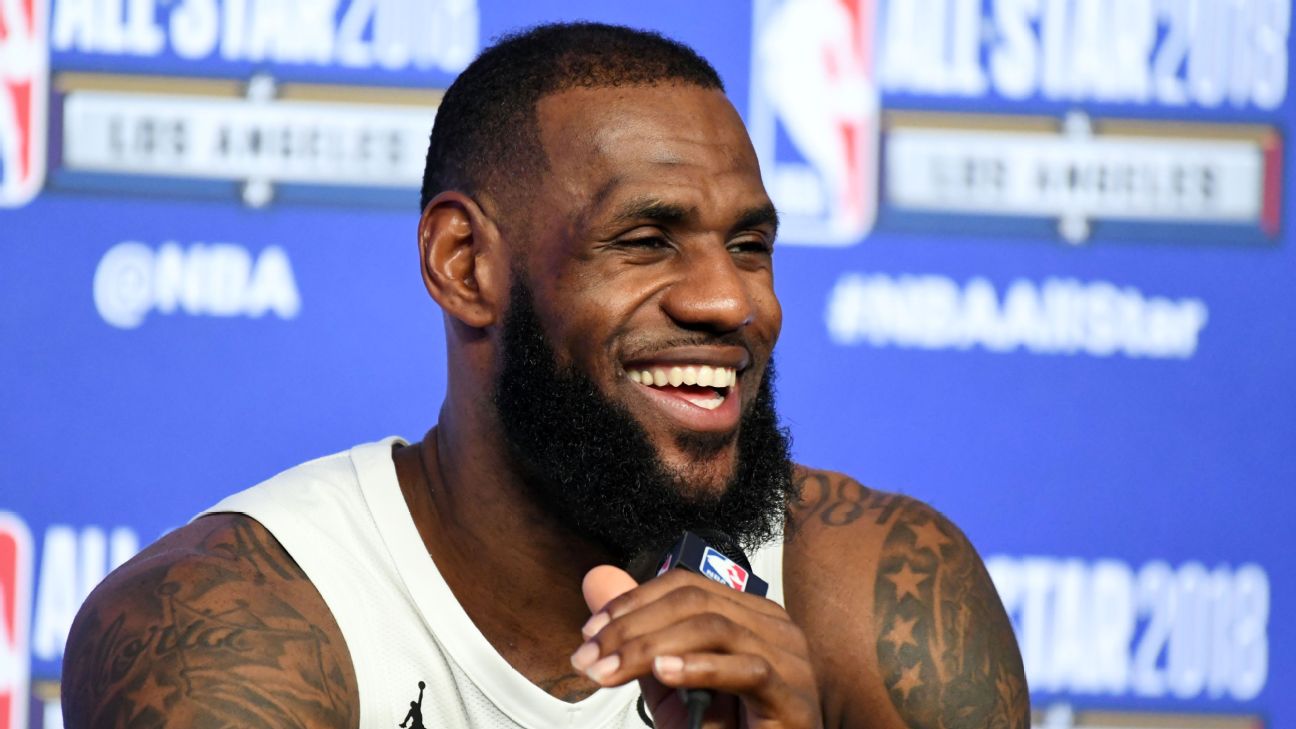 Magic Johnson says LeBron James' arrival has taken the Los Angeles Lakers' three-year rebuilding plan to "a whole 'nother level" and that the team plans to remain disciplined and maintain salary-cap space to pursue another max free agent next summer.

The Lakers president of basketball operations said the team's rebuilding timetable remains on track to take another significant step next season.

"If we feel there's somebody out there or a deal to be made to make our team better, then we'll do it as long as it's a great deal for us," Johnson said during a conference call Friday. "If it's not, we have our team and we'll go to battle, go to war with this team. We feel really good about this team.

"Then we'll have enough room for next summer to give another player a max deal. [General manager] Rob [Pelinka] and I, we already put the strategy together. LeBron, of course, changed some of that, but we're still going to stay disciplined and hope we'll be a team that can have a championship run for a long time."

Calling him the "greatest player" and "greatest leader in sports," Johnson said the Lakers will lean on James and consult with him when contemplating new additions.

"It's not about influence. It's about sitting down with the world's greatest player and picking his brain and saying, 'You're playing in the game today,'" Johnson said. "Just like when I was playing, [late owner] Dr. [Jerry] Buss and [former Lakers GM] Jerry West would come to me when we were thinking about making moves. ... It's gonna be the same way here. We're gonna go to LeBron and say if there's a deal to be made for guys available, we'll say to him, 'What do you think about this guy? You know him. You play against him. You know the backstory and everything about the guy.'

"That's why you have guys that are superstars in this league. You want to have a line of communication and want to know what they're thinking. LeBron, we've done that with the guys we brought in. He's done an excellent job of giving us great feedback. We will continue to do that. The ultimate decision-maker on the team and who we bring in is me. I take that to [Lakers president] Jeanie [Buss] and see what she says and whether she signs off or not."

While Johnson is confident about the pieces added around James, he did say it could take "probably closer to two months" for James, Rajon Rondo, Lance Stephenson and JaVale McGee to learn how to play alongside Brandon Ingram, Kyle Kuzma, Lonzo Ball, Josh Hart and Kentavious Caldwell-Pope -- a core that went 35-47 last season.

"I think one thing that we have to, and the fans have to be patient about, is the chemistry on the court," Johnson said. "Because we're putting together, basically all these guys will be new to each other, playing with each other, right? So it's probably going to take us at least a month or two, probably closer to two months, to really understand how to play with each other and how to feed each other, all those things.

"We saw that LeBron and Miami struggled for the first two months or so when he was in Miami, then they finally got together and they were a championship-caliber team. And I'm sure when he went back to Cleveland in the beginning, they struggled until they got to know each other and then they were a championship-caliber team. It will be no different here. We'll struggle to understand how to play with each other and where everybody likes the ball and those types of things, but eventually we'll get it together and I feel we'll be one of the best teams in the West."

Johnson said he studied film of James at every significant stage of his career -- from his early Cleveland days to the Miami championships and back to Cleveland -- to help him prepare for his July 1 meeting with James, understand where his game is currently and figure out how to best design the Lakers' roster around the star.

He also watched how Houston and Boston had success in the postseason. Johnson said he and James were in agreement that adding multiple playmakers and defenders with playoff experience was a way to combat Golden State.

"We have to remember the game is not the same anymore," Johnson said. "There's no team in basketball that can duplicate Golden State. But what you can do is try to make sure -- Houston, they really gave Golden State problems because they had guys, multiple guys, that can break the defense down. Not only shoot but also create off the dribble. And on the defensive end they were right there.

"When you think of some of the teams that had great shooting besides Golden State, all those teams really got beat. But then you look at a team like Boston who had, again, multiple ball handlers, guys that can put it down on the ground and get their own shot, they advanced all the way to the Eastern Conference finals.

"I watched every series and had to say, 'OK, the game is played different.' Then I talked to him -- he felt the same way, so now let's get guys that can handle the basketball, get their own shots, also are tough on defense, tough-minded. And that's how Rob and I decided to build the roster. So we're really happy with the additions that we have, and LeBron is really happy."

After James committed, the Lakers agreed to deals with Rondo, Stephenson and McGee while re-signing Caldwell-Pope, looking to add basketball IQ, playmakers, defenders and playoff experience. Even though the Lakers averaged just 34.5 percent from 3-point range -- second to last in the NBA last season -- management feels the team has enough 3-point shooting with Hart (39.6 percent), Ingram (39), Caldwell-Pope (38.3), James (36.7) and Kuzma (36.6).

The Lakers added veteran leadership and championship experience but also injected the locker room with some strong-willed personalities such as James and Rondo and even quirky characters such as Stephenson and McGee to go with quiet and reserved young players such as Ingram and Ball.

Johnson had no doubts about the different personalities meshing well and forming a unified locker room.

"When you think about Lonzo ... I've told everybody when we drafted him, the one thing that was missing was a mentor," Johnson added. "We really didn't have a mentor for him to really teach him and help him how to play the point guard position. And now we have one in Rondo that can really take him through how to read defenses, how to play and defend certain guys in the league at the position."

"So this is really going to be an important year for Lonzo, and I think Rondo will really help him out a lot."

As for James, Johnson sees someone who is much like himself, who has followed a similar path out of the Midwest to win championships playing team basketball and who has had success off the court as well.

"It was so funny. I think we both felt we were probably talking to ourselves," Johnson said. "We're looking at each other, and we were mirrors of each other when it comes to basketball mindset, championship DNA, playing the game the right way and also being a great teammate." 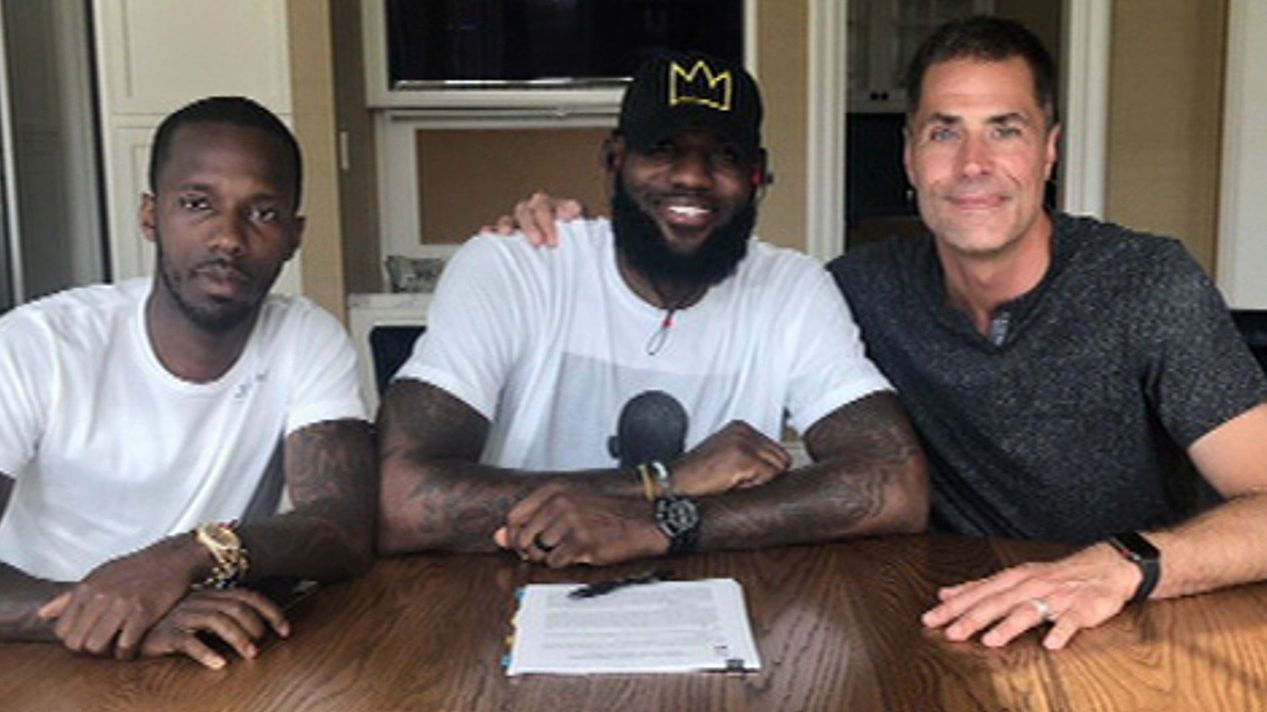