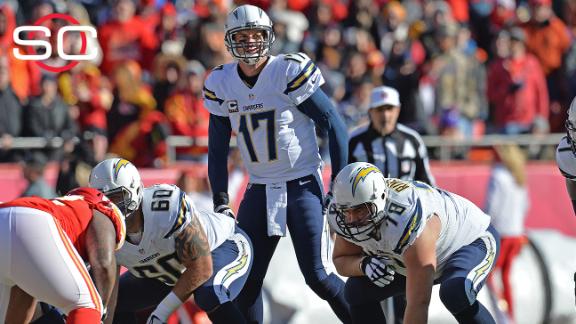 The Spanos family is negotiating to see if the team it owns, the Chargers, will stay in San Diego or move to Los Angeles. Meanwhile, quarterback Philip Rivers wants to remain a San Diego Charger but is leery about moving to L.A.

The stakes are high for the owners as they figure out the future of the franchise while trying to keep their franchise quarterback. At the start of the OTAs last week, Rivers was asked about his contract status. "There is nothing new to report," he said.

That shouldn't be surprising. If you think of the relocation talks as a race, the Rivers discussions are more of a jog. As strange as it sounds, there really isn't a true deadline for the Chargers to sign Rivers to a long-term extension as he heads into the final year of his contract. A deal could be struck in training camp, during the regular season, in the offseason or not at all.

A stadium deal needs to be figured out by no later than November or December.

The reason things can move slowly in talks with Rivers is the franchise tag. The Chargers could franchise him twice to keep him with the team at least through 2017. Both sides can work that reality to their advantages.

The franchise tag might not be popular with Rivers or his agent, but it buys time for the Chargers and gives them some leverage.

After he has collected his 2015 salary, Rivers will have banked $132.8 million in his 12 NFL seasons. With that much money, he doesn't need to rush to get his next contract, particularly with the way the quarterback market is shaping up.

If a long-term deal doesn't get done, the Chargers would have to decide whether to give Rivers the exclusive franchise tag or the nonexclusive tag. The exclusive tag prevents a player from negotiating with other teams but comes at a higher price. Currently, the exclusive tag for 2016 calculates to $25.2 million. That number, which is based off the top contracts at the position, would drop if any of the high-priced quarterbacks -- perhaps Roethlisberger, Joe Flacco or Drew Brees -- restructured their deals to lower their cap numbers for next year.

A nonexclusive tag would be more affordable but riskier for the Chargers because another team could sign Rivers, even though it would have to hand over two first-round picks to do so. Buffalo, Cleveland, the New York Jets and maybe Houston would consider giving up two first-rounders in order to sign a franchise quarterback.

Here's the way this should play out. The Spanoses first will figure out the stadium situation. Then they can come to Rivers and finalize some kind of deal. They might have to kick in a little more money in order for Rivers to put on a Los Angeles Chargers uniform. He's with Chargers fans; he wants the Chargers to stay in San Diego. Either way, it's highly unlikely he isn't playing for the Chargers in 2016.

Q: Since injuries are so prevalent in the NFL, why won't the league expand the rosters and increase the number of players who suit up on game day? Why even designate practice-squad players? Increasing the roster would allow specialists to add excitement to the game.

A: The NFL should. The current 46-man active roster is outdated. The league has kept it at 46 for competitive reasons. Old-school thought is that the smaller active roster helps level the playing field for teams with less talent depth. I don't buy that anymore. The league has expanded to 32 teams. Players at roster spots 47 through 53 are totally interchangeable and don't provide any competitive advantage to deeper teams. By midseason, because of injuries, many of those spots are filled by players promoted from the practice squad. If extra players were active on game day, some of them could focus on special teams and improve the play in that phase of the game.

Q: Why wouldn't the Vikings be interested in trading Adrian Peterson to the Cowboys for La'el Collins (first-round talent and young) and a running back (Darren McFadden or Joseph Randle)? The Cowboys would get the missing piece for their win-now strategy, and the Vikings would get protection for their young quarterback.

A: There are several problems with this kind of trade. First, the Cowboys can't fit Peterson's salary under their cap unless he restructures his contract along with taking a big pay cut. From the Vikings' standpoint, it would be too much of a downgrade at running back, even with the value that Collins would bring. McFadden signed with Dallas for backup money. Putting Collins and a running back together was smart on your part, but it doesn't add up to equal value for the Vikings. Plus, in the big picture, Vikings coach Mike Zimmer doesn't want to trade Peterson.

Q: Is the NFL bound to have the reigning Super Bowl champion play in the first game of the following year? The NFL knew a Tom Brady suspension was possible at the time they made Pats-Steelers the opener for the 2015 season. Now the opener seems like a dud, and the Pats may drop a huge game vs. another AFC contender. How much flexibility does the league have in selecting the teams that play in the opener?

A: The NFL has some flexibility before publishing the schedule. The NFL likes the idea of having the first game at the home of the Super Bowl champs. It is a great experience for the fans. But in 2013, the champion Ravens had a scheduling conflict with the Orioles, with whom they share parking lots, and were forced to open in Denver. I'm sure the NFL is thinking the Patriots will still draw great ratings because fans will want to see how the Patriots fare without Brady. Because it is the season opener, ratings will be strong.

Q: Thinking about Dante Fowler, can you speak a bit about the rookie contracts and when they become guaranteed? If they are not guaranteed the moment the player is drafted, then why would rookies ever participate in physical activity before their contract is signed? Could the Jaguars have technically paid Fowler less? Do you see rookies holding out from rookie camps in the future?

A: A rookie isn't part of the union until he signs his first contract, but that is a formality. The way it is set up under the 2011 collective bargaining agreement, the size of rookie contracts is predetermined, and the higher picks get fully guaranteed deals. That was one of the trade-offs owners made in exchange for having a lower rookie salary pool. Technically, the Jaguars could have offered less guaranteed money to Fowler, but I don't see a team ever doing that. If you take a player as talented as Fowler with the third pick of the draft, why anger him? If the Jaguars tried to lowball Fowler, his agent would remember and never consider having his client sign an extension. Since the new CBA was implemented, teams have stayed true to the slot at which the players were selected and have given them the proper contracts.

Q: Since the statistics support the fact that PATs and field goals inside 30 yards are so easy to convert, why not narrow the width of the goalposts similar to indoor leagues rather than back up the PAT? Accuracy would be more significant with narrower uprights. There is more to it than just having a strong leg.

A: The competition committee and the league considered narrowing the goalposts. The NFL tried it in the Pro Bowl as an experiment, and that move probably ended that option. Narrowing the goalposts would take away too many points by making all field goals more difficult. The league doesn't want extra-point conversions to drop below 90 percent, and I don't think it wants to see field goal accuracy drop below 80 percent.

Nick in East Stroudsburg, Pennsylvania, is tired of missed calls by officials. He suggests putting a head official in a sky box to overrule blown calls on the field. It won't happen. The league doesn't want penalties to be reviewed because it prefers them to be judgment calls on the field. Such a move with a head official in a sky box also would add too many delays to the game.

Don in Phoenix wants to know how the loss of a first-round pick affects next year's rookie pool for the Patriots. It will be no different than if they'd traded a draft pick for a player. Their rookie pool will be reduced by the amount that would have been slotted to the lost draft pick. For example, using this year's allotment for the 32nd overall pick, the Patriots wouldn't have to pay for a four-year, $3.796 million contract that had a $969,169 cap hit.