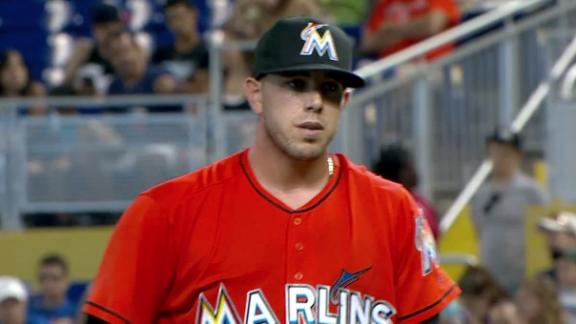 Marlinsstar pitcher Jose Fernandez was a patron at a Miami River bar and restaurant the same night he and two friends were killed in a boat crash, a spokeswoman for the establishment confirmed Tuesday.

A friend of one of the victims said he warned him against the post-midnight trip, and Marlins center fielder Marcell Ozuna said he and at least two other teammates turned down invitations to go and tried to discourage Fernandez from going out.

"It was a bad decision for him," Ozuna, perhaps Fernandez's closest friend on the team, said. "He heard everybody say, 'No, go back to your house and take it easy.' Then you wake up and see the news.''

Ozuna said all of the players knew Fernandez planned to go out on the boat that night.

"Everybody knew he was crazy about that boat and loved being out on the water," Ozuna said Monday, as quoted in the Miami Herald. "I told him I couldn't go out that night because I had the kids and my wife waiting for me."

Fernandez apparently had concerns he might be late to the ballpark for Sunday's 1:10 p.m. game, because he asked Ozuna for a wake-up call.

American Social Bar & Kitchen spokeswoman Dana Rhoden said in an email that Fernandez was there before the accident. The statement did not say whether Fernandez had been drinking or what time he left.

The bar is along the Miami River in the city's downtown section and allows boats to dock alongside.The Miami-Dade County medical examiner has not yet released toxicology results that might determine whether Fernandez or the other two victims were under the influence of alcohol or drugs.Authorities previously said no evidence of alcohol or drugs was found at the crash scene.

A friend of Rivero's, Will Bernal, first told Yahoo! Sports that they texted each other shortly after midnight, before the trio pushed off. Bernal posted the messages Tuesday on social media.

"Try to keep [Fernandez] close to shore if you go out," Bernal wrote back.

Bernal then asked Rivero to turn on his "find iPhone" application and to "keep Jose cool."

Bernal also told the Miami Herald that he thinks Fernandez might have been stressed Saturday night after an argument with his girlfriend.

The Florida Fish and Wildlife Conservation Commission still is investigating the accident. Spokesman Rob Klepper said in an interview Tuesday that there's no timetable, and "we will provide a complete and thorough investigative report."

U.S. Sen. Marco Rubio asked for an investigation into the safety of the rock jetty off South Beach. In a letter Wednesday, the Florida Republican asked the Coast Guard and Army Corps of Engineers to closely examine the jetty, which he says has long been a hazard to boaters. Rubio said the danger is particularly acute at night when the low-lying rocks are difficult to see.

The Coast Guard has said navigational aids meant to guide boats away from the jetty at the mouth of Miami's port were working when the crash happened early Sunday.

The 32-foot boat named "Kaught Looking" -- the "K" is backward, signifying a strikeout when the batter does not swing -- will be thoroughly checked for clues as to why the accident occurred, authorities said. Miami-Dade County prosecutors have obtained search warrants for wildlife commission investigators seeking access to the vessel, said Ed Griffith, a spokesman for the state attorney's office.

"As you know, FWC has a duty to investigate fatal boating accidents like this one," Griffith said in an email. "Since the incident involved a single boat and there were no survivors, there can be no criminal prosecution derived from the FWC investigation."

Klepper said the wildlife commission has no record of any previous citation or warning involving the boat, Fernandez or the other two men who died. Normally vessel stops are not documented unless a warning or citation is issued, he added.

Klepper also said the toxicology report would be part of the wildlife commission's completed investigation.

The Marlins announced a public viewing will be held Wednesday at a Miami church, preceded by a funeral procession scheduled to start at 2:16 p.m. outside the team's downtown ballpark. Fernandez wore No. 16 on his jersey.

A private funeral will be held Thursday for the Fernandez family and Marlins players and personnel.

On Capitol Hill, Florida's U.S. senators, Democrat Bill Nelson and Rubio, introduced a resolution Tuesday honoring Fernandez for his journey from communist Cuba to Major League Baseball stardom and his contributions to the community.

The resolution notes that Fernandez was jailed in Cuba after an unsuccessful attempt to defect and once saved his mother from drowning after she fell from a boat off Mexico's Yucatan Peninsula.

"He risked his life escaping tyranny in Cuba to seek liberty and opportunity in America," Rubio, also a Cuban-American, said in a news release.

Ocean Rescue Division Chief Vincent Canosa said the bag was given to a lifeguard and that it apparently came from the boat.

Enormously popular in Miami's large Cuban-American community, Fernandez defected from Cuba at age 15, won the National League Rookie of the Year award in 2013 and became a two-time All-Star. He had been scheduled to pitch Monday night against the New York Mets, a game that instead became a tribute to him and remembrance of his life. I-5 at Grapevine closed in both directions due to heavy snow
Safety measures in place with weather system to hit Fresno Co. mountains
Hiker who went missing at Yosemite National Park found dead
Mono winds destroy Oakhurst home, forcing out single mother and her twins
Outdoor dining ban may be driving increase in COVID cases, some scientists say
Show More
Ambulance involved in crash while responding to crash in Fresno County
Biden to lift ban on transgender people serving in military
Anti-face mask protest held at Sprouts in North Fresno
Baby abandoned on the side of the road found by Amazon driver
Fresno Co. educators, farmworkers must wait longer for COVID vaccine
More TOP STORIES News