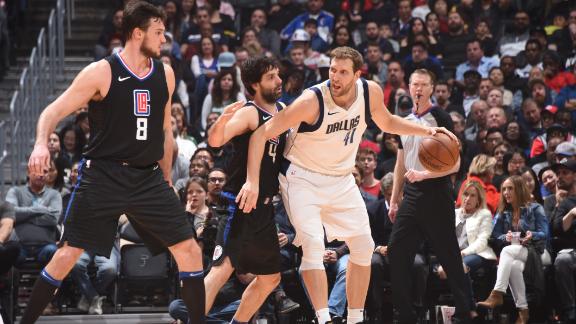 Dirk Nowitzki joined another exclusive NBA club when he reached the 50,000-minute milestone on Monday night.

Nowitzki, who has played for the Dallas Mavericks his entire 20-year career, became the sixth player to play at least 50,000 minutes in his NBA career in a 104-101 loss to the LA Clippers.

Nowitzki needed to log seven minutes to reach the milestone, which he achieved in the second quarter of the game. He finished the night with 25 minutes, scoring 12 points on 4-for-11 shooting.

Despite Nowitzki's big night, the Mavericks blew a nine-point lead late in the fourth quarter to drop to 17-37 on the season. Nowitzki's last name on his jersey was also misspelled -- it read "Nowitkzi."

The other NBA legends in the 50,000-minute club are Kareem Abdul-Jabbar, Karl Malone, Kevin Garnett, Jason Kidd and Elvin Hayes.

"I just really believe Dirk's record of high level of excellence, of longevity, durability, is one of the most remarkable I've ever seen in sport,'' Mavericks coach Rick Carlisle said after the game.

Nowitzki now ranks fifth all time in minutes, having passed Hayes, who played exactly 50,000 minutes in his Hall of Fame career. Abdul-Jabbar holds the record for minutes, with 57,446.

As for the jersey mishap, Nowitzki told reporters: "I usually look at my jersey, so I never even saw it myself. It happens. I guess it kind of sums up our season."

Misspelled name or not, the Clippers were in awe of Nowitzki's accomplishment.

"That's crazy,'' said Clippers coach Doc Rivers. "It really is amazing. I mean, I don't know how he gets up in the morning. And he had hard minutes because he was the guy other teams were trying to attack every night.''

"Amazing,'' Clippers forward Danilo Gallinari said. "I've been playing against him not just in the NBA but overseas, so it's been a lot of battles, especially with the (Italian and German) national teams, too. He's a legend, a Hall of Famer. For us growing up in Europe, he's one of the best ever."

Nowitzki, the sixth-leading scorer in NBA history, has been remarkably durable throughout his two-decade career.

During an 11-season span that started in his second season, Nowitzki missed a total of 29 games, averaging 37.5 minutes per game. Nowitzki has missed more than nine games in a season only twice. He missed 29 games in 2012-13, including the first 27 games of the season after undergoing arthroscopic knee surgery. Nowitzki was sidelined a total of 28 games last season, primarily due to persistent soreness in his Achilles tendon early in the season.

At age 39, Nowitzki is averaging 24.9 minutes per game, his fewest since his rookie season. The Mavs are in a rebuilding phase, but Nowitzki has continued to be productive, averaging 12.1 points and 5.6 rebounds per game with an effective field goal percentage (.544) that ranks as the third-highest of his career.

Nowitzki, who has said several times that he hopes to be healthy enough to play at least one more season, is on pace to join John Stockton and Michael Jordan as the only players in NBA history to play all 82 games at age 39 or older.