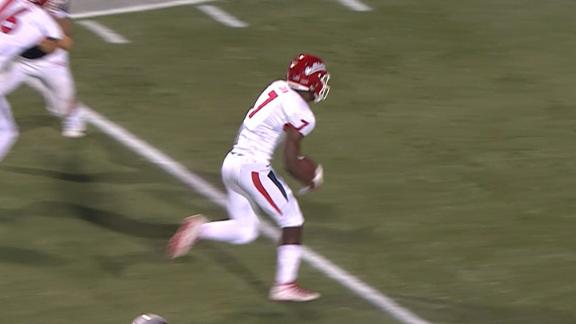 LAS VEGAS -- Marcus McMaryion threw for two touchdowns and 274 yards, while the Fresno State defense had a near-perfect game as the No. 20 Bulldogs cruised past UNLV 48-3 on Saturday night.

Fresno State (8-1, 5-0 Mountain West) won its seventh straight and ended its two-game losing streak to the Rebels. The Bulldogs kept their one-game lead in the West Division over San Diego State, which won at New Mexico 31-23 Saturday night.

McMaryion completed 26 of 35 passes and rushed for 39 yards as his defense held UNLV to 175 total yards of offense through three quarters.

KeeSean Johnson had eight receptions for 97 yards to move his streak to 45 consecutive games with a catch. Coming into Saturday, Johnson led the nation in active career receptions at 234.

Fresno State's defense only allowed the Rebels over midfield twice in the first three quarters. The first time ended on a missed 46-yard field goal, the other drive ended at their 49-yard line.

The Bulldogs opened the scoring quickly on its first possession on a 6-play, 45-yard touchdown pass from McMaryion to Jamire Jordan down the middle 4:21 into the game. On the first play of the second quarter, Fresno State made it 14-0 on a Ronnie Rivers 2-yard rush around the right end. Asa Fuller's 35-yard field with 36 seconds left in the half, capped it at 17-0.

On their first drive of the second half, the Bulldogs put the game away. McMaryion found Kyle Riddering wide open down the middle for a 9-yard touchdown pass just 4:09 into the half to make it 24-0.

On the next play after Jaron Bryant's 40-yard interception, Fresno State upped the lead to 31-0 with a 5-yard Josh Hokit scamper around the left side with 8:22 remaining in the third.

UNLV's only scoring opportunity in the first half came on that 46-yard missed field goal by Evan Patels in the first quarter. They later reached the red zone in the fourth quarter, ending with a Patel field goal.

Fresno State: The Bulldogs earned their first win at UNLV since 1996 and have won 17 of their last 20. Last year, Fresno State lost to the Rebels at home, 26-16. Coach Jeff Tedford is now 7-0 in Mountain West road games. This was the 20th straight game the Bulldogs holding opponents below 30 points a game. Fresno State is now 14-7 all-time against UNLV.

UNLV: The Rebels had won three of their last four against the Bulldogs. After winning the first two of three, UNLV has now lost six in a row. The Rebels have two road games ahead at San Diego State and Hawaii, before finishing at home against instate-rival Nevada.

The Bulldogs are the only California team in this week's Associated Press' Top 25 poll. They look to move up a few spots with this win. Fresno State last reached the poll last November after defeating Boise State. This was the second time the Bulldogs reached the poll since Dec. 2013.