Miller: Dear Bryce Harper -- what were you thinking?! 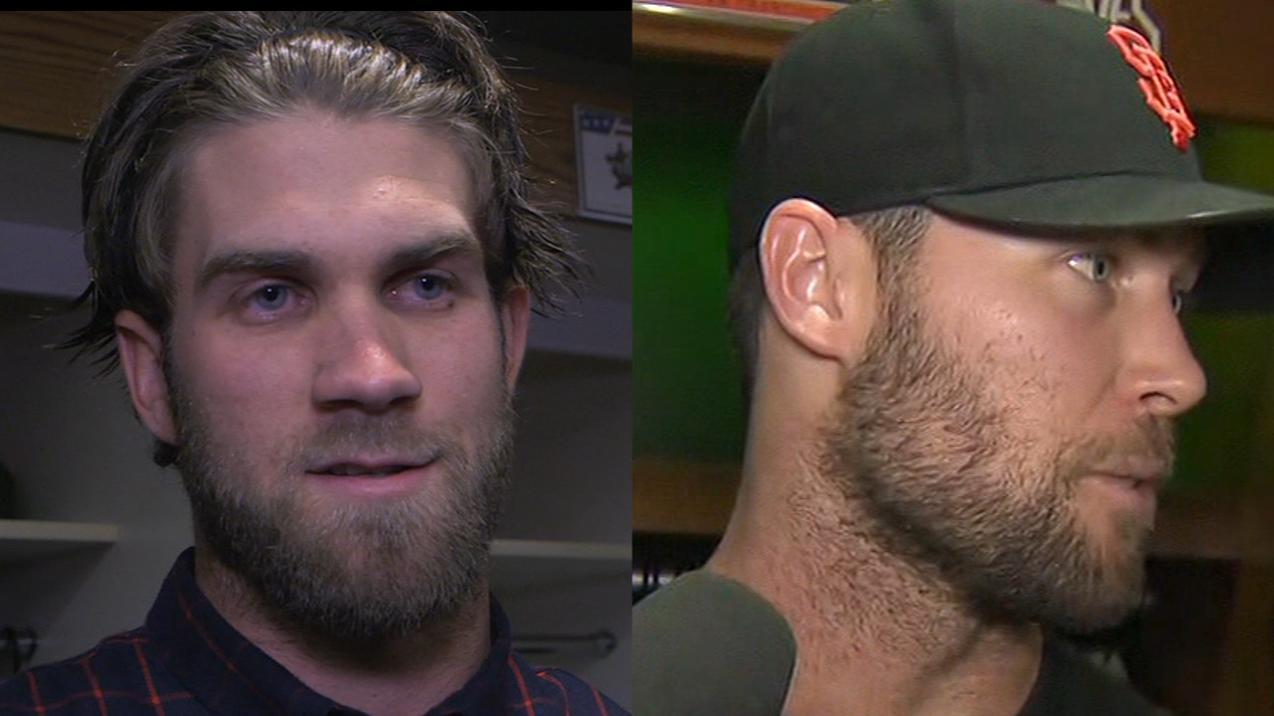 I am as shallow and as easily amused as anybody else, so I can admit I like your dumb fights. Keep doing your dumb fights. Do them to make me happy. But my dude, I'd be a bad friend if I didn't tell you: You look dumb out there.

You're my guy, so I've got to tell you that you look pretty good when that ball hits off your hip and you don't even flinch, let alone cry or ask the umpire for a hug. And you look pretty cool when you point out at the mound. You are the type of guy who isn't afraid to point out at a guy and tell him you're not afraid to point at him. I can't help but be impressed; I'm afraid of that guy, and I would not point. You pointed. Not bad, my man.

Then you flip the bat. You look pretty cool flipping that bat. So nonchalant; you're in control of that bat. You have large biceps and strong thighs and you make that bat look so inconsequential, and in doing so, you've made the pitcher look small and inconsequential. I like the look, my dude. You look cool.

And then, my dude, you take off your helmet and, uh-oh, now you're starting to look awkward. Now you've got to charge, and it's a long way between you and your enemy, and you've got that problem we've all got when we walk into a business meeting or a job interview and the room is just too long and you don't know what to do with your hands. When is it too early to reach your hand out for the shake? Should you make small talk on the way? Should you button your jacket up or unbutton it? Is it too late to check your fly? You've got to figure out, in the middle of this stressful and unfamiliar situation, just how long your strides should be and what your pace should be.

You end up getting self-conscious; the guy is just staring at you, waiting. Is it too late to turn back? It is too late to turn back! Your hands! Why are your hands so empty? So you grab your helmet. Now you're holding a helmet. What are you supposed to do with the helmet? Are you supposed to smash the guy in the face with it? Flip it so that it will bounce in your wake, out of the way? Put it back on? Throw it?

My dude, I can't believe you decided to throw it. You can't throw a helmet. Have you ever tried throwing a helmet? First off, it's not easy. The round part is slippery and way too wide to palm; the straight part, the bill, is way harder to grip than you're expecting. It's only about an inch and a half deep at the deepest point, and as thin as a cheap butter knife, impossible to get a good throwin' hold on. And you're wearing batting gloves, so you don't even get that tactile adaptability that skin provides. You could work on your batting helmet throws all spring training and you'd still be no more accurate than Jon Lester throwing to first.

But second off, you didn't work on your batting helmet throws all spring training. You worked on hitting, fielding, throwing baseballs, running bases, and it is because you worked on those things that you are an elite baseball player -- elite at hitting, fielding, throwing baseballs, running bases. That's how it works: The things you do a lot, you become elite at. The things you've never done, you're terrible at. Don't do those things in front of the world! Do them in your garage until you get good at them, then join the televised helmet-chucking circuit.

But, my dude, you've only just begun looking like a first QWOP attempt. Because after throwing the helmet roughly into your own dugout, you're about to run into a guy who has been waiting his entire life -- well, the past four seconds of his entire life -- to punch you. He is ready! Unlike you! You are still half-trying to figure out whether you'll need to allow for the slope of the mound and worried about trying to punch from the wrong foot and, because you bat left but throw right, trying to decide which hand you even are, and hoping that the helmet will hit him, and still truly undecided between punch and kick and tackle and going and getting the helmet to rethrow it. Also, your stupid helmet throw has left you off balance, so you're going to get hit in the face with a punch right around the time you decide.

You can't look cool getting hit in the face with a punch, my dude. Didn't you think this through at all? This is you, my guy:

So now it's your turn. You're going to punch the other man, and then you'll get your swag back. But, my guy, I hate to be the guy who reminds you of this: You just got punched -- in the face. You are off balance, your brain is about 40 percent askew, your eyes have blurred up and the guy you're about to punch is now moving unpredictably because he just threw the full force of his body into your face. This is not going to be the punch you've always imagined throwing. You will not give him the ol' one-two. You will do an errant short-arm punch that, if you're lucky, will not catch your own face on the recoil. You will look like you are grabbing at a mosquito in the dark, and we will see it. You will punch like a guy trapped in a well trying to grab a ledge 4 feet out of his reach.

My friend, I do not judge you for this terrible punch. I can't punch. I'm happy to not be able to punch. Most of my best friends can't punch, and my very best friends wouldn't punch even if they could. Don't punch! But my man: If you want to punch, consider what it will cost you to punch. All the people in the world who can punch, or who think they can punch, will see you try to punch and will know that you can't punch as well as they (think they) do. They will not think you are cool.

We've reached the point, my dude, where nothing good is going to happen. Your hair is flopping around, your countenance is making all sorts of rage faces that look extra funny in a freeze-frame, and by now the photographers are getting every split second of it in perfect focus. You and everything you have built -- the eye black, the hyperstylized hair, the "clown question, bro" -- is all fading into a meme. You just put your hand on the orb, pal.

The memes are not going to be "check out the tough guy" memes, because the internet is fueled by irony. A tough guy looking not tough is meme rocket fuel. Every frame that makes you look bad will be retweeted. You have signed up for this.

In fact, there's only one way to salvage the situation, my guy: You've got to take this pitcher down. Remember, he's as bad at this as you are; he's just as unprepared, as polluted by adrenaline, as unpracticed in the art of on-mound martial arts as you are. So steady yourself and deliver that one shot to the face so powerful he drops to the ground. You'll stand over him, Ali towering over Whoever That Was, and that's the picture that leads USA Today's sports page tomorrow. You made some mistakes to get here, but you can still do this, my dude.

You put your left hand out to steady your target. You swing with your right. You get him in the face. For the type of person who likes this stuff, this is the good stuff. You did it. You ... wait, you're falling backward. You punched him in the face and he hardly budged, while you fell backward. He is a wall; you are a handball. My dude. My dude, what have you done, my dude?

My guy: The batter never comes out of this looking good. The pitcher usually doesn't, but I can at least name one Nolan Ryan. Check out my dude Manny Machado here, skipping to the mound and then swinging wildly with his eyes closed and his face staring at the sky:

Here's my dude Pedro Martinez missing with his helmet from literally 1 inch away:

Here's my guy Kevin Youkilis, charging for so long and with so little effort that he eventually just falls over under the waifish pitcher, just a few feet from first base, where he should have gone originally:

Those are just the first three I found, and they're all pretty embarrassing. As they should be: Fighting is hard. Doing hard things on television will almost always embarrass you. An industry is built on that very idea.

My dude, do what you've got to do. But I'll tell you this: There are good reasons and bad reasons to not do things like you just did. The good reasons aren't going to convince you. The bad ones might. 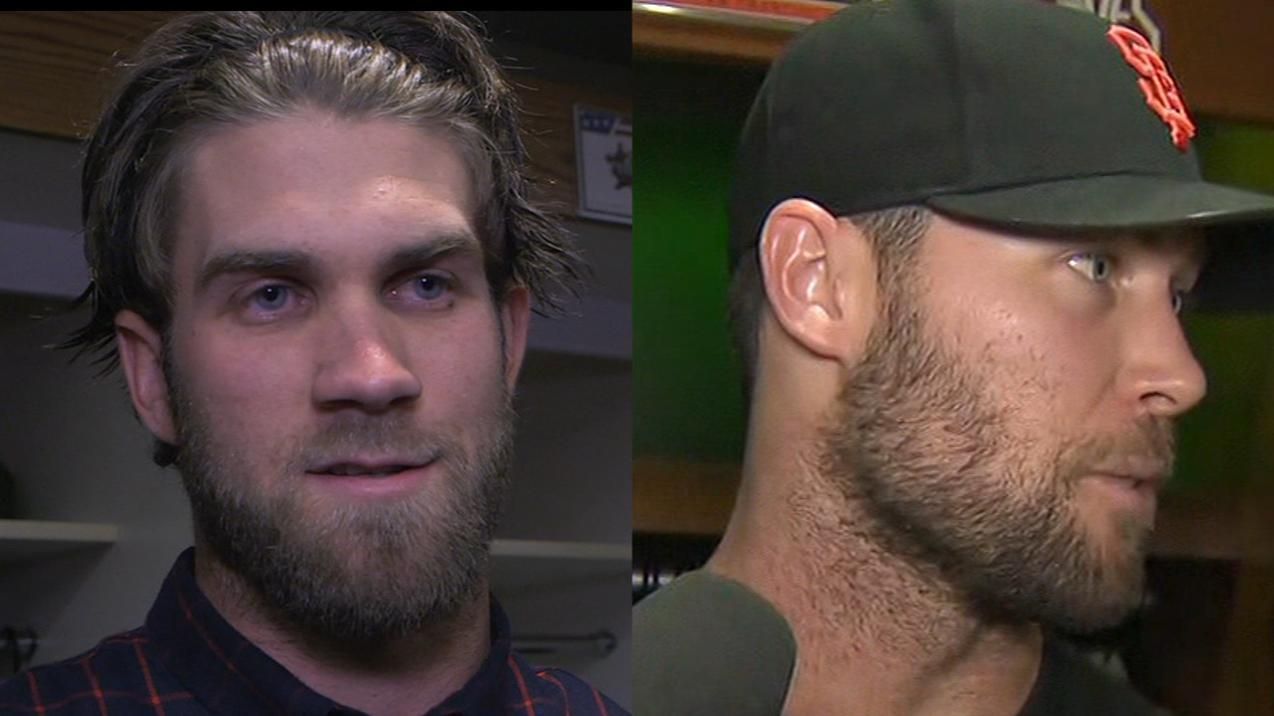