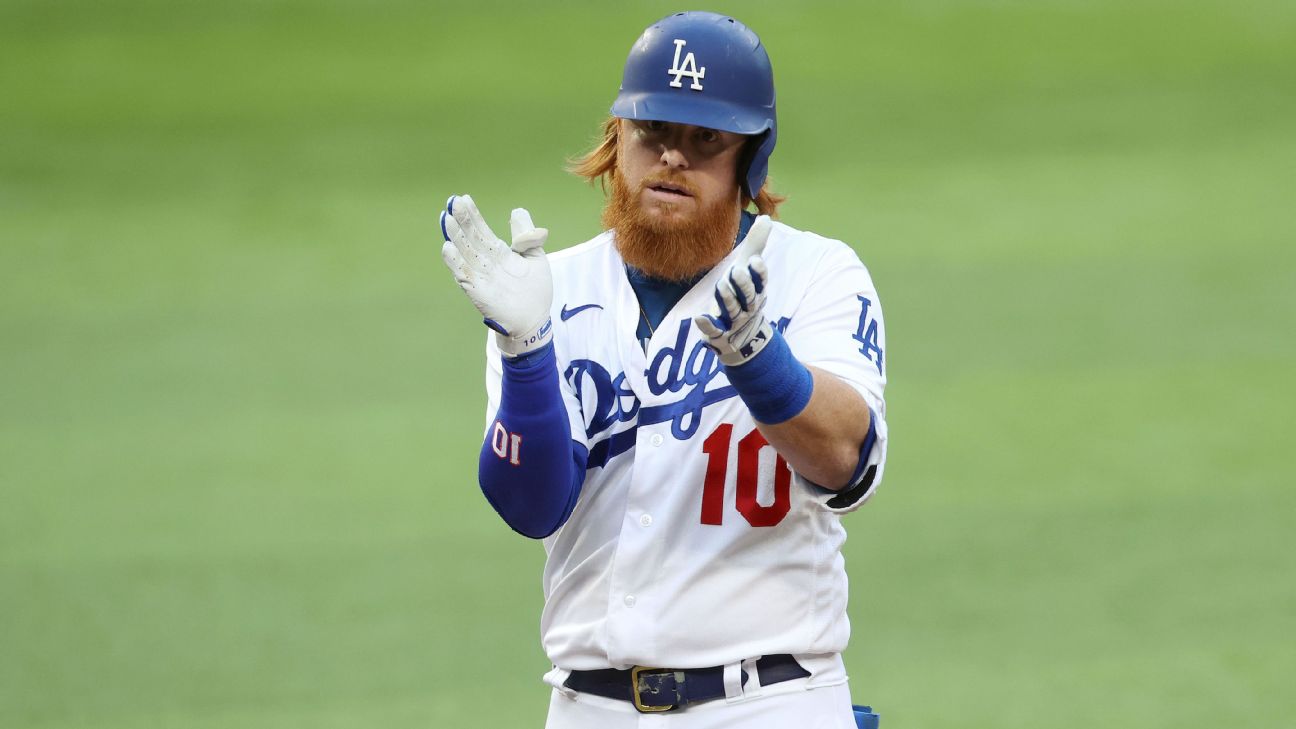 It's Wednesday in league championship series week in the 2020 MLB playoffs, and two teams have yet to notch their first wins. With one more win, the Rays could complete a sweep of the Astros and earn their first pennant since 2008. The Braves are aiming for an upset, having jumped to a 2-0 lead over the favored Dodgers.

Here's a breakdown of the games, some numbers to know, a hot take of the day and more as you prep for Wednesday's twin bill.

We get two young starters in Wright, who threw six scoreless innings against the Marlins in the NLDS but had a 5.21 ERA in eight starts in the regular season, and Urias, who has allowed one unearned run with 11 K's in eight innings in the postseason. His big matchup will be Marcell Ozuna, who has hit .333/.439/.813 against lefties. For Wright, it's all about throwing enough strikes, especially his two breaking balls. He averaged 5.7 walks per nine innings in the regular season and had a couple of early walks against the Marlins, but he escaped damage, throwing his curveball and slider nearly half the time.

How both managers handle their bullpens will be fascinating. The Dodgers' pen had a 2.74 ERA in the regular season, but Dave Roberts suddenly doesn't know whom he can trust. Do you overreact or stay the course? You certainly won't see Alex Wood, who never should have seen the field in Game 2, even in a 6-0 game (he gave up a run, which proved costly). Given the dire circumstances, Roberts is probably looking at Dustin May, Victor Gonzalez, Blake Treinen and -- yes --Kenley Jansen as his options. That might leave Roberts without a starter for Game 5 (assuming Clayton Kershaw goes in Game 4), but if you need May to win this game, you have to use him.

Brian Snitker has to be mindful of the potential for seven games in seven days, but he can still have a quick hook with Wright. The Braves are carrying 15 pitchers, and the bullpen has not been too stressed these first two games (though you know he hated using Mark Melancon to get the final out in Game 2). If it's close in the fourth or fifth, the Braves should consider pulling Wright and going for the kill and a 3-0 lead -- even if Games 4 and 5 shape up as bullpen games.-- David Schoenfield

As good as the Astros looked against the A's, when they bashed the ball all over the park, the first three games in this series have shown why they finished 29-31. They haven't hit enough, and when they have hit, they hit into some bad luck. Jose Altuve has made two critical throwing errors that the Rays have taken advantage of -- three unearned runs in Game 2 and the five-run sixth inning in Game 3. (Only one of the runs was unearned, but Altuve's bad throw to second base opened the floodgates.) We might see Aledmys Diaz at second base with Altuve the DH.

Zack Greinke gets the ball, and he says his arm feels fine, but he has lasted four and 4 innings in his two playoff starts -- a sign that Dusty Baker will have to go to his shaky bullpen early. Meanwhile, all the Astros have to do on offense is figure out Tyler Glasnow, who will be starting on regular rest after throwing 37 pitches on two days' rest in Game 5 of the ALDS. Of note: This could be the final game for this core of Astros players. George Springer, Michael Brantley and Josh Reddick are all free agents, and Justin Verlander, of course, will miss the 2021 season. That doesn't mean it's the end of this run of success, but the 2021 Astros could look a lot different than the 2020 Astros. --Schoenfield

This is where greatness must shine. The 2016 Cubs, winners of 103 games and trying to break a 108-year curse, were down three games to one in the World Series. The 1998 Yankees, winners of 114 games, were down 2-1 to the Indians in the ALCS. The 1986 Mets, winners of 108 games, lost the first two games of the World Series at home to the Red Sox, yet rallied to win (with a little help in Game 6). We now think of those three clubs as among the best of recent decades.

The Dodgers are a great team -- have been a great team for several years now -- but regular-season dominance is not the same as postseason glory. Maybe that almost dramatic, ninth-inning rally will get the bats going -- certainly, Max Muncy (.143 in the postseason until his home run) and Cody Bellinger (0-for-8 in the series before his triple) needed those hits. I think the Dodgers will come out swinging and knock around Kyle Wright. They get back in the series.-- Schoenfield

The first sacrifice bunt of the 2020 postseason:Manuel Margot's in Game 3 of the ALCS, which also happened to be the first sac bunt by a Rays player this year.

The Dodgers' ninth-inning rally against the Braves' bullpen mop-up crew made the final score interesting, but Atlanta's 8-7 win sealed a 2-0 NLCS lead after the offense pounced onTony Gonsolinearly. Gonsolin was on the hill because scheduled Game 2 starter Clayton Kershaw was scratched because of back spasms. Can the Dodgers come back? They think so.

The Rays are one win away from an ALCS sweep of the Astros after their 5-2 victory to take a 3-0 series lead. Tampa Bay scored all of its runs in a wild sixth inning, plating one of the runs on consecutive hit batters and benefiting from another throwing error by Astros second baseman Jose Altuve. The Rays also stymied the Astros at the plate, putting on a show on defense.

Randy Arozarena has gone from an unknown outfielder to this October's breakout star. Coming into the playoffs, you might have been asking, "Who is this guy?" but the Rays' trade for him has been a huge factor in their postseason dominance. Since Sept. 1 across regular-season and postseason games, Arozarena is second among MLB hitters and tops among those on playoff teams with a 1.194 OPS, beating Atlanta's Freddie Freeman, who's No. 3 overall at 1.166. Arozarena's four postseason home runs have already made a big impression, but Arozarena also leads all hitters in the postseason with 35 total bases (and is leading in hits and extra-base hits). Also,he has been flashing some leather in the outfield and some sweet celebration dance moves on the field. 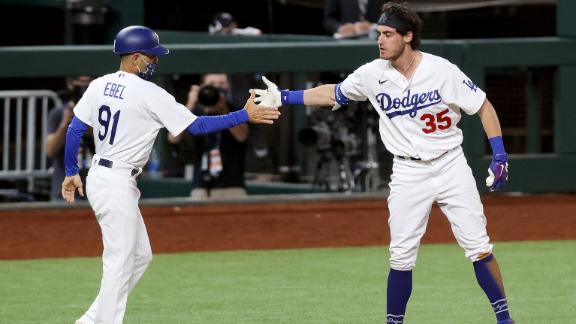 Dodgers' ninth-inning rally comes up short
Corey Seager's double, Max Muncy's home run and Cody Bellinger's triple get the Dodgers within a run, but A.J. Pollock grounds out to end the game, with the final score 8-7. 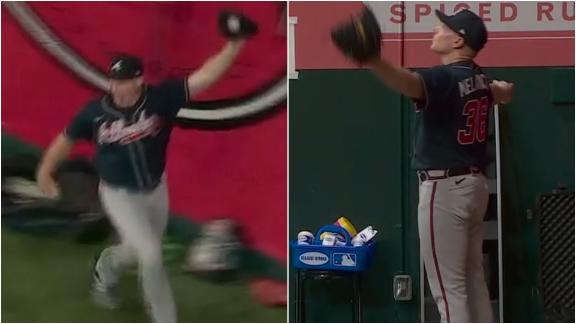 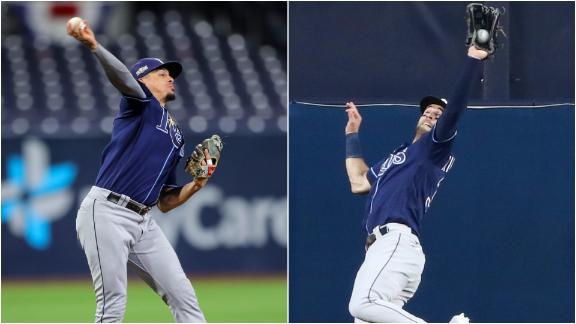