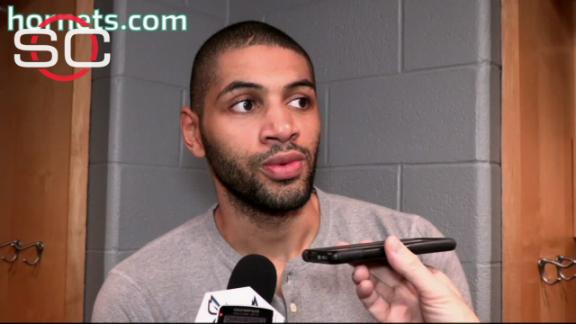 The shock and sadness that rippled around the world after the terrorist attacks in Paris reverberated around the NBA amid a full slate of games Friday night.

Star players and veterans with ties to France expressed their sorrow and concern as the details and news of the tragedy continued to unfold.

LeBron James said he was hopeful for a time when "people will realize that's not the right way."

"My prayers and condolences go out to every family that's been affected by what happened," James said after his Cleveland Cavaliers played the Knicks at New York. "Our world right now is having so many different tragedies. So many different innocent people and victims are losing lives over nonsense."

The Saint-Etienne, France native was worried about the safety of his family in Paris. He didn't get confirmation they were all safe until after New Orleans' loss at Toronto, and he was especially concerned for a cousin who was at the soccer friendly rocked by the sound of nearby explosions.

"It's just a crazy world. You think you're safe, you're just walking down the street and the next thing you know, people start shooting," Ajinca said. "My prayers go to my family and friends."

Ajinca wrote "Pray for Paris" on his sneakers and asked his Twitter followers to "Pray for my family and friends" prior to the game.

"During the whole game I was trying to get this out of my mind so I was able to stay focused," Ajinca said after he had 10 points and nine rebounds in the loss.

"It felt weird. I was thinking about it the whole game."

Nicolas Batum, the Charlotte Hornets swingman and native Frenchman, said he was watching the France-Germany soccer match online and heard one of the blasts as the attacks happened.

"I'm fine, but I'm not because we lost people for nothing," Batum said after the Hornets' game against the Chicago Bulls. "Stupid people, and I don't know why they are doing that. We've got to stay strong. I tried to show people in my way that we're strong and we won't [back] down because you are doing bad stuff to people. We'll keep our heads up, step forward and say we're better than that."

Batum said one of the first things he did once he stepped on the floor for Friday's game was speak to Bulls center Joakim Noah, who grew up in France and whose father, Yannick, is the former French tennis great.

"[It's] very sad what's going on in Paris," Noah said. "A lot of people died for no reason. We're not really sure exactly what happened. So just calling family before the game, making sure they're all right."

Noah said he texted with his father, who is currently in Cameroon, and that his family members who are in Paris are fine.

"Until the last minute before the game, I was on my phone checking out everybody in my family," Batum said. "My sister lives close by where one of the attacks happened. The first thing I did [after the game] was check my phone to make sure everything was good.

"I thought about it all game. I wanted to [have] a good game to show them in my way 'We're strong.'"

The series of attacks were the deadliest to hit Paris since World War II. At least 120 people were killed in multiple acts of violence, including shootings at restaurants and a hostage-taking at a music venue. The number of casualties is expected to rise.

Houston Rockets second-year center Clint Capela, who grew up near Paris, said he had spoken to relatives who live in Paris about the unprecedented attacks.

"It hurts me a lot," Capela said prior to the Rockets' game against the Denver Nuggets.

"It was last year, the same thing happened," he added, referencing the January terrorist attack on satirical newspaper Charlie Hebdo and a kosher grocery that left 20 dead, including the three attackers. "That's hard for me because this is like my country because I grew up there. I have relatives up there in Paris, a city like that, means a lot. I have some cousins over there, family. It's really bothering me. I'm really sad about that, that's hard."

Caplea was born in Geneva, Switzerland, grew up in Chalon, France, and played high school ball at Bois de Vincennes, just outside of Paris.

Capela said he would visit Paris during the summer months once school was over.

Knicks forward Kevin Seraphin, a native of French Guiana who plays on the French national team and owns a home in France, said he was wracked by a feeling of helplessness.

"It's kind of scary because there's nothing you can do about it," Seraphin said. "You just think about how some people went to see a soccer game or went to see a comedy and are not coming back home; you don't really expect that. It's just scary. People are kind of scared to go out or to just do anything."

Seraphin did not play in Friday's game and said that, for once, he was content to sit on the bench.

"I don't want this to happen often, but I was kind of happy that I wasn't in the game because it was kind of in my mind," Seraphin said. "You try to smile. At one point, I was like, 'That's my job.' But it was on my mind during the game."

Carmelo Anthony said the Knicks were focused on helping Seraphin through what was and will continue to be an emotional time.

"It's just a tough, unfortunate situation," Anthony said. "I try not to go into details, but for me and for the guys on the team, it's kind of take care and make sure that our teammate that has family over there and people over there is OK, knowing our prayers are with him and his family.

Information from ESPN's Calvin Watkins, Dave McMenamin, Ian Begley, Nick Friedell and The Associated Press was used in this report.

It was a tough day for Batum
Hornets forward Nicolas Batum addresses the Paris attacks, which took place in his native country of France.