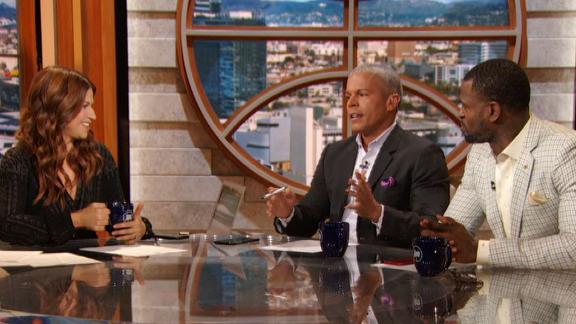 In NBA.com's annual GM survey, 93 percent of those who responded say the Warriors will win the NBA title this season. That's the highest margin in the 16-year history of the survey, according to NBA.com.

Fifty percent of GMs who voted in the survey say Cleveland's LeBron James will win the MVP. Russell Westbrook, last year's MVP, wasn't one of the top five vote-getters in this year's survey, which is likely a reflection of the Oklahoma City Thunder adding fellow All-Stars Paul George and Carmelo Anthony.

"Every year [LeBron's] the guy that you would look at and say he's right at the top," Cavaliers center Kevin Love said. "Best player, best athlete in the world. He's going to come in and do the same thing, lead this team. We've got a bunch of new guys, a bunch of new faces, but at the end of the day that's not going to change the way he goes about his business."

In addition to winning this season's MVP category, James was voted by GMs as the league's best passer, best leader, toughest to plan for, best small forward (and second-best power forward), most versatile and the player with the highest IQ.

Other categories of interest: 29 percent of NBA GMs voted for Minnesota's Karl-Anthony Towns as the player they'd pick today to build a franchise around. Towns led the category for the second consecutive season. Milwaukee's Giannis Antetokounmpo was voted second, receiving 21 percent of the vote.

Towns also won the voting in the "most likely to have a breakout season" category, receiving 21 percent of the voting. New York's Kristaps Porzingis and Indiana's Myles Turner tied for second in the voting (14 percent).

Sixty-two percent of GMs said Los Angeles Lakers guard Lonzo Ball will win Rookie of the Year, and the Timberwolves are favored to be the most improved team vote (69 percent). GMs voted Oklahoma City as the team that made the best overall moves in the offseason; Thunder GM Sam Presti acquired George by sending out Victor Oladipo and Domantas Sabonis and acquired Anthony by sending Enes Kanter, Doug McDermott and a 2018 second-round pick to New York.

GMs chose George as the new offseason acquisition likely to have the biggest impact, and Denver's signing of Paul Millsap was voted as the most underrated player acquisition.

It's worth noting that general managers were not allowed to vote for their own team or players in the survey. Percentages are based on the overall number of responses rather than all 30 GMs.